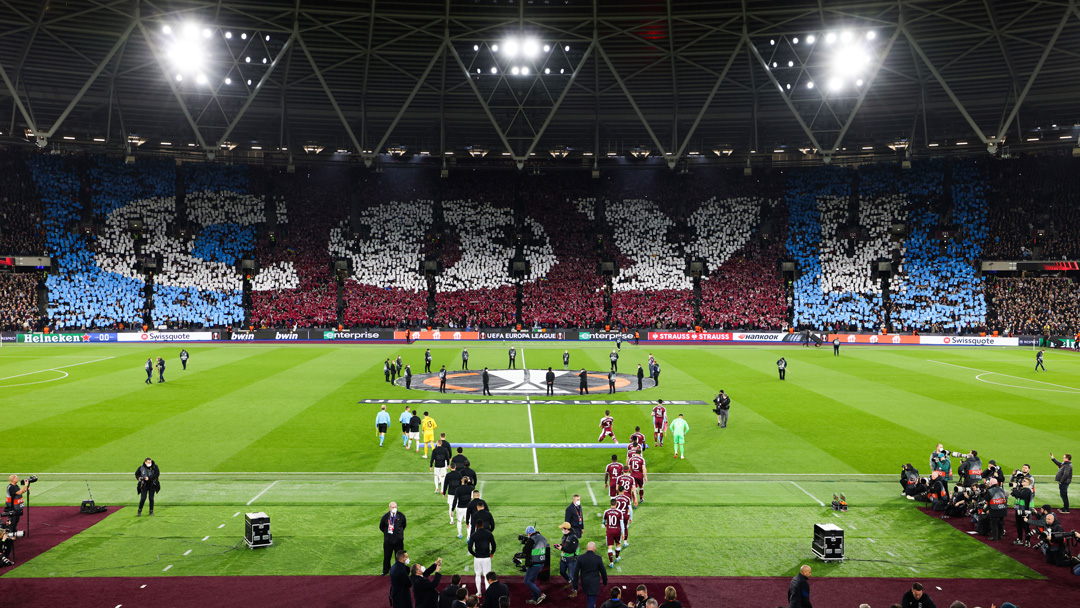 The significance of the occasion could be felt in the very air at London Stadium hours before kick-off. The wall of noise that greeted the home team, made by the largest ever home crowd in West Ham United history, was quite unlike anything ever heard in Stratford before.

Undoubtedly inspired by the belief of the West Ham faithful, David Moyes’ men set to work and went on the early charge. A first set-piece of the match, taken by Aaron Cresswell, was frantically scrambled away by Sevilla and met with a thunderous applause by over 59,000 members of the Claret and Blue Army.

The La Liga team’s first attack came through Ludwig Augustinsson. The full-back won the ball from Manuel Lanzini and played across to Jesus Nava. The Sevilla captain could only scoop his shot well over the crossbar.

West Ham’s pressure continued and Antonio turned himself into a position to run at the Spanish side’s back-line. There was a smooth piece of interplay with Saïd Benrahma before the Algerian dinked into the path of Pablo Fornals. His first-time volley was well blocked. 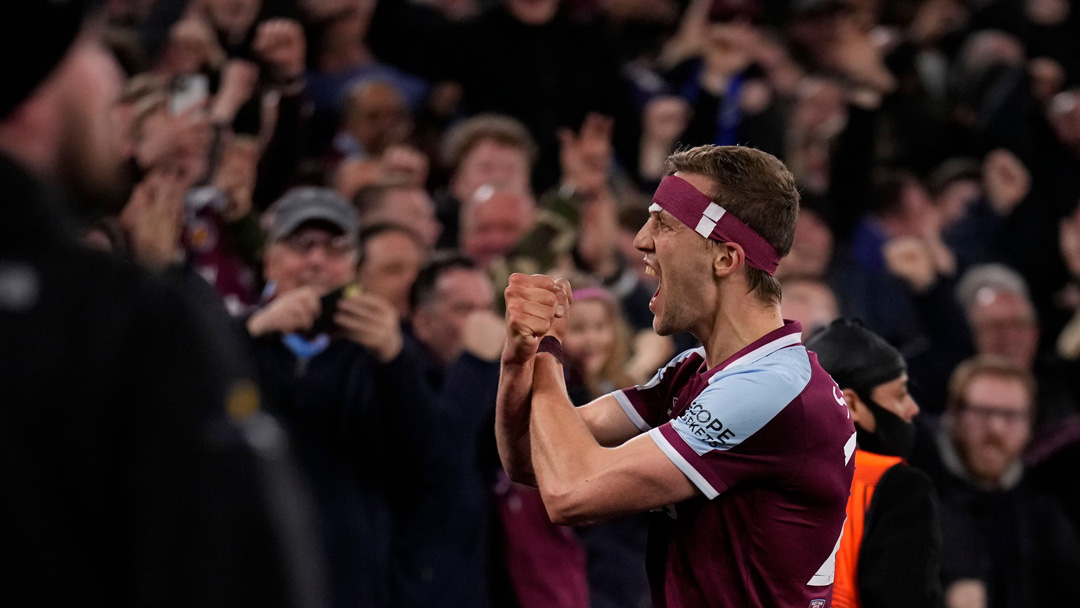 Antonio and Benrahma again combined for another opportunity on the Sevilla goal, only for the ball to be poked away from the No22 before he could pull the trigger.

In truth, Sevilla should have taken the lead and doubled their aggregate advantage on 27 minutes. Augustinsson was the creator again, pulling a cross back across goal for Youssef En-Nesyri to hit sweetly from around 12 yards. Alphonse Areola stood big, stuck out his right palm, and made a sensational stop.

Just two minutes later and the Irons should have taken the lead. Benrahma played a cute ball into the path of Antonio, who squirmed a shot on target amid pressure from the Sevilla defence. Somehow, Yassine Bounou got a hand down to the effort, and Souček’s attempt to turn home on the rebound was denied by Nemanja Gudelj.

Despite the chance slipping away, the home side continued to push. The home support continued to chant and cheer. On 39 minutes, the pressure finally came good.

Once again, Antonio could claim credit for sensational work. The No9 took possession on the edge of the ‘D’ and headed wide to the left. Drawing in the tackle, the forward dinked a delicious ball over the entire Sevilla defence, finding Souček.

The Czech Republic international rose highest, looping in a well-placed header to give us the lead on the night and send London Stadium into elated euphoria. 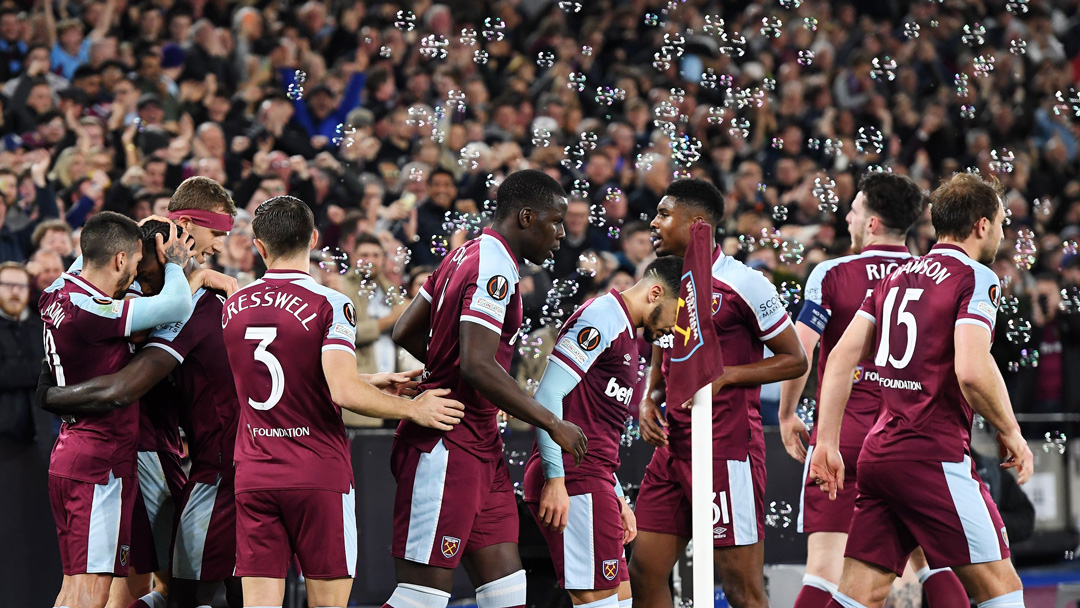 The half-time whistle was met with another yell of approval from the home support. A fantastic effort in the first half came with a deserved reward.

It only took 20 seconds of the second half for the Irons to test Bounou again, as Souček drove into space in the left midfield channel and fired on goal. His rocket was straight at the Sevilla shot-stopper, but he could only palm it out as fire as Rice, who turned his rebounded effort wide at the near post.

The home pressure continued. Antonio had another chance to shoot, seeing it blocked, before Aaron Cresswell sent the follow up wide. The No9 then brought the ball down into the path of Lanzini. His left-footed efforted was palmed away and his second attempt blocked.

The Irons were not deterred. Still we knocked. Corner after corner for the home side. Cresswell even came within a matter of inches from netting direct from one of his trademark set-pieces.

The Spanish side’s first effort of the second half came on 70 minutes when Tecatito fired over, following hold up play from En-Nesyri. The away side seemed content to slow play down, manage the game and seek a slow breakthrough the resolute Hammers.

Sevilla’s pushes into the attacking third left space for counter attacks and Benrahma will wish he had done a bit better with his curling effort on 86 minutes, after Cresswell played him through in space on the left. 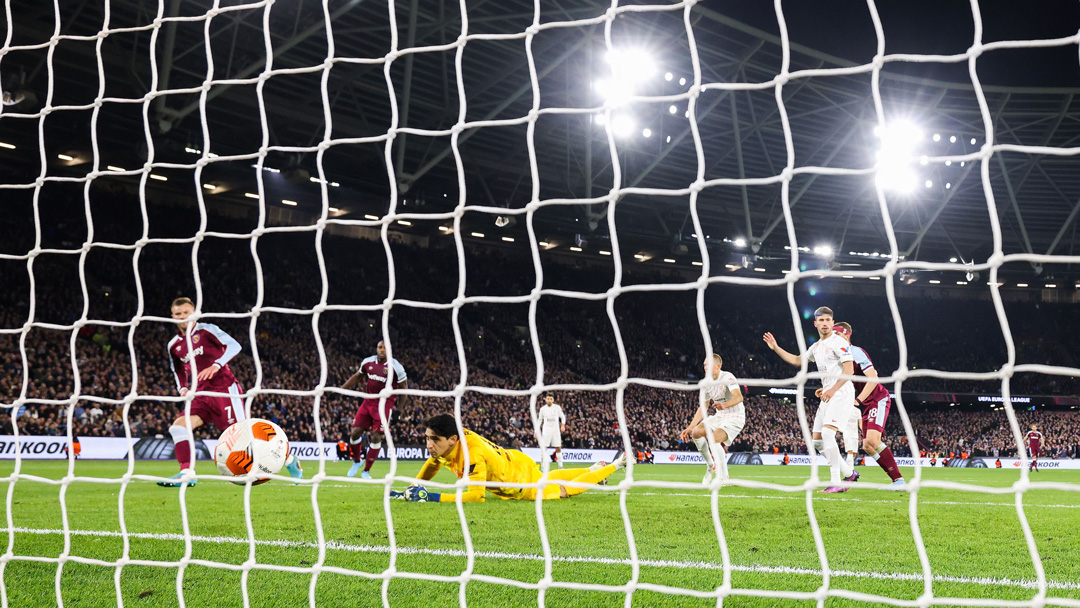 Souček’s goal was the difference at the end of 90 minutes. Extra time awaited at London Stadium.

Moyes’ lads may have found themselves in uncharted waters in Europe but the story remained the same. Still the home team pressed. Antonio could not get the ball out from his feet, while corner after corner came in.

With 98 minutes on the clock, Souček came within inches of being the hero. A Fornals corner was into Craig Dawson. The centre-back headed into the ground, and Souček followed in. His header was agonisingly wide.

Fifteen minutes came and went, and the second period of extra time began. Rice tried to make his mark, firing over from 25 yards shortly after the restart.

The moment the home crowd had been waiting for came on 112 minutes. Lanzini superbly switched the play to Fornals, who drove at the Sevilla defence and tied to curl home. Bounou saved, but Yarmolenko was there to turn the ball past his outstretched glove and into the back of the net.

Pure joy radiated through London Stadium as the crowd willed the final whistle. Amidst an evening of loud support, the cheer that came at the very end was the noisiest, the most passionate of the entire match.