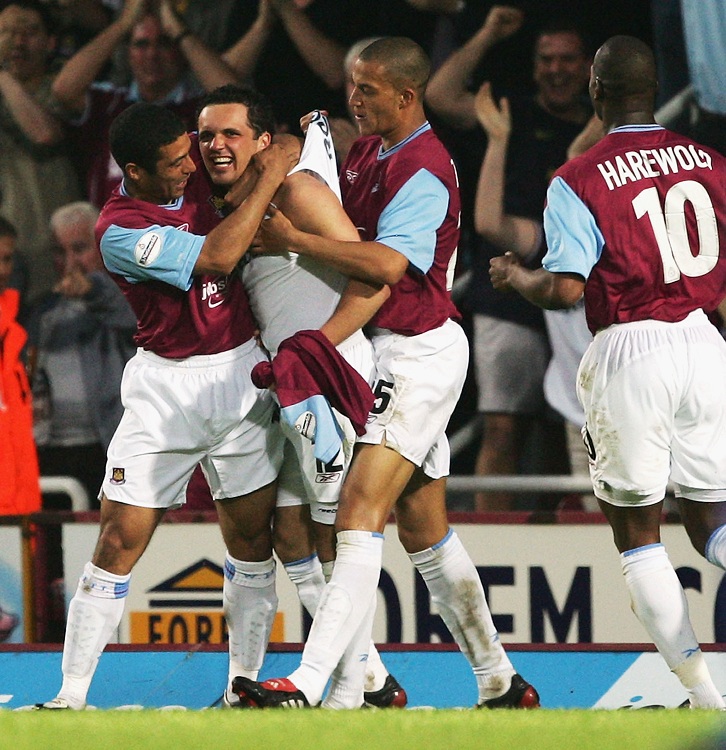 West Ham United’s hopes of reaching the 2004 Division One Play-Off final hung by a thread following a 1-0 first-leg defeat at Ipswich Town.

Alan Pardew’s side had finished the regular season in fourth place, one point and one place above the Tractor Boys, but it was Joe Royle’s team which held the advantage come the second leg at the Boleyn Ground on the evening of Tuesday 18 May.

What resulted was not only a dramatic West Ham victory on the night and on aggregate, but also one of the most memorable nights in the historic stadium’s 100-year history.

A pulsating game saw both teams create the chances needed to take them through to a final date with Crystal Palace, but it was Pardew’s Hammers who took theirs to book their place at Cardiff’s Millennium Stadium.

In a riveting first half, and roared on by a deafening Claret and Blue Army, West Ham escaped as Darren Bent fired an early chance wide to create a succession of opportunities to go ahead on the night and level the tie overall.

When the half-time whistle blew, West Ham still trailed and had just 45 minutes to save their season.
Shortly after the break, Pardew was celebrating on the touchline when Etherington controlled Michael Carrick’s short corner and slammed an angled drive past Davis and into the far corner of the net.

Moments later, Pardew was in the crowd after captain Dailly had stabbed a deflected left-foot shot into the net after the visitors had failed to deal with an Etherington corner.

West Ham were ahead in the tie for the first time and, after Ian Westlake had rattled the post with a rasping added-time volley, the manager and his players were able to enjoy their achievement with the vast majority of the 34,002-strong crowd, who had played such a huge role in roaring their heroes through to the final.