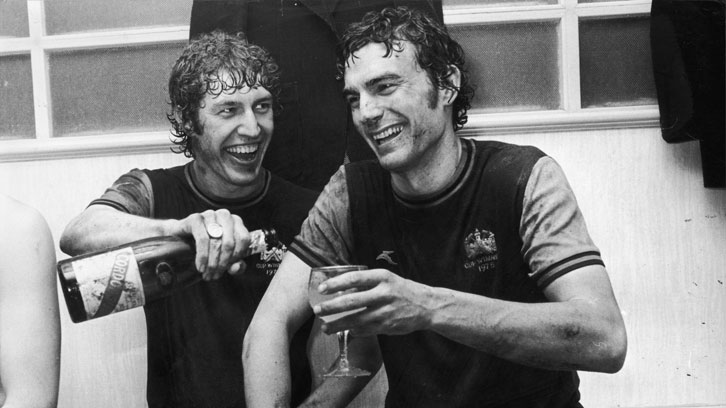 A quick glance at the history books suggests the 1975/76 season was not a particularly successful one for West Ham United.

In the First Division, the Hammers stumbled to an 18th-place finish, just six points above the relegation zone, with just 13 victories from 42 league matches.

In the FA Cup, the holders were humbled 2-0 by Liverpool at the Boleyn Ground in the third round, while Tottenham Hotspur proved too strong at the fourth-round stage of the League Cup.

While home comforts proved hard to come by domestically, the European Cup Winners’ Cup provided the Claret and Blue Army with some welcome enjoyment.

Finnish Cup winners Lahden Reipas and Soviet trophy winners Ararat Yerevan of what is now modern-day Armenia were beaten 5-2 and 4-2 on aggregate respectively before Christmas.

The competition then went into a four-month hibernation before resurfacing in early March 1976. Then, West Ham were drawn to face Dutch Cup winners Den Haag – this at a time when football in the Netherlands was a real force in continental and international competition – in the quarter-finals.

John Lyall and Ron Greenwood’s side travelled across to Holland for the first leg and found themselves four goals down within 42 minutes! A second-half brace from Billy Jennings gave the Londoners hope for a miraculous comeback on home turf.

With an optimistic 29,829 crowd inside the three-quarters full Boleyn Ground, Alan Taylor, Frank Lampard and Billy Bonds completed the turnaround before Shoenmaker’s goal set up a dramatic climax. The Hammers held on, though, to go through on away goals to face West Germans Eintracht Frankfurt in the semi-finals. 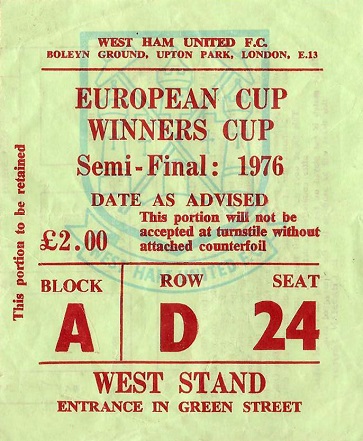 Frankfurt themselves had breezed through the tournament, winning all six of their ties in brushing aside Coleraine of Northern Ireland 11-3 on aggregate, Atletico Madrid of Spain 3-1 and SK Sturn Graz of Austria 3-0.

Domestically, though, Eintracht were not quite going so well, and would finish mid-table in a Bundesliga dominated and retained by West Germany’s team of the mid-70s, Borussia Moenchengladbach.

As such, West Ham were up against a team who knew how to rise to the occasion in Europe – just like themselves

The first leg was played at Eintracht’s historic Waldstadion home on Wednesday 31 March 1976 in front of an expectant crowd of 45,000, including a number of travelling Hammers.

Those who had made the trip were cheered by an early goal from their heroes as Graham Paddon collected Trevor Brooking’s pass and thrashed a left-foot rocket past 35-year-old goalkeeper Kunter from all of 30 yards.

Having gone ahead, West Ham spent most of the remainder of the game trying to repel the home side, with their own stopper Mervyn Day making a series of important saves.

However, Day was powerless to prevent Neuberger from dancing along the edge of the penalty area and rifling a low shot just inside his left-hand post to level on 28 minutes.

Jennings then had a goal disallowed for offside before, two minutes after the break, the West Germans were in front through midfielder Wolfgang Kraus.

Pat Holland then saw another goal chalked off in controversial circumstances, as replays suggested the midfielder did not handle the ball as he challenged the goalkeeper.

Rain fell steadily all day on Wednesday 14 April 1975 – so much of it fell, in fact, that there was some doubt as to whether or not the semi-final second leg would go ahead. 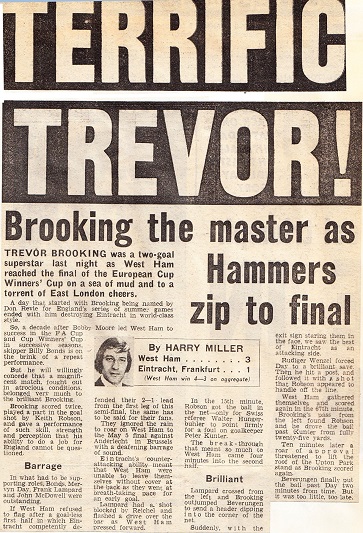 Four minutes after the break, though, West Ham finally made the breakthrough they required. Lampard collected in the inside-left position before curling a cross into the box, where Brooking leapt and sent an inch-perfect header looping into the top right-hand corner.

The tie was level on the night and, as they had done against Den Haag, the hosts were set to go through on away goals - but the Hammers wanted more…

First, Brooking launched a perfect diagonal pass for Keith Robson, who was clean through on goal but initially appeared to run past the ball.

The midfielder steadied himself, however, controlling the ball on the muddy surface before swinging his trusty left boot at the ball and firing it high into the far top corner, giving Kunter no chance.

With 12 minutes remaining, Tommy Taylor’s quickly-taken throw was played back to him by Graham Paddon and the defender set Brooking away with a fantastic through ball.

“It’s a beautiful pass from Taylor, a perfectly timed run by Brooking. It’s here that he keeps his head, there that he shows his skill and there that he almost certainly makes it safe for West Ham.

“It’s three-nil now and so much for the Germans to do.”

To their credit, Eintracht did not give in and set up another nervous climax when Beverungen pulled one back with three minutes to go, but the Hammers would not be denied.

It may be 40 years ago, but the night Brooking and Robson danced through the East End mud will forever be known as the greatest night in Boleyn Ground history.