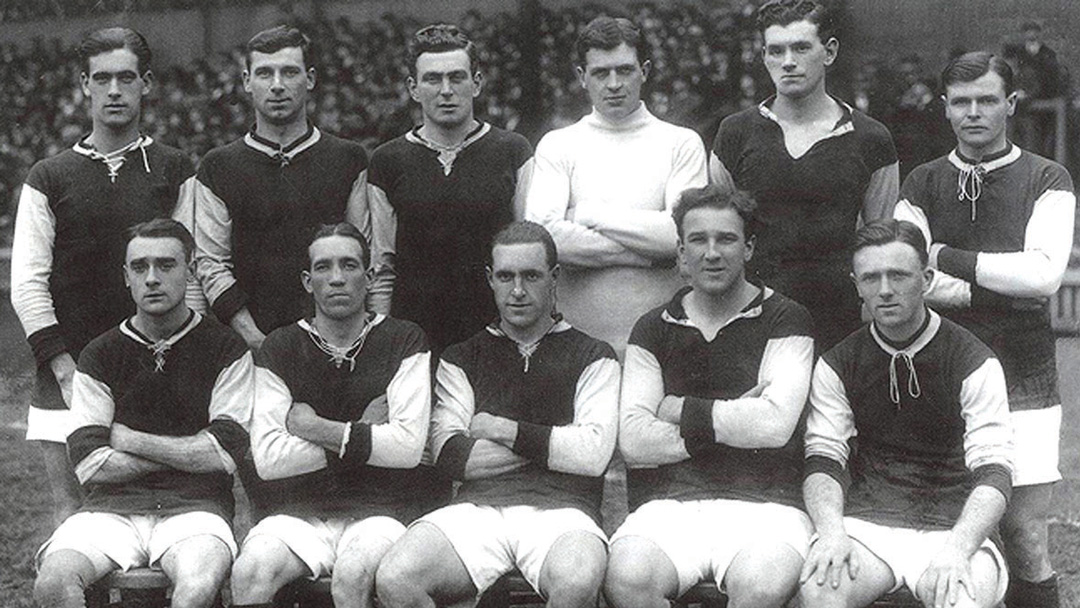 When the Football League was cancelled following the onset of the First World War in summer 1915, it consisted of two divisions of 20 clubs each.

West Ham United were not one of those 40 elite clubs at that time, as they instead plied their trade in the Southern League First Division.

The Hammers were, without a doubt, one of the biggest fish in the Southern League pond, drawing crowds in excess of 10,000 to their Boleyn Ground home. On the pitch, Syd King’s team had finished the seasons preceding the cessation of league football in fourth, sixth and third position.

When the conflict began, West Ham were placed into the London Combination, where they faced the likes of recent Football League Division One clubs Chelsea and Tottenham Hotspur and Division Two sides Arsenal and Fulham.

The men from east London thrived in such exalted company, winning more matches and scoring more goals than any other club from the capital during the four seasons of Wartime football competition.

The performances of the boys in Claret and Blue no doubt boosted the spirits of those living in east London, many of whom saw young family members head off to war and never return.

Throughout the conflict, West Ham played host to a succession of illustrious ‘guest’ players, many of whom had previous represented Football League clubs but were stationed in or near the capital during the hostilities. 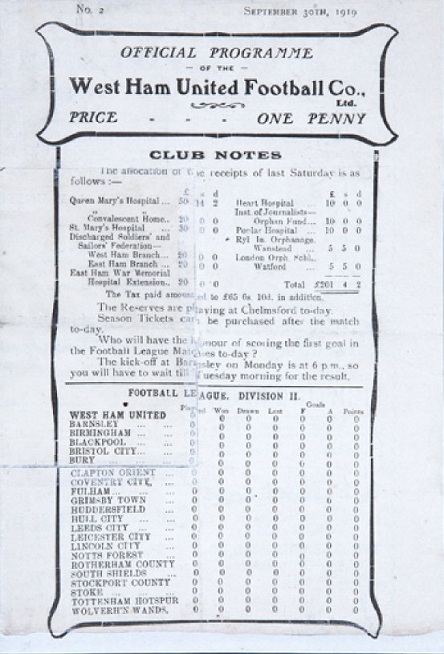 Before the War came to an end, the Football League declared its intention to expand from 40 to 44 clubs when normal competition restarted – 22 in each of the two divisions.

With thousands of supporters and influential members of the sporting press – most notably the weekly Athletic News newspaper – backing the Hammers’ cause, the Club entered the voting with some confidence.

That confidence was well-placed, as West Ham placed second to Coventry City, who had ended the 1914/15 season fifth in Southern League Division Two, in the voting. Coventry, West Ham, Rotherham County and South Shields would enter the Football League, with the Athletic News endorsing the Hammers’ successful election.

Despite the fact the competition had been suspended four years previously, the Southern League fined West Ham £500 for failing to give them notice of the club’s resignation.

The fixture list paired the Hammers with Lincoln City for their inaugural match as a Division Two club.

The Imps had finished 16th of the division’s 20 clubs in 1914/15 and were considered one of the league’s weaker sides when they travelled to east London on 30 August 1919.

A huge crowd of 20,000 descended on the Boleyn Ground, clearly undeterred by the rise in general ticket prices to one shilling.

There were plenty of reasons for optimism among the Claret and Blue Army – West Ham had a very good team, for one, led by goalkeeper Ted Hufton and centre forward Syd Puddefoot.

Born in Bow, Puddefoot had joined the Hammers from local club Limehouse Town in January 1913 and never looked back. Prior to the War, he had bagged 36 goals in 61 Southern League and cup matches.

During Wartime, his prolific scoring rate had increased to almost unbelievable levels – 100 goals in 114 games, including five in an 8-2 win over Arsenal on Christmas Day 1915 and seven in an 11-0 thumping of Crystal Palace in April 1918.

Such was Puddefoot’s prowess that he was capped by England in spring 1919, netting four goals in Victory Internationals against Scotland and Wales. Against Lincoln, however, the great marksman was blunted.

Instead, the vast majority of the 20,000 fans who turned out were stunned as unfancied Lincoln took a first-half lead from the penalty spot through Billy Chesser and held onto it until well into the second half.

After all the joy of gaining election to the Football League, there appeared a chance that West Ham would begin their lives in Division Two with an unwanted and unlikely defeat.

Just when doubts started to creep into the home crowd, West Ham equalised through James Moyes with 25 minutes remaining. The game ended in an unfulfilling yet respectable 1-1 draw.

Moyes himself would play just one further game for the Hammers before returning to his native Scotland. Indeed, he was one of an astounding 39 players to appear for the club during their inaugural Football League season.

Another, Puddefoot, quickly discovered his eye for goal and finished the campaign as the club’s leading marksman with 26, ahead of Daniel Bailey and George Butcher, who managed ten each.

King’s side would recover from their opening-day draw – and a 7-0 drubbing at Barnsley in their maiden away league match – to finish seventh in the table, just a point behind fifth-placed Bury.