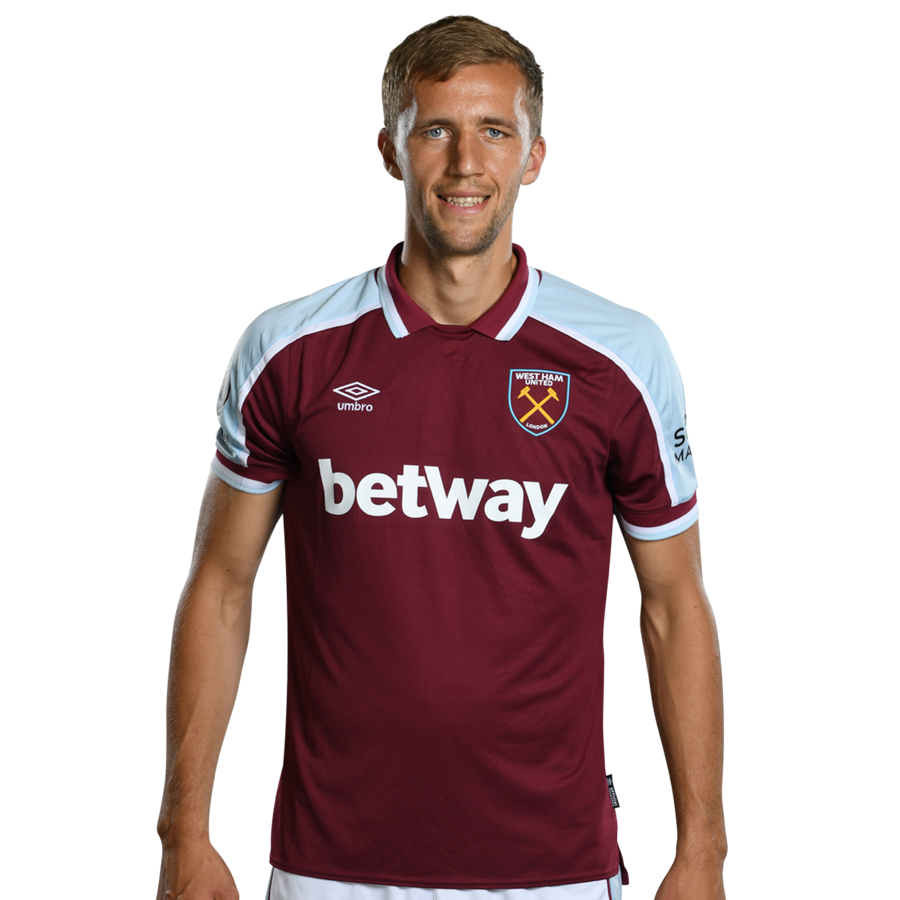 West Ham United signed Czech Republic international Tomáš Souček from Slavia Prague on an initial loan deal until the end of the 2019/20 season in late January 2020, with an option to make the transfer permanent in the summer.

The towering central midfielder won two Czech First League titles and two Czech Cups during an outstanding career in his homeland that also saw him excel in the UEFA Champions League and UEFA Europa League for Slavia.

A strong physical presence blessed with outstanding natural stamina, Souček has built an impressive reputation as an energetic midfielder with both defensive and attacking qualities.

Awarded the Silver Medal of Jan Masaryk by the Czech Ambassador to the UK, Libor Sečka for helping improve relations between the two countries on 8 August 2021...Scored West Ham United's third in a 4-2 opening-day Premier League victory at Newcastle United on 15 August 2021...Scored in Czech Republic's 7-0 friendly win over Kuwait on 11 November 2021...Scored in West Ham United's 1-1 home Premier League draw with Brighton & Hove Albion on 1 December 2021...Netted his third Premier League goal of the season in a 4-1 win at Watford on 28 December 2021...Grabbed the winning goal in a 1-0 Premier League victory over Wolverhampton Wanderers at London Stadium on 27 February 2022...Scored the opening goal in the 2-0 UEFA Europa League round of 16 second-leg win over Sevilla at London Stadium on 17 March 2022...Featured in all three FA Cup ties...Started Czech Republic's 2022 FIFA World Cup Play-Off semi-final defeat in Sweden on 24 March 2022...Scored for Czech Republic in a 1-1 friendly international draw in Wales on 29 March 2022...Scored his fifth Premier League goal of the season in a 1-1 home draw with Burnley on 17 April 2022...Appeared in eleven of West Ham United's 12 UEFA Europa League ties, starting nine...Finished the season with six goals and an assist in 51 appearances in all competitions...Named runner-up to Patrick Schick for the Czech Footballer of the Year award in May 2022...Made his 50th appearance for Czech Republic in a 2-2 UEFA Nations League draw with Spain in Prague on 5 June 2022...Started all four UEFA Nations League ties for Czech Republic against Switzerland, Spain (twice) and Portugal in June 2022.

Born in the central Czech town of Havlíčkův Brod in February 1995...Came through the ranks at Slavia Prague, and broke into their first team in 2015 following a loan spell at Viktoria Žižkov...Became a mainstay of the Slavia team, playing 29 of their 30 Czech First League matches in the 2015/16 campaign...Won his first league title in 2016/17...Made his senior debut for Czech Republic in a November 2016 friendly against Denmark...Continued his rise to prominence in the 2018/19 campaign, when a remarkable 18 goals from midfield helped fire Slavia to the Czech double and saw him named the Czech First League Player of the Year...Enjoyed an outstanding opening half of the 2019/20 season with Slavia, scoring 12 goals – including two in the UEFA Champions League against Inter Milan and Borussia Dortmund –  in 26 appearances in all competitions.