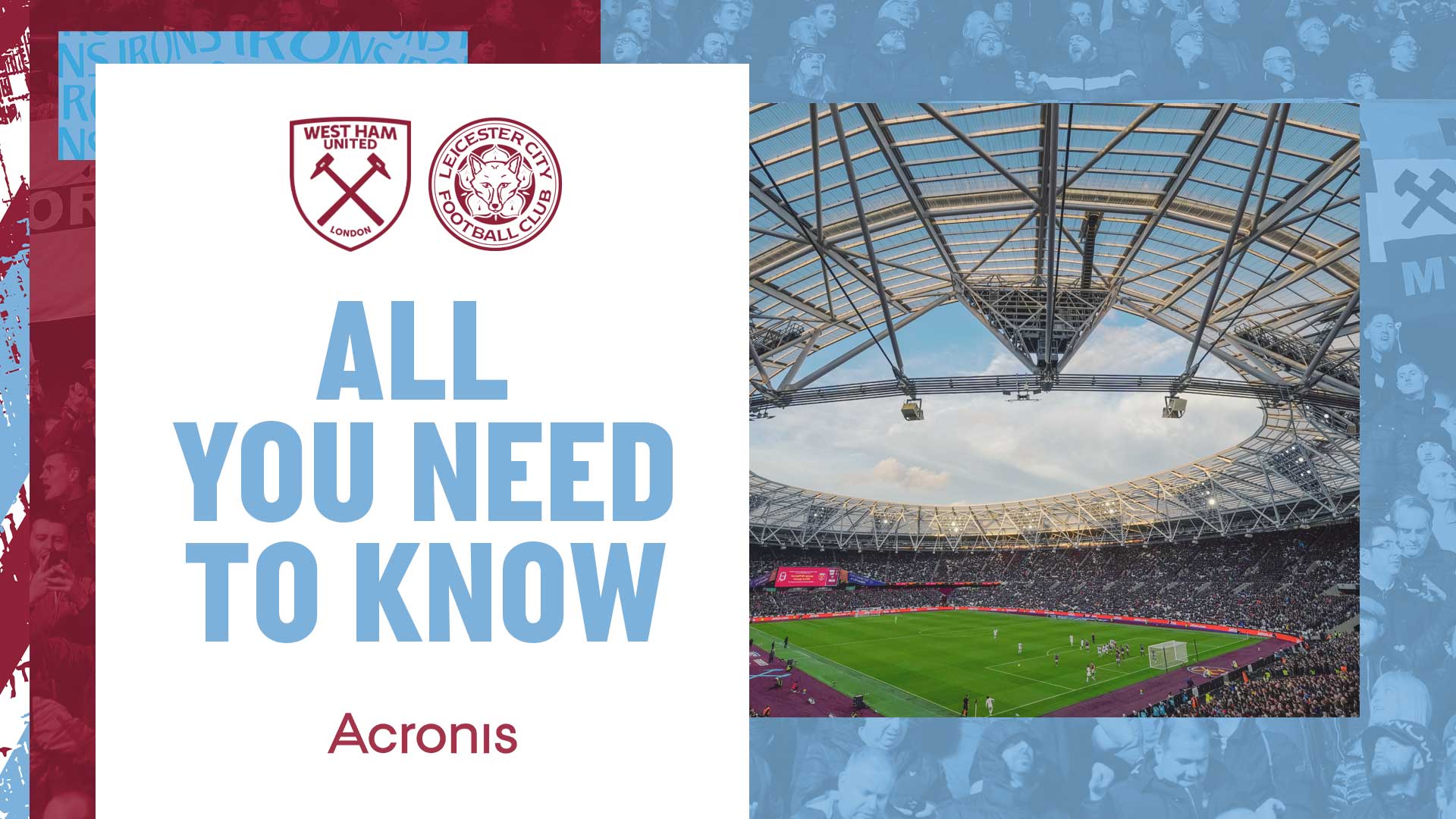 West Ham United host their final fixture before the mid-season break for the FIFA World Cup finals, with Leicester City the visitors to London Stadium.

It is a big game for the Irons, too, with back-to-back Premier League defeats by Manchester United and Crystal Palace seeing the hosts drop down the table to 15th. However, a win, combined with favourable results elsewhere, could see us go into the break in eleventh place.

Leicester, who sit one place above West Ham on goal difference, with both teams on 14 points from as many matches played, have been resurgent after a poor start to the current campaign, winning three of their previous four Premier League matches, and keeping clean sheets in four of their previous five.

Here’s everything you need to know about the fixture…

West Ham United will pay tribute to the fallen as the Club marks Remembrance Day at Saturday’s match.

Members of G Company 7 Rifles – a Reserve battalion of the British Army based in Bow – and Blesma, The Limbless Veterans, will form a Guard of Honour around the pitch.

The Redbridge Brass Band will play pitchside before Sir Trevor Brooking, Leicester City CEO Susan Whelan and a representative from Blesma lay wreaths in the centre circle. A eulogy will be read and a bugler will play The Last Post before a minute’s silence is held in Remembrance.

This Saturday, West Ham will be also collecting for the injured veterans of Blesma, The Limbless Veterans.

Blesma is one of only around ten charities that still exist of the 18,000 that were born out of the First World War. Our mission is to assist limbless and injured veterans to lead independent and fulfilling lives, by providing our Members, both young and old, with the latest advice on prosthetics, as well as practical, emotional and financial support.

If you want to support our limbless and injured veterans, visit: www.blesma.org/support.

Seats for Saturday's game are now available to buy or relist on the Ticket Exchange!

Supporters can purchase their seats on the Ticket Exchange, while Season Ticket Holders who cannot make this match can also relist their seat, allowing fellow fans the chance to be at the game and fill London Stadium with the Claret and Blue Army.

Sunday's game will NOT be broadcast live in the UK, but will be shown across the world by the Premier League's international broadcast partners. You can listen to coverage in the UK on BBC Radio London 94.9FM, on whufc.com and our official app both inside and outside the UK.

On London Underground, the Central and Jubilee lines are set to serve Stratford station as normal on Sunday, as are DLR services. However, the DLR is closed between Beckton and Prince Regent, with replacement buses operating.

Buses replace trains on Greater Anglia between Shenfield and London Liverpool Street. Elizabeth line services between Shenfield and Whitechapel are also suspended due to engineering works. Replacement buses will operate between Ingatestone and Billericay to Newbury Park, from where supporters can take the Central line to Stratford.

On c2c, Basildon line services that would normally run via Stratford to Liverpool Street will be diverted via West Ham to Fenchurch Street. Change at West Ham for the Jubilee line to Stratford.

On Southeastern, buses replace trains between Herne Bay/Faversham and Ramsgate due to engineering works.

Supporters who use southeastern services from Kent to Stratford International should note that buses will replace trains between Rainham and Strood.

Click here for the very latest on TfL services and here for National Rail.

West Ham United's only confirmed injury absentee is Ivory Coast winger Maxwel Cornet, who has been out of action since suffering a calf injury in the win over Wolverhampton Wanderers on 1 October.

Emerson is a doubt after breaking his nose in the midweek Carabao Cup tie with Blackburn.

Leicester City will be without full-back James Justin, who has suffered a season-ending Achilles injury. Right-back Ricardo Pereira is also ruled out until the New Year, while centre-back Çağlar Söyüncü (hamstring) and left-back Ryan Bertrand (knee) are also set to miss the game.

Cover star Kurt Zouma reflects on his first year in Claret and Blue and sets his sights on European glory in the New Year. Manager David Moyes and World Cup-bound captain Declan Rice pen exclusive columns, while 1966 final hat-trick hero Sir Geoff Hurst opens his Scrapbook to look back on his historic summer with England all those years ago.

When West Ham United face Leicester City, it will be a few months shy of seven years since the Foxes' title-winning heroics in 2016.

The sight of Claudio Ranieri's men lifting the Premier League was one for the ages. The 5000/1 team. Jamie Vardy’s records. Riyad Mahrez’s wingplay. Wes Morgan’s leadership. A Ranieri masterclass.

Since the turn of the century, Leicester City are the only team outside the so-called ‘Big Six’ to win the title.

But while the club’s standing continued to surge thanks to the first FA Cup triumph in their history in 2021 and the FA Community Shield a few months later, there is a feeling that the 2022/23 season may be about consolidation before the Foxes have a real go at winning things again.

Of course, much of the early season worries stemmed from a transfer window. In the summer, only Belgian defender Wout Faes – a player who has impressed in recent weeks – arrived at the King Power Stadium for a fee. After former skipper and goalkeeper Kasper Schmeichel and defender Wesley Fofana joined Nice and Chelsea respectively, there was reason to believe that Leicester City had found themselves at a crossroads under Rodgers. A club that impressed on – and off – the pitch over the last few campaigns had to consolidate before they could attack again.

In a letter to the fans ahead of Manchester United's trip to the King Power Stadium, Leicester City Chairman Aiyawatt Srivaddhanaprabha described the transfer window as ‘challenging’. He added: “The message I hope our supporters take from this is that the long-term future of your club comes before everything.”

The message of stability off the pitch seems to have worked on it as well. After one point from their first seven games, and a first win recorded, at the eighth attempt in a 4-0 triumph over East Midlands rivals Nottingham Forest, Leicester City recorded three wins – and three clean sheets – in the last four games. A 1-0 loss to Manchester City was the only blight on an impressive run.

The Foxes will therefore be aiming to qualify for European competition this season. A feat they failed to achieve last season, despite reaching the UEFA Europa Conference League semi-finals and losing to eventual champions Roma.

As it stands, Leicester are currently level on points with West Ham United – 14 from 14 league fixtures. But almost 65% of the Foxes' points have come from their last four games. And so, Leicester will hope to extend their return to form in their final match before the 2022 FIFA World Cup at London Stadium.

West Ham United and Leicester City have met 30 times in the Premier League previously, with the Hammers winning 14, the Foxes nine and seven draws.

The Irons took four points from the Foxes last season, making it three wins in succession over the Foxes with a thumping 4-1 success in east London in our first home game of the current campaign back in August last year, then grabbing a dramatic 2-2 draw away from home in February thanks to Craig Dawson's added-time goal. 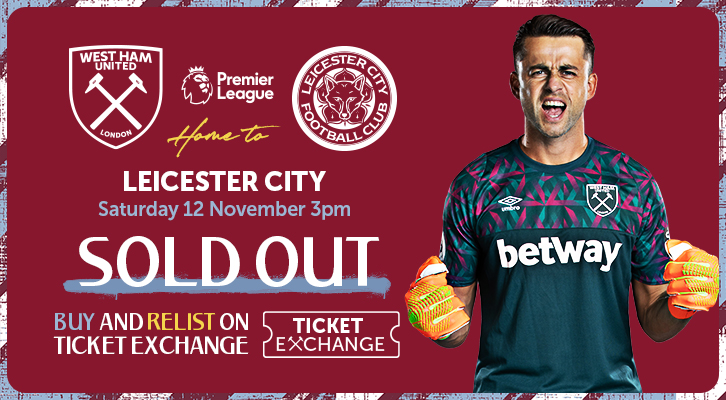