EA SPORTS' FIFA 21 is set to become available to the general public later this week - and now, West Ham United fans can see just how highly their favourite Hammers have been rated in the newest game!

With cards all carrying ratings out of 100 in six categories - pace, shooting, passing, dribbling, defending and physical attributes - the most important categories for each position are weighted to produce an overall rating in the game.

An 'in-form' Ultimate Team card of Jarrod Bowen is also available following his performance against Wolverhampton Wanderers last week, with a Team of the Week released every Wednesday evening.

West Ham United Esports have been hard at work putting together their own ultimate team of FIFA superstars this past week, with renowned players Curtis 'Paps' Poole, Jonas 'Jonna' Ghebrehiwot and Alfie 'RedLac' Calder all joining the side on Friday.

Check out the gallery above and find out the rating each West Ham United player has been given for FIFA 21!

N.B. New signing Vladimír Coufal is currently listed as a Sparta Prague player until the next squad update, but you can see his 78-rated card below: 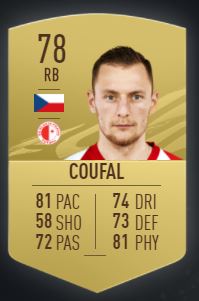