Jarrod Bowen included in first FIFA 21 Team of the Week

West Ham United winger Jarrod Bowen has been rewarded for his two-goal salvo against Wolverhampton Wanderers on Sunday by being named in the very first FIFA 21 Team of the Week.

The West Ham No20 put in a devastating display of direct running, hard work and clinical finishing to net a brace and help the Irons record a spectacular 4-0 win at the weekend against last season’s seventh-placed side.

His first goal came after just over a quarter-of-an-hour played, his darting run inside finished with a precise left-footed effort, before he doubled his tally in the 57th-minute with a well-taken finish from a rebound off the post.

Bowen has subsequently been awarded with an inclusion in the first 23-man ‘Team of the Week’ in FIFA Ultimate Team, receiving a special FUT card which boosts his base overall rating from 77 to 81.

.@atletienglish's Luis Suárez 👊@vardy7 👏
And that man @WissBenYedder 👀#FUT21's TOTW 1 is flying out the gates 😤

Bowen’s "in-form" Team of the Week card is available in FIFA 21 Ultimate Team packs as of 6pm on Wednesday 30 September, with the game only released to select players at this stage.

FIFA 21's popular Web App was also launched at the same time, with the game’s official UK and worldwide release date being Friday 9 October 2020. Some editions of the game will allow players access earlier than this. 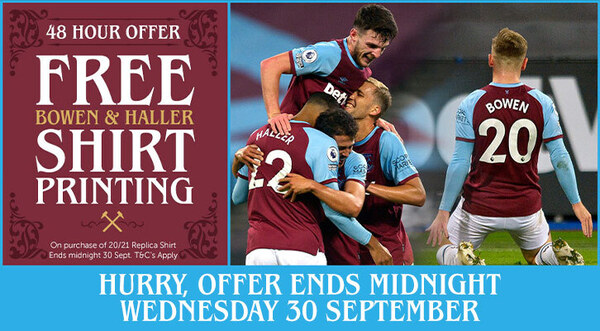