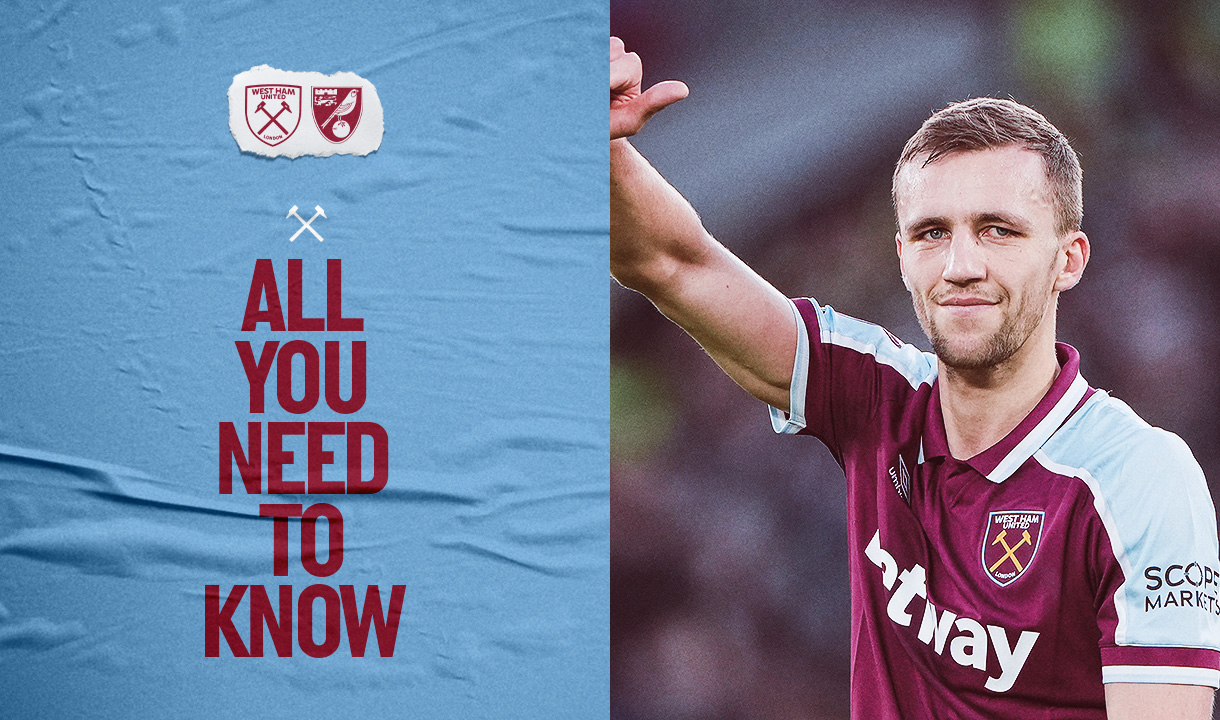 The Hammers and Canaries were originally scheduled to meet on Saturday 18 December, but the match was postponed at the request of the Norfolk club following a COVID outbreak.

David Moyes' side go into Wednesday's game on the back of consecutive Premier League victories at Watford (4-1) and Crystal Palace (3-2), results which pushed the Londoners back into the top five, and Sunday's 2-0 Emirates FA Cup third round win over Leeds United on home turf.

Newly-promoted Norwich, meanwhile, are bottom of the table after five consecutive defeats without scoring a goal. However, Dean Smith's team did score a morale-boosting 1-0 FA Cup third round win at EFL League One side Charlton Athletic at the weekend.

Tickets are available for Wednesday's visit of Norwich City via the Ticket Exchange. Click here to secure your seat now, or to list yours for resale if you are a Season Ticket Holder who can no longer be with us in-person.

Tickets are also on General Sale for our home Premier League fixture with Leeds United on Sunday 16 January now. Click here to be at London Stadium for that game.

Face coverings are now a legal requirement in all indoor areas, including on the concourses, except when eating and drinking or sat at a table. We would also strongly recommend wearing face coverings while seated in the stands. If you’re exempt from wearing a face covering you may wish to show a recognised exemption according to Government guidelines.

We would encourage supporters to arrive at least one hour before kick-off wherever possible, with all supporters aged 18 and over prepared to show a valid form of NHS COVID-19 certification ahead of entering the stadium on a matchday. Download and register with the NHS App to generate an NHS COVID Pass.

Wednesday's match will NOT be broadcast live on television in the UK. If you are based overseas, you might be able to watch the game in your territory. Click here for overseas broadcast listings.

With London Stadium set to play host to 60,000 fans for our latest exciting fixture of an exciting 2021/22 season, we have produced another 116-page issue crammed full of exclusive interviews and exciting content for fans of all ages.

David Moyes will definitely be without Kurt Zouma (hamstring tendon) and Angelo Ogbonna (knee), while Aaron Cresswell (back) has also been sidelined in recent weeks. However, the manager revealed Zouma's rehabilitation is going well in his pre-match press conference.

Saïd Benrahma is also unavailable as he is with the Algeria squad at the CAF Africa Cup of Nations.

Dean Smith will be without Scotland international midfielder Billy Gilmour, who has returned to Chelsea for treatment on an ankle injury.

It is now nearly 30 years since Norwich City mounted an unlikely title bid in the Premier League’s first-ever season, going eight points clear at the top of the table and eventually finishing third, before following that with an historic UEFA Cup victory over Bayern Munich.

The names Gunn, Culverhouse, Prior, Butterworth, Newman (Rob, now West Ham's Head of Recruitment), Bowen, Crook, Goss, Fox, Robins and Sutton will forever be part of Norwich City folklore, with many of them honoured at and still regular visitors to Carrow Road.

Those two seasons, just prior to the huge expansion of the Premier League into a worldwide force and the arrival of superstar players from across the globe, Norwich became not just the pride of Norfolk, but the darlings of English football.

In many ways, while Norwich are no longer challenging at the very top of the game, and have not competed in European football since, they remain a club which every supporter has a soft spot for.

Owned by celebrity chef Delia Smith – a television star in the 1970s and 1980s – and her husband Michael Wynn-Jones – a writer and publisher who has supported the club since the 1950s – Norwich City, in some ways, remain a throwback to the days before football became what it is today.

While other promoted clubs have mortgaged their futures by throwing more money than they can seemingly afford at trying to stay in the Premier League, Smith and Wynn-Jones’ Norwich have taken a more pragmatic approach, partly out of necessity, but also because they simply do not want to put their 119-year-old football club at risk.

The result has been Norwich, who spent all but three seasons between 1982 and 1995 in the top-flight, becoming English football’s modern-day yo-yo club.

In each of their last four visits to the Premier League, the Yellows have stayed for just a single season before being relegated back to the second tier and, bar an improvement in results in the second half of the current campaign, that unwanted streak will extend to five.

In an attempt to avoid history repeating itself, Smith and Wynn-Jones replaced Daniel Farke with former Aston Villa boss Dean Smith in November.

Smith guided Norwich to victory over Southampton and draws with Wolverhampton Wanderers and Newcastle United in his first three games in charge, but zero points and zero goals scored in five Premier League games since have seen the Canaries swoop back down to the bottom of the table.

With only three points (plus a sizeable goal difference) between themselves and safety, Norwich still have a chance to save themselves in the second half of the season.

If they do stay up, the achievement will likely be met with similar enthusiasm to those who took the Premier League and UEFA Cup by storm three decades ago.

West Ham United are unbeaten in eight home Premier League fixtures with Norwich City and have not been beaten by the Canaries in east London since going down 2-0 in the old First Division in March 1989.

The Hammers have won three and drawn two of the last five Premier League meetings between the two clubs, doing the double in 2019/20, with a 2-0 win at London Stadium being followed by a 4-0 victory at Carrow Road.

Michail Antonio scored all four goals in that latter victory on 11 July 2020, becoming the first West Ham player to score four goals in a single Premier League match in the process.

That result West Ham's widest margin of victory over Norwich in the competition. The Canaries' biggest Premier League win over the Hammers was a 3-1 success in Norfolk on 9 November 2013.

The 39-year-old has taken charge of six West Ham United fixtures previously – a 1-0 home win over Coventry City in the Championship in January 2012, a 3-0 Carabao Cup third round win over Bolton Wanderers in September 2017, a 2-0 Premier League defeat at AFC Bournemouth in January 2019, a 5-1 EFL Cup third round win over Hull City last September, the 2-2 Premier League draw with Brighton & Hove Albion at London Stadium in late December 2020 and the 3-0 home win over Sheffield United last February.