Voting open for Hammer of the Year

West Ham United are delighted to announce that voting is now open for the annual Player Awards brought to you by Betway in aid of the Academy.

The 2021/22 season has been one to remember, as David Moyes' men have challenged around the top end of the Premier League table for the second campaign in succession, while mounting a run deep into the UEFA Europa League knockout stages.

And now it is your turn to honour the stars of one of the most successful campaigns in the Hammers’ recent history.

Vote for your Betway Hammer of the Year now!

Will Tomáš Souček retain his crown? Could Declan Rice lift the prize for a second time? Could Jarrod Bowen’s goals carry him to the Award? Or will another player get your vote?

Vote now to make sure you have your say and select your Betway Hammer of the Year!

And you could be there to see our winner get crowned on Monday 9 May at the 5-star JW Marriott Grosvenor House on London’s Park Lane. The event will climax with the crowning of the Hammer of the Year, although this year’s event also represents the perfect opportunity to say farewell to Mr West Ham, Mark Noble, at his final event as a West Ham player.

Join the West Ham United first-team squad and Hammers legends of yesteryear at our exclusive end of season awards evening, where together we will honour the achievements from the 2021/22 campaign, the Academy of Football and our rich heritage.

Places for this incredible evening include a three-course meal, exclusive gift, entertainment and the chance to hear from West Ham heroes, past and present. Tickets are available now, priced from £3,100+VAT for a table of ten, or £325+VAT for individual places.

To book your places or to explore sponsorship opportunities, call the Club London team now on 0204 551 0037. 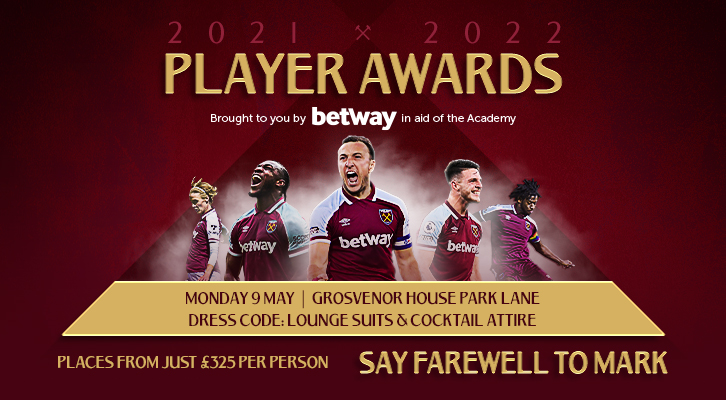