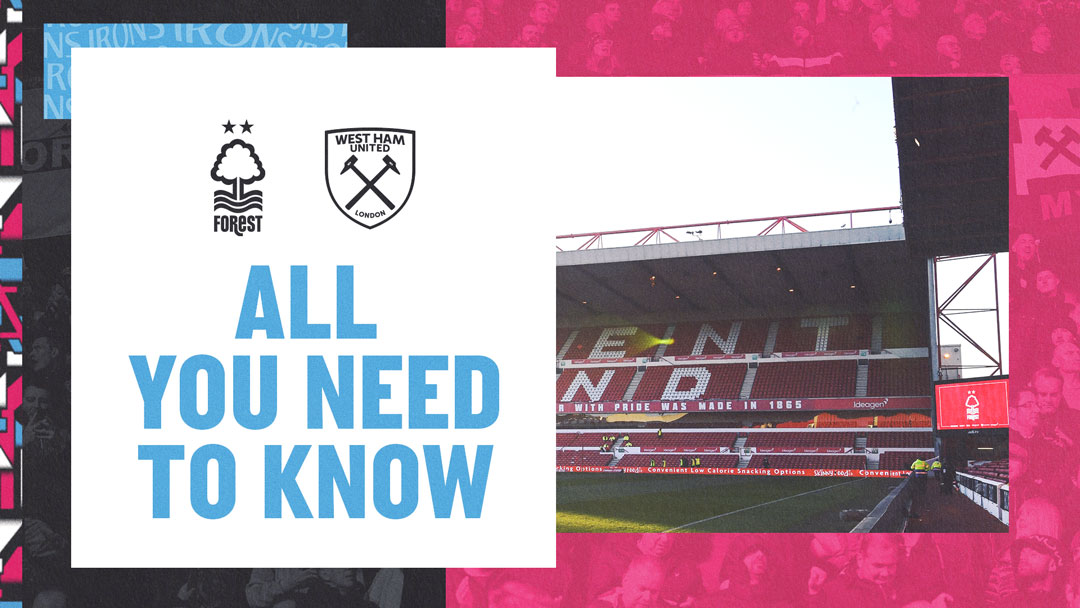 West Ham United will contest a Premier League fixture at the City Ground for the first time in nearly 24 years on Sunday.

Nottingham Forest’s promotion means the Hammers will travel to the home of legendary heroic outlaw Robin Hood hoping to put an end to the merriment the Reds and their supporters have been enjoying since winning the EFL Championship Play-Off final in May.

A lot of water has flowed down the River Trent since that last top-flight meeting at the City Ground in September 1998. Nottingham Forest have suffered two relegations, won two promotions and gone through no fewer than 20 permanent managers, along with almost as many caretakers, since Dave Bassett’s departure in January 1999.

The current incumbent, Steve Cooper, has been by far the most successful, winning 27 of his 46 matches in all competitions at time of writing and guiding Forest from the roots of the Championship to (almost) the top of the tree, with a fourth-place finish followed by a Wembley win over Huddersfield Town.

Now, after 24 seasons away, Cooper’s job is to prevent the Tricky Trees from falling down a division again immediately.

Sunday's match will be broadcast live in the UK by Sky Sports and across the world by the Premier League's international broadcast partners. You can also listen to live commentary in the UK on BBC Radio 5 Live.

The address for your sat nav is City Ground, Nottingham, NG2 5FJ. However, there is not much by way of street parking to be had in the streets around the stadium.

From the south, that means you’ll leave the M1 at Junction 24 and follow the signs for Nottingham and then for football traffic.

There are a number of car parks within a mile of the City Ground, including those at Meadow Lane (Notts County’s home ground), Nottingham railway station, County Hall, the Cattle Market, Lady Bay Sports Ground and Victoria Embankment.

For those travelling by train, Nottingham is on the East Midlands Railway line from London St Pancras.

West Ham United fans will be situated in the lower tier of the Bridgford Stand.

Recent signings Gianluca Scamacca and Maxwel Cornet could make their first West Ham United starts, with the latter set for his Hammers debut following his transfer from Burnley

Centre-backs Craig Dawson and Angelo Ogbonna are edging closer to fitness, while goalkeeper Łukasz Fabiański and forward Michail Antonio both took knocks in last weekend's defeat to Manchester City and will hope to feature at the City Ground.

David Moyes will definitely be without summer signing Nayef Aguerd, who suffered an ankle injury in the pre-season match at Rangers and has been ruled out for an extended period.

Nottingham Forest are back in the Premier League after a 24-year absence, having won promotion via an EFL Championship Play-Off final victory over Huddersfield Town at Wembley at the end of May.

Formed way back in 1865, Forest won the FA Cup in 1898 and 1959 before enjoying a golden era under the management of Brian Clough.

During 18 years as manager between 1975-93, Clough led Forest to two European Cups, the First Division title for the one and only time in 1978 and no fewer than four Football League Cups, as well as an FA Charity Shield and two Full Members Cups.

In the 23 years since dropping out of the Premier League, Forest have been owned by Nottinghamshire-born businessman Nigel Doughty, the Kuwaiti Al-Hasawai family and, since 2017, Greek businessman Evangelos Marinakis.

The club has employed a succession of managers before appointing Steve Cooper in September 2021 and the Welshman guided the Tricky Trees back to the Premier League at the first attempt.

Our most recent visit was instantly forgettable – a 5-0 FA Cup third-round defeat in January 2014 – but our last league game at the City Ground was more memorable.

Having been relegated the previous season, Sam Allardyce’s Hammers defeated Nottingham Forest 4-1 in the Championship in August 2011, with current first-team coach Kevin Nolan and Academy coach Carlton Cole among the scorers. That result remains our biggest-ever win at the City Ground.

Our most-recent Premier League victory at the City Ground was in September 1996, when Mark Bowen and Michael Hughes got the goals in a 2-1 success.

The Merseyside-born official was promoted to the Select Group 1 list of referees in the summer of 2020.

This will be his fifth West Ham United appointment in total and third in the Premier League.

Previously, Jones took charge of the 1-0 Premier League win over Fulham at London Stadium in November 2020 and 4-0 victory at Norwich City in May 2022, as well as the EFL Cup third-round defeat at Oxford United in September 2019 and FA Cup fourth-round win over Doncaster Rovers at London Stadium in January 2021.