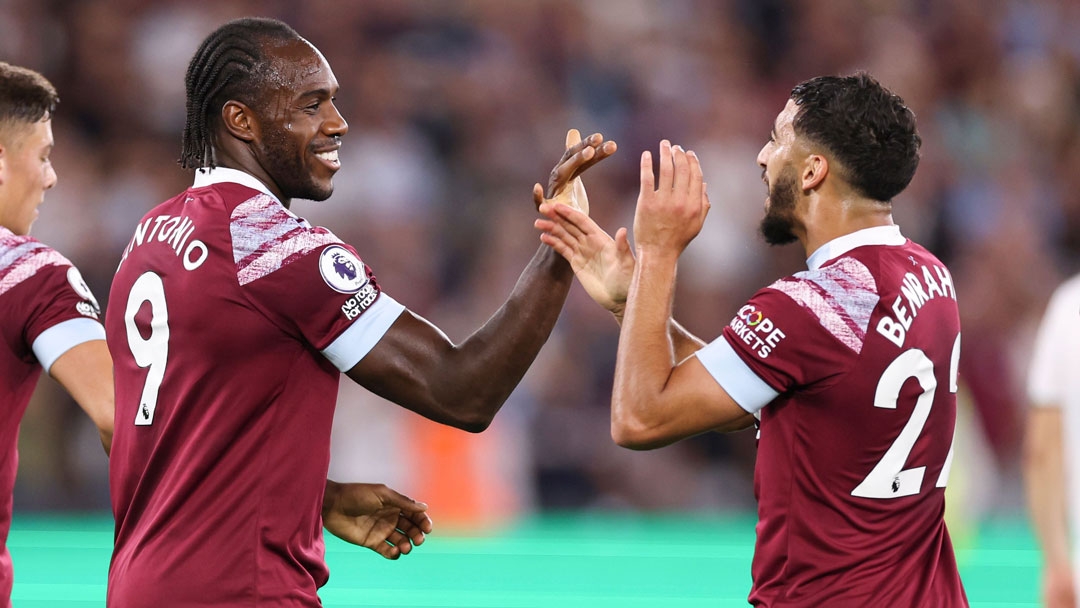 FPL: It is time to transfer in Saïd Benrahma?

With the Gameweek 3 transfer deadline set for 11am on Saturday 20 August, time is running out to get Saïd Benrahma into your FPL squad!

Despite a frustrating 1-0 defeat away to Nottingham Forest last weekend, West Ham United fans could take plenty of positives from the performance of one particular man: Saïd Benrahma.

With his attacking threat evident throughout at the City Ground, Benrahma too caught the attention of FPL bosses who know he could become a key differential in future Gameweeks.

The No22 followed that with a virtuoso performance off the bench in Thursday's UEFA Europa Conference League win over Viborg FF, when his strong run set up fellow substitute Michail Antonio for teh Hammers' third goal in a 3-1 success.

Such was the impact of his showings that Benrahma might just be able to help you close the gap on current West Ham United FPL league leader James Davenport, whose team 'Bowen Arrow' has already hit 184 points in just two Gameweeks. Not a bad start at all.

If you missed the first couple of weeks of FPL fear not though. Even now, it is not too late to join the Hammers' FPL league by clicking here and using the code jiymp8

Remember that throughout the season here on whufc.com and in each issue of the Official Programme, we’ll be picking out players to watch – and giving some pointers on how to top your leagues!

This week, it is all about Benrahma. So, let's get started...

Benrahma scored a goal and assisted in both of the first two games of the 2021/22 season, before he became a regular feature in a West Ham side that finished seventh last term.

In May, he recorded 16 FPL points against Norwich City, scoring two goals, earning three bonus points, and one extra for maintaining a clean sheet at Carrow Road. All in all, it was a decent day at the office for Benrahma – and those with him in their FPL side!

And, as a result, Benrahma almost doubled his points haul last season from his first year at the Hammers, proving that the Algerian international has found his form in east London.

So, what can Benrahma offer in the next few weeks?

Firstly, a bargain. Purchasing Benrahma would be a cheap way to acquire a Hammers' attacker. Currently, he is priced at just £6 million, while his ownership sits at a mere 2%.

In the coming weeks, Benrahma has the potential to score a hatful of FPL points, as the Hammers face Brighton and Hove Albion and Tottenham Hotspur at the London Stadium, either side of a trip to Steven Gerrard's Aston Villa.

In Gameweek 2, his goal against Forest was ruled out for a foul by Michail Antonio in the buildup. He was also vital in the move that led to the disallowed goal, skipping through the Forest defence with ease to lead a quick counter-attack.

Yet, most importantly, he is also a set-piece taker. His quality from dead-ball situations was evident against Steve Cooper’s men when he later hit the bar with a magnificent curling effort.

There is also the possibility of assist bonuses too. After a neat run down the left, Benrahma picked out Pablo Fornals, whose shot hit the woodwork from distance. He also played a key role in the move that fashioned West Ham's penalty in the second half - he passed the ball to Tomáš Souček, before an effort struck Forest defender Scott McKenna's arm.

On another day, Benrahma's FPL points haul would have been huge. Don't say we didn't warn you!

Could Benrahma prove to be a potential penalty taker?

FPL bosses know the value that a penalty taker can bring to a larger points hauls, and Benrahma could be just that.

After Declan Rice missed from the spot against Forest last time out, Benrahma might have the chance to step up from 12 yards in the future, although Manuel Lanzini has taken penalties in recent months in Mark Noble’s absence.

Throughout his career, the Algerian has had a pretty decent record from the spot. Impressively, he is yet to miss.

While Benrahma also famously scored the winning penalty to clinch West Ham's victory over Manchester City in the Carabao Cup round of 16 in 2021/22.

And, should the Hammers decide to give him a chance from the spot, we could expect some extra points!

Free Hit or Wildcard? How do you get Benrahma in your team?

Yet, the option to play two chips is also available. If you play the Free Hit, you will be able to make an unlimited number of transfers. With the Free Hit, however, your lineup will return to how it was at the beginning of the previous week. As a result, Benrahma would only play one Gameweek should you transfer him in this way.