Nikola Vlašić was pleased to play his part in a thoroughly professional 2-0 win over Dinamo Zagreb in the UEFA Europa League on Thursday night.

The Hammers’ new No11 made his first West Ham United start upon his return to his native Croatia, playing at a ground – the Maksimir Stadium – on which he had previously appeared five times his national team.

Interchanging effectively with Pablo Fornals and Manuel Lanzini in a supporting triumvirate behind Michail Antonio, the attacker was a positive influence on and off the ball as he looked to build up rapport with his new teammates.

And while Vlašić ultimately departed the game with 20 minutes still left on the clock, he did so leaving his new side in a commanding position, having established dominance of the game earlier on.

“It was a really nice victory,” Vlašić reflected. “It finished 2-0 but I think it could have been even more.

“We are very satisfied with this victory. It was really important to open our Europa League season with a win.

“I think each game it will get better, but I think today was a very important victory and we succeeded.” 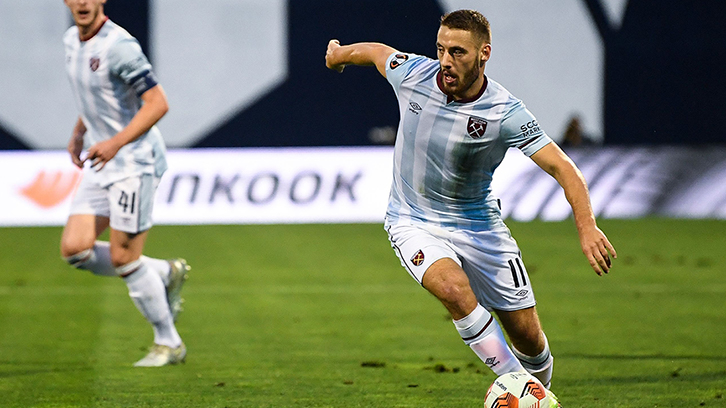 Having featured a further seven times previously at Maksimir Stadium for Dinamo’s greatest rival, Hajduk Split, Vlašić was well aware of the quality and European pedigree the Hammers’ hosts possessed prior to kick-off.

Those aspects only served to make West Ham's dominance of the game an all-the-more impressive feat.

We expect that, in every competition, we’ll try to be very good, and we will try to win every game

Now, with one win already under their belt in Group H, Vlašić feels his team have a platform on which to build the confidence needed to go further in the Europa League this season.

“Dinamo Zagreb are a very good team,” he explained, “but I think we didn’t let them play their style of play and we were the better team.

“We expect that, in every competition, we’ll try to be very good, and we will try to win every game. We’ll take it step by step and competition by competition.”