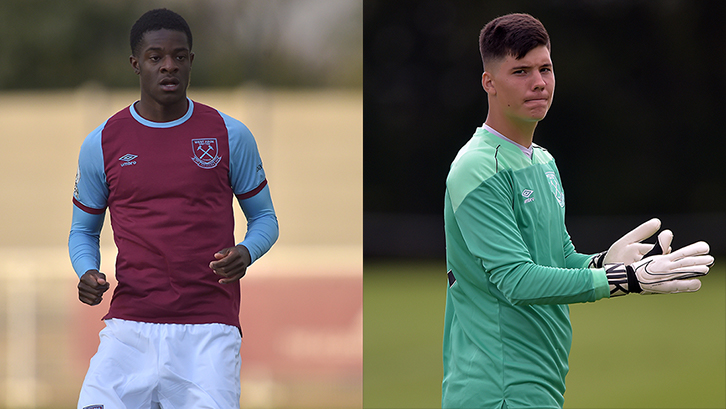 Academy of Football starlets Mipo Odubeko and Krisztian Hegyi have been shortlisted for the Under-23 Goal of the Season and Under-18 Save of the Season prizes respectively at the Premier League’s 2020/21 Academy Awards.

Odubeko’s nominated strike was an exquisite curling finish to draw the Hammers level against former club Manchester United in the 3-2 Premier League 2 win at Leigh Sports Village in April.

Just moments after halving his side’s two-goal deficit, the forward did superbly to bring down Conor Coventry’s lofted pass, cut inside the defender and produce an effort of real venom to find the far corner.

Odubeko would later complete his hat-trick in injury time, one of two match-winning performances which contributed to his winning the Premier League 2 Player of the Month award.

Odubeko's nominated goal is the second in the video below.

A 𝙢𝙖𝙨𝙨𝙞𝙫𝙚 3-2 win for our U23s over Manchester United U23s last night... pic.twitter.com/WsktwgJy20

It was a save made all the more impressive for the razor-sharp reflexes it required, with Hegyi initially unsighted by the presence of covering defender Levi Laing.

Watch Hegyi's nominated save on YouTube here (save takes place at 1:29:30).

Club coaches were invited to nominate the best goals and saves by their players throughout the season, with the shortlist then narrowed down by the Premier League Football Development panel.

Academy staff will vote on the winners at the Premier League’s 2020/21 Academy Awards on Wednesday evening, with the results announced later that night.