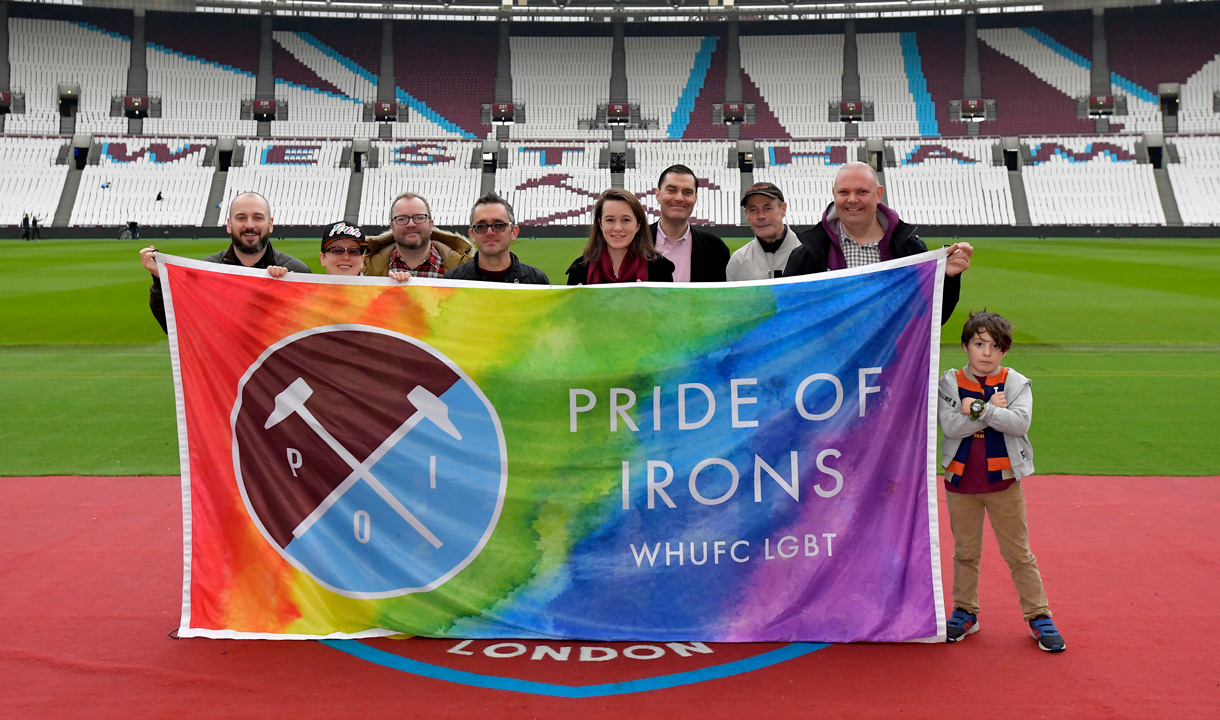 As part Rainbow Laces Day, which falls on 8 December, and of the Premier League’s own Rainbow Laces week, during which all 20 clubs worked together showcase the fight against discrimination and intolerance, West Ham United took part in a series of events, both virtual and in-person, to further illustrate the Club’s support for our LGBT+ fans, players and coaches.

One of those events saw Club captain Noble enjoy a video call with the Hammers’ LGBT+ supporters’ group Pride of Irons, speaking to co-chair Jim Dolan and member Brandi Edwards about how the game has changed for the better and sharing his own experiences of how gay men have been warmly and rightly accepted by the first-team squad in his time at the Club.

JD & BE: Mark, we’re celebrating Rainbow Laces week at Wednesday’s game with Brighton & Hove Albion at London Stadium, and it’s great that West Ham United is such an inclusive environment for the LGBT+ community…

MN: “I think West Ham is known as a family club and we accept everyone, whatever your skin colour, whether you have a disability or how you are as a person.

“In our changing room, we’ve got to show that anyone is included. Especially over the last five years, I’d say that’s definitely come to the forefront.

“The young boy who came out in Australia (Adelaide United’s Josh Cavallo, who became the first top-flight player to come out as in August 2021), I think that was a massive step, when you saw the support he got. I hope that shows you that players and supporters can be free to express themselves and if they are gay, they can come out and can say it, and that’s what we encourage.

“It’s a shame Tom (Thomas Hitzlsperger, who spent the 2010/11 season with West Ham before coming out in 2014 following his retirement from the game. He is now the sporting director of German club VfB Stuttgart) didn’t feel he could come out while he was playing the game. I played with him and maybe if it was now, maybe he’d feel he could do so because the football world and the world in general is more accepting.”

Can you understand why players are still hesitant to come out? What would you say to a gay player who was thinking about it, but holding back?

“In general, I think if you hold stuff back, as we’ve seen during COVID with the issues around mental health, if people keep stuff in and keep their feelings inside, letting things out is a weight of your shoulders, and I think that’s the same for everyone.

“Do you know what? I think the world has changed in such a way now that you’re going to see a lot more [players coming out].”

As you mentioned, Thomas Hitzlsperger played for West Ham, and you also worked alongside Hugo Scheckter, who was the Club’s first-team Head of Player Care for three years and previously worked at Southampton…

“We were lucky enough to have someone work with us for a few seasons, Hugo, who was fantastic. He was gay and we knew he was gay in a changing room full of 25 fellas and it wasn’t a problem and was never a problem.

“It was incredible the way he went about it himself. When he first joined, he made us speak about it freely and it wasn’t an issue and made us all feel comfortable. Exactly that.

“It opened my eyes a bit, to be honest and we’re friends now and we still text. If someone is hiding being gay and worried about coming out, they should probably speak to someone like Hugo because he made it so clear.

“We had a long chat and when we became closer he was telling me about when he came to telling people he was gay and I think he is so comfortable now and he’s comfortable in football, which is even more incredible, but he has so much respect from players because he is so good at his job here that whether he was gay or straight, black or white didn’t matter. Because he did his job well, everyone respected him, and that’s the way it should be.”