David Moyes: The noise and performance were incredible

David Moyes had high praise both for his West Ham United team and the Claret and Blue Army after the Hammers swept to a 4-1 victory over Leicester City on Monday night.

West Ham were in rampant form to overwhelm the Foxes on a special night in east London, when 60,000 Hammers returned to a full London Stadium for the first time in 18 months.

It was a special atmosphere to mark a special occasion, and the team more than rose to it, as Michail Antonio’s double broke the Club’s all-time Premier League goalscoring record, and Pablo Fornals and Saïd Benrahma also hit the target to take the Hammers to the top of the early table.

It all added up to a great night for the boss…

We’ve got to keep calm, but it’s incredible with the noise you can hear and it’s 40 minutes after the game now, but you can still hear people singing outside. It gives you an idea of what it meant to them.

I managed other teams at Upton Park and I remember the nights there and how noisy it was. Tonight, I thought it was right up there – it was a great atmosphere.

I’ve got to say, I think the players deserve it. The performances last year merited good backing no matter what happened and the fans probably saw a new team in the flesh tonight. You might find it hard to get a ticket for this place now in the coming months, that’s for sure. 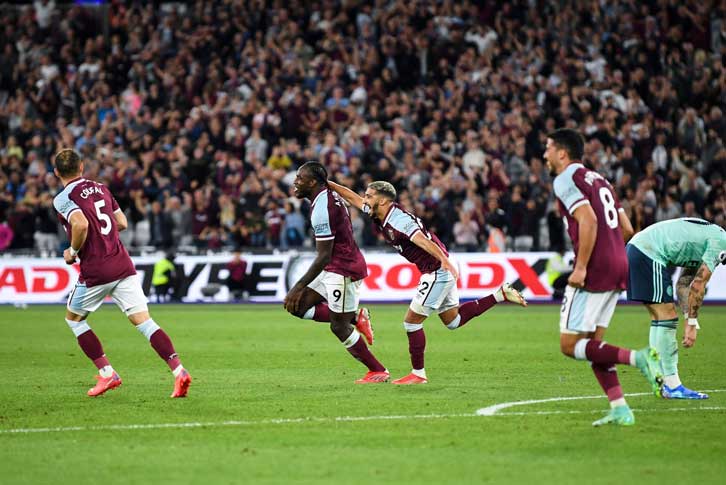 The red card did play a part in the game, because it was tight until then. We had got a goal in front, but the game was still very tight and I think Pérez was really unlucky with the tackle.

I think the tackle was a sending-off in the end but I don’t think he meant to do it. That’s part of football.

We scored some great goals. We put some lovely crosses in, and Mick had a header which Schmeichel made a great save from in the second half, so we played some really good football.

I enjoyed it, it was exciting for myself and it felt like a really big game tonight. Leicester won the FA Cup last year, they’ve just won the Community Shield, finished above us and just missed out on the Champions League.

I’m delighted for Michail to break the Club‘s Premier League goalscoring record, and especially pleased with how he refocused on his performance after the first half…

I’m really glad that he refocused and that’s I said to him that’s how you shut your manager up at half-time because he had made a couple of poor decisions with the ball, but in the end his goals were great and his performance in the second half was fabulous.

It’s only two games and the start, but let’s enjoy the performances and results we’ve had…

It’s only the start, I’d love to say it was more than that, but last year we lost the first two games of the season and people were talking about it in a negative fashion.

So why shouldn’t we talk about this in a positive fashion because we’ve won two?