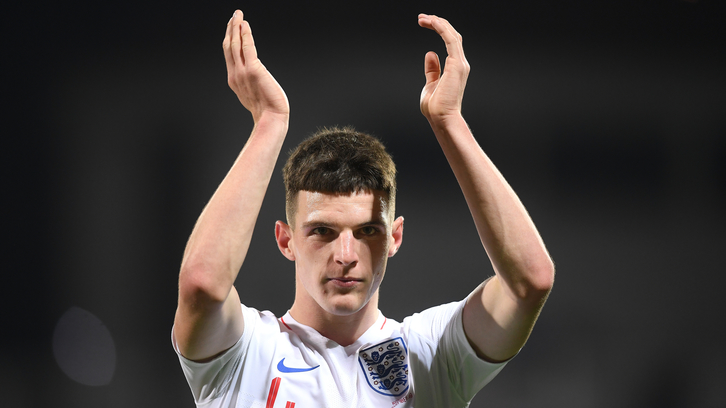 Two West Ham United players were in international action on Sunday afternoon, continuing what has been a busy weekend for Hammers representing their respective nations.

Declan Rice and Andriy Yarmolenko featured in UEFA 2020 European Championship qualifying fixtures, with both England and Ukraine rounding off their qualifying campaigns away from home.

Declan Rice started and played the full 90 minutes at the heart of the England midfield as Gareth Southgate’s side ran-out comfortable 4-0 winners in Kosovo.

Rice put in an assured display and was involved in the build-up of two of the England strikes.

The Three Lions took the lead though Harry Winks after half an hour, a slick passing move started by the West Ham holding midfielder was rounded off by Winks, giving England a deserved lead.

The away side controlled the game throughout and were able to add a further three strikes as time waned.

First Harry Kane met a deflected Raheem Sterling cross and slid the ball under the advancing Muric in the Kosovo goal.

Marcus Rashford was the next England forward to get his name on the scoresheet; the Manchester United player finished smartly after more positive play in midfield from Raheem Sterling.

Mason Mount added a fourth in injury time as England put the finishing touches on a fantastic qualifying campaign. In just eight fixtures Southgate’s team have hit 37 goals and head to the championships next summer in fine form.

Elsewhere, Andriy Yarmolenko was handed a start in UEFA Euro 2020 qualifying action for Ukraine, as they drew 2-2 with Serbia in Belgrade.

The Hammers No7 completed the full 90 minutes in the stalemate, assisting an injury-time equaliser for Artem Besiedin.

Prior to Sunday, Ukraine had already confirmed their status as Group B winners, but it was the visitors who took the lead in the opening ten minutes. Former Southampton midfielder Dusan Tadic was on hand to open the scoring from the penalty spot.

Ukraine however were deservedly back level before the break, Roman Varemchuck headed in from close-range after some neat play down the right flank.

Shortly after the restart Ukraine found themselves behind again, Dusan Tadic combined well with Alexander Mitrovic and the Fulham forward was able to bundle home to put Serbia into the lead for the second time.

With mere seconds left Yarmolenko’s side were able to find an equaliser. The Irons winger picked up the ball on the edge of the box, drove past his marker and fired a cross into Besiedin who made no mistake with an emphatic driven finish.

Arthur Masuaku, Gonçalo Cardoso, Albian Ajeti and Josh Cullen are all in action for their respective nations tomorrow and you can keep up to date on their progress at www.whufc.com