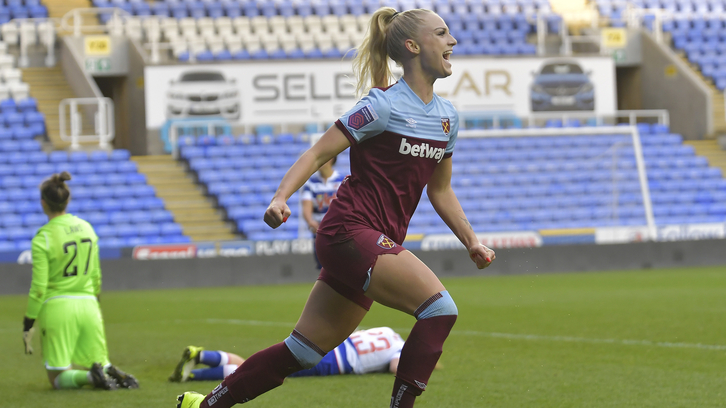 Alisha Lehmann’s cool finish after a brilliant West Ham United passing move was the all-important difference as the Irons claimed a huge 1-0 victory away to Reading in the FA Women’s Continental League Cup.

The No7 secured her fourth goal in three outings against the Royals with just 15 minutes left to play at the Madejski Stadium, turning home from Leanne Kiernan’s cross to send the points back to east London with the Irons.

Lehmann could have opened the scoring in the first half with a beautiful strike from distance, which struck the cross-bar, while the Swiss international also saw a low effort go wide in the second period.

The home side saw their own chances limited, with Anna Moorhouse comfortable in the sticks, as the Hammers secured their first three points in the Continental League Cup this campaign.

Head coach Matt Beard had the unenviable task of setting up his side without captain Gilly Flaherty and leading scorer Martha Thomas, with both unavailable for Sunday’s game. The Irons lined-up with a 3-4-3 formation, with usual midfielder – and captain for the match – Kate Longhurst slotting into defence along with Brooke Hendrix and Laura Vetterlein.

It took just 11 minutes for West Ham to go close. Lehmann fired a thunderous effort on goal from just over 20 yards which rattled the cross-bar.

The Hammers’ pressure was paying off, forcing Reading into errors. One such mistake almost played Adriana Leon through one-on-one, but the resulting pass to Jacynta Galabadaarachchi meant too much time had passed.

Reading saw their efforts limited, with Fara Williams’ long-range strike comfortably saved by Moorhouse, while Katharina Baunach’s lifted shot was also over the Royals’ cross-bar. Heading in at the interval, it was certainly the away side who were happier of the two teams.

West Ham could have been behind four minutes after the start of the second-half, as Amalie Eikeland stole possession and had time in the box. The Reading forward opted to try the chip, but her effort was claimed by Moorhouse.

Galabadaarachchi was next to try her luck after Cho So-hyun’s flicked header. The youngster turned inside on the left and curled a shot into Rachel Laws’ hands.

Brooke Hendrix, having been outstanding last weekend against Chelsea, was once again throwing her body on the line for the Claret and Blue shirt, making a series of crucial blocks before a counter-attack fell to Leon. The Canadian played in Lehmann, who could only turn her low shot agonisingly wide.

There was no chance of Lehmann missing seven minutes later though. Tessel Middag’s flicked header was inch perfect, finding fellow substitute Kiernan. The No8 raced through on goal, squaring the ball to Lehmann, who only had to stab home to put the Irons into a deserved lead.

While a delay for injury led to seven additional minutes, the away side were able to hold on and claim a deserved and valuable three points in their Continental League Cup campaign.