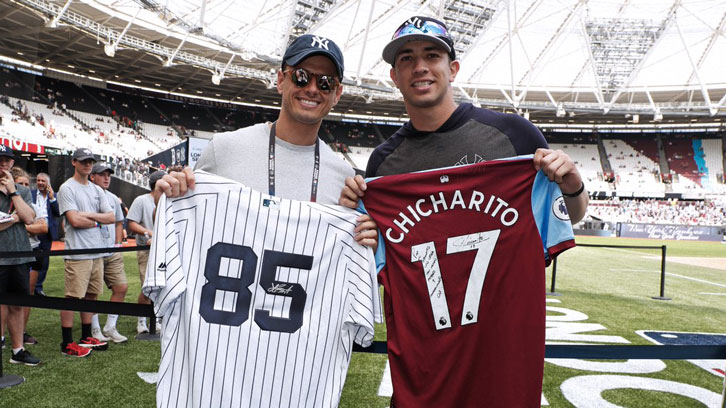 The West Ham United striker was among 60,000 fans who turned out to watch the Yankees and Red Sox clash on Sunday in the second of two historic London Series ballgames – the first regular-season MLB matches to be played in Europe.

Ahead of his return to pre-season training on Monday, Chicharito was invited to the game as a guest of Yankees pitcher and his fellow Mexican Luis Cessa and was welcomed to the field for Yankees batting practice.

There, the Yankees fan swapped shirts with Cessa and met his Venezuelan teammate Gleyber Torres, who was clearly excited to rub shoulders with the Irons’ No17 and Mexico’s all-time leading goalscorer.

“Chicharito told me that he is a Yankees fan and super happy and very grateful with the invitation to the game,” said Cessa, who pitched four scoreless innings in relief after starter Stephen Tarpley gave up three home runs to the Red Sox in the first. “He is a tremendous person.”

Great to meet ya, Chicha 🤝 pic.twitter.com/Nau5dYgJ6R

Chicharito was joined in a second straight capacity crowd by fans from all over the world, including nearly 10,000 Yankees and Red Sox season ticket holders who crossed the Atlantic, and tens of thousands of British and European baseball supporters, including many Hammers.

Previously, the Yankees prevailed 17-13 in a wild first game on a hot and humid Saturday evening which lasted four hours and 42 minutes – just three minutes short of the MLB record for a nine-inning game – and saw All-Stars Aaron Judge and Jackie Bradley Jr among five players to hit home runs.

Among those in attendance were the Duke and Duchess of Sussex, who met both teams before the game, including the Duchess’s distant relative, Red Sox outfielder and reigning American League Most Valuable Player Mookie Betts.

It was the second high-profile meeting for Betts during his visit to east London, as the prolific hitter was presented with a West Ham home shirt by former Hammer Carlton Cole at Friday’s workout day.

After Saturday’s fireworks, both on the field and those launched from the stadium roof at the game’s conclusion, Sunday’s fixture was unsurprisingly lower in scoring, but nonetheless a thrilling occasion for everyone at London Stadium, including Chicharito!