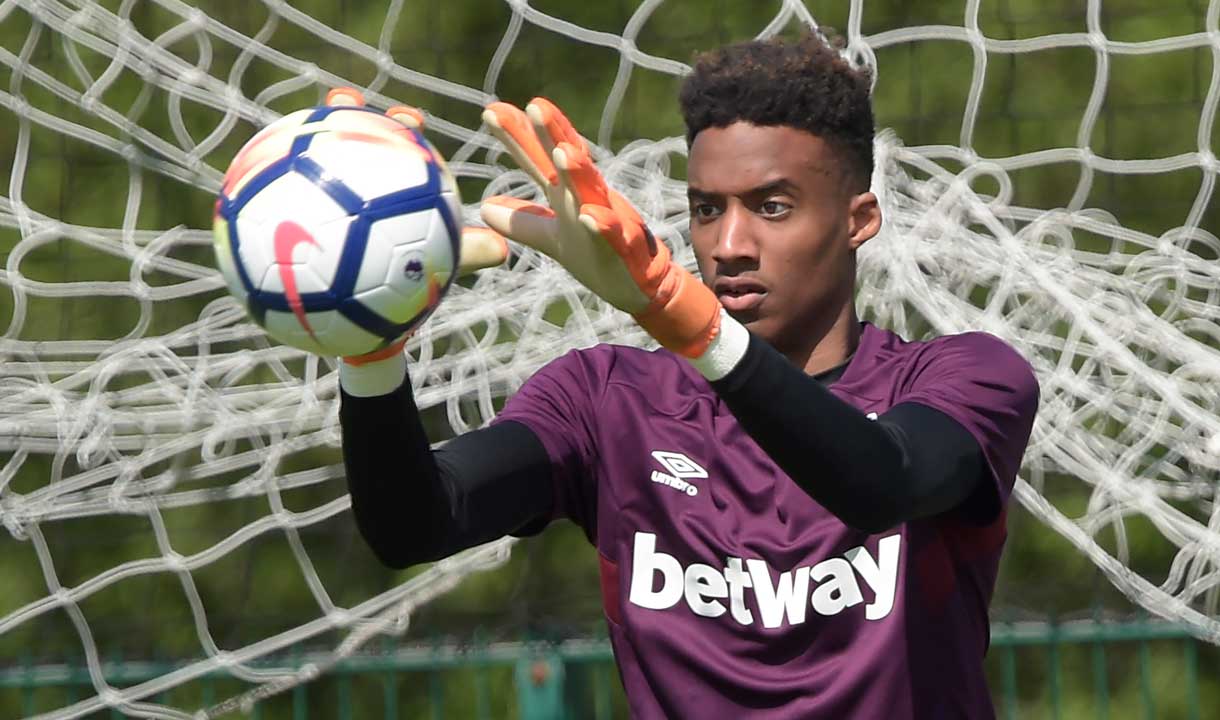 West Ham United goalkeeper Nathan Trott has joined EFL League One club AFC Wimbledon on loan until the end of the 2019/20 season.

The England U20 international will link up with former Hammers coach Wally Downes at the Cherry Red Records Stadium, where he will hope to make his senior debut and gain valuable first-team experience.

The 20-year-old stopper, who signed a new three-year contract in March and remains very much in West Ham’s long-term plans, has been a regular at Premier League 2 level since the age of 17 and is considered one of the country’s brightest goalkeeping prospects.

Goalkeeper coach Xavi Valero believes Trott’s move to the Dons will aid his development and is the next logical step towards West Ham’s first team.

“The situation in the first team affects the young goalkeepers and that is why it was important that we have three experienced goalkeepers ready and able to perform in the Premier League in the squad,” the Spaniard, who has seen the experienced Roberto and David Martin join the Club this summer, while Adrian will depart when his contract expires on 30 June.

“With Lukasz Fabianski being joined by Roberto and David, this will enable us to give Nathan the opportunity to go out on loan and get some valuable experience of playing first-team football, which we are happy about.

Nathan is one of the growing young talents in England and it is important we give him the platform to continue improving and developing his skills.

“With Nathan going out on loan, this will give Joseph Anang to play regularly for the Under-23s, while we also have some promising goalkeepers in the younger age-groups such as Daniel Jinadu and Krisztian Hegyi, who is only 16 and we consider to be one of the best young goalkeepers in Europe at the moment.

“My idea is that we need three first-team goalkeepers ready to perform, which in turn enables the young goalkeepers to concentrate on their development without the pressure of training, travelling and playing in lots and lots of matches, because it is not beneficial for young goalkeepers to have too busy a schedule.

“In my mind, the Club has some very good goalkeepers at all levels, with some great prospects for the future, so we are all happy with this situation.”

Trott himself is looking forward to his loan move and says he feels he has the firm backing of Valero, manager Manuel Pellegrini and the whole Club as he prepares to embark on his AFC Wimbledon adventure.

“[Manuel Pellegrini] has got a good relationship with the young players in the first team,” the Bermuda-born player said. “Me and him have spoken a number of times. He’s really encouraging. He tells you to be yourself and enjoy football, and just try not to think about it too much.

Everyone at West Ham United wishes Nathan every success during his loan spell.