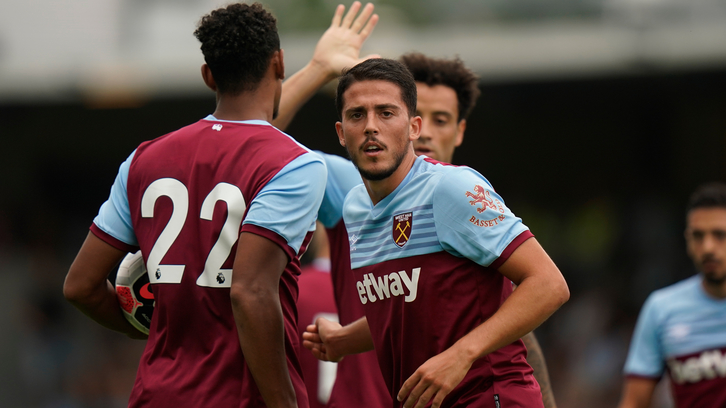 Pablo Fornals and Sebastien Haller each netted their first West Ham United goals as the Irons came from behind to beat Hertha Berlin 5-3 in a thrilling pre-season encounter.

The Hammers had to twice equalise in the first half, with the first coming from Fornals’ left-footed finish, before Manuel Lanzini powered home his second in two games just prior to the half an hour mark.

Hertha Berlin would take the lead for the third time seven minutes into the second period, but Haller would head home his first West Ham goal after Robert Snodgrass’ brilliant free-kick.

Grady Diangana received Carlos Sanchez’s pass to put West Ham in front for the first time on 78 minutes before Michail Antonio secured the win late on.

It was only four minutes into the game when Hertha Berlin took the lead. Pascal Kopke got the finish, putting the Irons on the back foot early.

To their credit, West Ham looked to bounce back immediately and found their way level just a few minutes later. It came in the form of summer signing Formals. Credit also goes to fellow new acquisition Sebastien Haller, who spotted the midfielder in a better position on the edge of the area and squared the ball. Fornals made no mistake, powering past Kraft and levelling the game.

Haller himself then went close, firing a strike across the face of goal which went wide.

Once again though, Hertha would take the lead. Davie Selke burst into the penalty area, held off the challenge from Declan Rice, and squeezed a shot past Roberto in the Irons goal for Hertha’s second.

Half an hour had not struck on the clock and we had our fourth goal of the game, and another West Ham equaliser. Again, Haller and Fornals combined well, playing with a partnership that looked years in the making. The Spaniard found Lanzini around 22 yards from goal, with the Argentinian powering home a left-footed strike in off the post.

West Ham, having been behind twice, may have taken the lead in the minutes before the half-time whistle. Haller saw a volley go just over the bar, while Aaron Cresswell’s free-kick was deflected away by a strong Hertha wall.

Having survived Hertha taking the lead twice in the first half, West Ham looked to take the initiative in the second, although the German team found the back of the net again seven minutes into the second period, only for it to be ruled out for offside.

Jack Wilshere skewed a header wide moments later, before Hertha took the lead once again. Kopke was again in the right place to turn home from just inside the penalty area, after Roberto had made a great save to deny Covic.

A thrilling game was levelled for a third time on 70 minutes, with record signing Haller getting the goal his efforts deserved. Substitute Robert Snodgrass whipped in a terrific cross from a free-kick, and the Frenchman turned a controlled header into the far corner of the net.

Having gone behind three times in the match, and come back three times, it was finally West Ham’s turn to take the lead on 78 minutes. Carlos Sanchez played a superb pass through to Diangana, who took the ball in his stride and confidently swept home West Ham’s fourth.

Andriy Yarmolenko set Snodgrass up for a shot from distance moments later, which was comfortably saved before Antonio secured the pre-season win with a powerful effort after some lovely linked play with Chicharito.