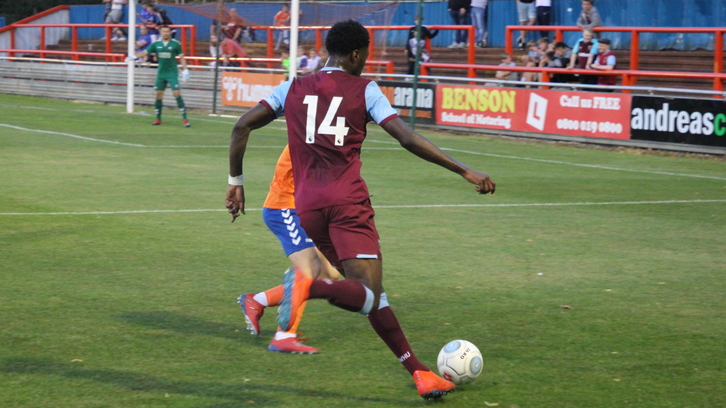 Adam Mills' first-half chip for the home side opened the scoring and West Ham had to wait until the 86th minute to get back on terms with their senior opposition.

Sean Adarkwa’s cool finish was no less than the Hammers deserved as they competed physically and created numerous chances throughout the game.

Braintree Town defended admirably but coach Steve Potts will be pleased with how the U23s performed in their first test of pre-season.

The first half began brightly for the Hammers with winger Dan Kemp stinging the palms of the Braintree Town ‘keeper within the first minute. Both sides were comfortable on the ball in the early exchanges and the central midfield partnership of Conor Coventry and Anthony Scully coped well with the physicality of the Braintree midfield.

T he Hammers had lots of success out wide in the opening period, Dju slid in Oladapo Afolayan and the striker’s shot was blocked by a great piece of last-ditch defending.

Despite West Ham having the majority of the possession in the first half, it was the home side who took the lead. Goalkeeper Joseph Anang miscued a clearance that fell to Braintree wide-man Adam Mills on the edge of the box. Mills made no mistake lifting the ball over the advancing goalie calmly, to send the home side in front in the 16th minute.

Potts will be pleased with how his side reacted to going a goal down. Both Scully and Dju forced good saves with efforts from range and lone striker Afoyalan looked a constant threat. Despite all the pressure, however, the young Hammers couldn’t get back level before the break.

Six changes were made by the West Ham United at half-time. Coach Potts looked to give his squad valuable minutes, before they fly to Slovakia on tour on Monday.

The second half saw West Ham again have success in the wide areas. Substitute Manny Longelo showed his confidence as he skipped past the full-back but his strike failed to test the Braintree keeper.

By midway through the second period West Ham had replaced all of the starting eleven. Sub-striker Sean Adarkwa volleyed off the right post in what was the Hammers best opening of the game up to that point.

Moments later, Longelo also went close, blazing over from inside the box with a clear look at goal as the U23s kept the pressure on their National League South opponents.

With time running out in Essex the Irons drew level.  Adarkwa found himself with space inside of the box. He struck decisively low into the bottom right-hand corner to draw the U23s level in the 86th minute to set up a frantic finish.

Despite West Ham’s best efforts, a winner could not be found in the closing stages, with the match ended in a draw.