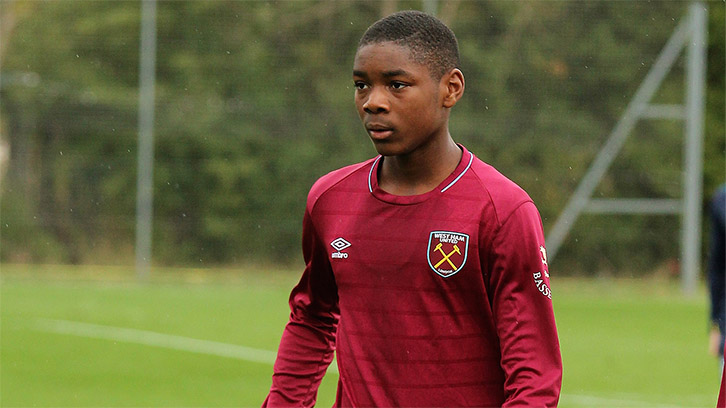 Seven of West Ham United’s Academy talents have been called up to England youth international squads for matches taking place this week.

Four of the Hammers’ brightest prospects have been selected to represent their country at U15 level, while three will travel to St. George’s Park to be part of the U16 squad.

The U15s, who face Belgium on Wednesday, have a Hammers contingent of Jacob Knightbridge, Junior Robinson and Divin Mubama to select from, as well as Sonny Perkins, who recently joined the Club when he made the switch from Leyton Orient.

Meanwhile, Jamal Baptiste (pictured above) and Jayden Fevrier, both of whom are playing above their age-group regularly for the Hammers in the U18s, are part of the U16 Three Lions selection, as is Amadou Diallo, who turns 16 this week. The winger has been so impressive for the U23s when called upon to play at that level this campaign.

Academy Director Terry Westley praised the youngsters for working hard to receive their call-ups, as well as the staff who have helped the young players achieve the opportunity to play for their country.

He said: “It’s great recognition for the players and the whole Club to have seven of our young players selected for two England squads. These lads have been working hard and playing great football all season and every one of them deserves the recognition.

“The staff who have been working in the Academy all season also deserve great credit; the coaching staff, recruitment and welfare – everyone needs to be congratulated. Without the people working across the Club, the players wouldn’t have the chance to go and have these experiences.

“International football provides our players with challenges and hurdles that perhaps they won’t experience just playing for their club, so I’m sure every one of them will return to the club after the training camps better for it and ready to work hard once again at Chadwell Heath.”