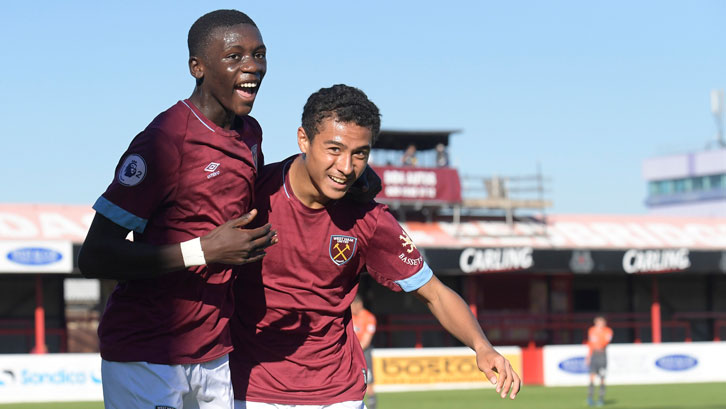 Jack Collison is hoping to have some experienced heads to call upon when his West Ham United team take on Manchester City in U18 Premier League Cup Group E.

The Hammers are without a Premier League 2 fixture this weekend, meaning the second-year scholars who have formed part of the U23 side in recent weeks will be available for youth-team duty.

The likes of Sean Adarkwa, Emmanuel Longelo and Dan Chesters have all featured for the U23s, while forward Bernardo Rosa and midfielder Kristijan Belic – both second years – are back in contention after recovering from injuries.

Their availability will boost a young Irons squad which goes into Saturday’s game at Little Heath on a six-match losing run in league and cup, and in need of a victory over Gareth Taylor’s City to keep them in with a chance of progressing to the knockout stages.

If you add in that experience around the younger players who have done very well, then all off a sudden we look a different prospect

“There is no Under-23 game this weekend, so it might give us the opportunity to get one or two bodies back,” Collison confirmed. “Bernardo Rosa was in great form before he got injured and he’s been out for a while, but now he is available again.

“Kristijan Belic is also fit again and we should get one or two of the other boys back who have been featuring for the Under-23s, so we’ll have a bit more experience about us.

“If you add in that experience around the younger players who have done very well, then all off a sudden we look a different prospect.

“It also creates competition for places and no-one can relax. Everyone has to push one another in training as nobody is assured their place in the starting eleven, or even on the bench.”

While the Hammers were beaten 3-0 at Blackburn Rovers in their first Group E fixture, Manchester City arrive in east London on the back of a victory over Leicester City by the same scoreline in their own U18 Premier League Cup opener.

“It’s a game we’re looking forward to,” coach Collison confirmed. “We know Manchester City are a good side full of quality and very similar to their first team in how they approach the game of football, so we’re really looking forward to it after the recent tricky run we’ve been on.”

Kick-off at Little Heath on Saturday is at 11am, with admission and parking both free of charge.