Lanzini thanks West Ham fans for support this season

Two-goal hero Manuel Lanzini has thanked the West Ham United fans for their incredible support throughout the 2017/18 season.

Lanzini scored two excellent goals for the Hammers in Sunday’s finale, taking his tally to five in the Premier League for the campaign, as the Irons saw off Everton 3-1 at London Stadium.

The Argentinian expertly tucked home from the edge of the area with his left foot in the first half to put West Ham ahead, before curling home an exquisite finish to secure the three points for the Irons.

I always say that the West Ham fans are amazing...I want to say thank you to them.

The 25-year-old was given a standing ovation by West Ham supporters when he was substituted in the second period, and Lanzini has personally expressed his gratitude to the fans for their continued encouragement.

“I always say that the West Ham fans are amazing,” Lanzini told WHUTV. “All season they have followed us at every Stadium and for this has been really good for us. I want to say thank you to them.

“I am really happy because we’ve finished like this. We deserve this. It was a long season – sometimes good and sometimes not good – but we finished good. This is good for us and good for the people, for all of us.”

Lanzini’s two goals saw the midfielder named the Betway Man of the Match in Sunday’s finale, but the South American has praised the quality of the passes into him for the goals, with Cheikhou Kouyate setting him up for the first finish. 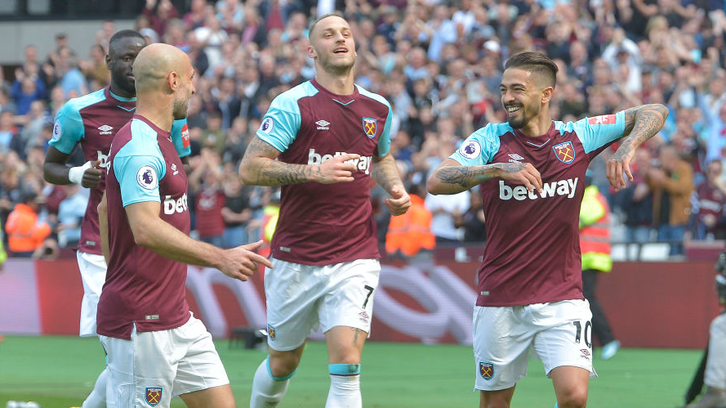 Lanzini added: “I think the finishes were good because the passes to me were good, and then I tried to do what I could with them.”

The No10 has also offered praise for manager David Moyes. The Scotsman joined the Hammers in November, with the Club in the relegation zone, and has guided the team to a 13th placed finish and 42 points, with the Irons collecting seven points in their last three matches.

“He’s a good coach and a good person. He’s done a good job and we will stay in the Premier League, and that’s down to his good work. But first he’s a good person as well.”