Noble: I couldn't have hit it any sweeter!

Mark Noble was brimming with pride after leading West Ham United to a vital 2-0 Premier League victory at Leicester City.

The Hammers were under huge pressure when they kicked off at the King Power Stadium on Saturday, but an outstanding all-round performance and a fine goal in each half from Joao Mario and Noble himself secured three important points.

The final score could have been even emphatic against a lethargic Leicester, with Marko Arnautovic hitting the underside of the crossbar and both Manuel Lanzini and Pablo Zabaleta going close during a dominant first-half display.

West Ham’s win means they are all but mathematically safe – if Southampton fail to win at Everton in the evening kick-off, it will be confirmed – and Noble is determined to finish a challenging 2017/18 season on a high.

“After the last two results (4-1 defeats by Arsenal and Manchester City), to come here against a good Leicester team is tough, but we played really free with the ball, and we probably should have been clear – we had three really good chances and Marko hit the bar,” the skipper observed.

It lined up nicely, and I just thought I’d have a go, and to be honest I couldn’t have hit it any sweeter!

The standout moment on a warm and sunny afternoon came midway through the second half, when Joao Mario’s free-kick was headed out by Aleksandar Dragovic and dropped to Noble 25 yards from goal.

Rather than control the ball or lob it back into the penalty area, he instead lashed arguably the best strike of his illustrious career into the bottom left-hand corner.

The goal sparked huge celebrations on the pitch and in the stands, where the 3,000-strong Claret and Blue Army were in full voice for the whole 90 minutes and beyond. 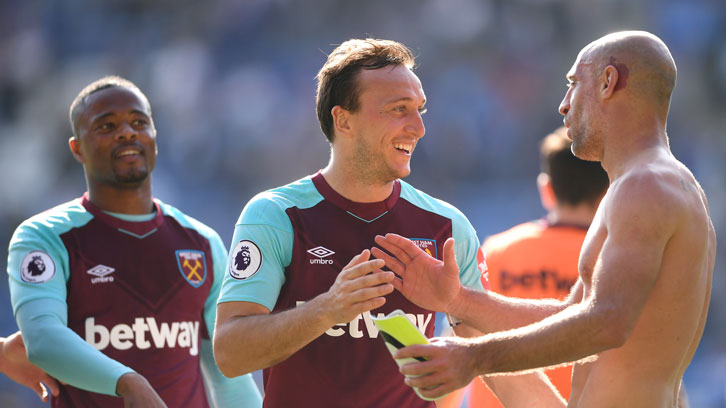 “With my goal, I don’t know what happened to be honest! They’ve dropped to me like that before and by the time you take a touch, the defenders are on you. So, it lined up nicely, and I just thought I’d have a go, and to be honest I couldn’t have hit it any sweeter! In front of the away fans as well; it was nice.”

West Ham can now likely look forward to their final two fixtures at home to Manchester United and Everton, and Noble is hoping the Hammers can reward the Claret and Blue Army with similarly positive performances at London Stadium.

“I hope on Thursday against United that we can perform like we did today. I know it will be a tough game but why not try and finish as high up the table as we can?

“We have two home games now. Where we are in the league, the fans will come and hopefully we can make that stadium a real good atmosphere for the last two games and finish off the season well.”