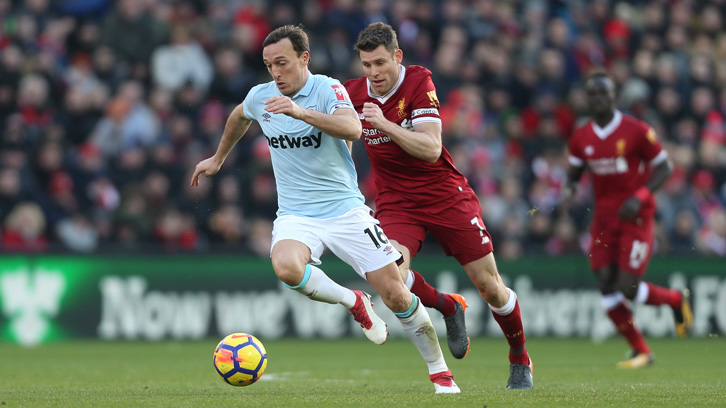 Mark Noble is relishing the opportunity to kick-off the 2018/19 Premier League season at Anfield.

The West Ham United captain will lead his team out to face Liverpool on the weekend of Saturday 11 August at the start of his 15th season in Claret and Blue.

Still just 31, the Hammers’ all-time record Premier League appearance-maker says his 319th top-flight game is likely to be another memorable one.

“Playing at Anfield is always special and everyone always looks forward to the opening game of the new season, so it should be a really good occasion for everyone,” said Noble, who scored in West Ham’s 3-0 Premier League win at Liverpool in August 2015 – the Hammers’ first win at Anfield in 52 years.

“Liverpool away is always a tough game and they’ll be keen to get their season off to a winning start, particularly as it’ll be their first home match since the Champions League final, but we will also want to make a positive start, so we’ll give everything and hopefully we will put in a good performance.

“We’ll be playing under Manuel Pellegrini for the first time, so all the lads will want to do their best and show the new manager what they can do. For me, Liverpool away is a really exciting game to start the season.”

We’ll be playing under Manuel Pellegrini for the first time, so all the lads will want to do their best and show the new manager what they can do

Noble led the team out that historic afternoon, which ended in a 1-0 home win, and is hoping for a repeat of that result when the Cherries return to east London.

“It’s no secret that home form is vital for every team’s success and it’s no different for us,” he continued.

“Our results at London Stadium were good during the second half of last season and we want to pick up where we left off when we play against Bournemouth.

“We know it won’t be an easy game, as they never are against Eddie Howe’s team, but we will have a capacity crowd behind us and we’ll be confident of taking the three points. See you there!”