Zabaleta: We want to be safe as soon as possible 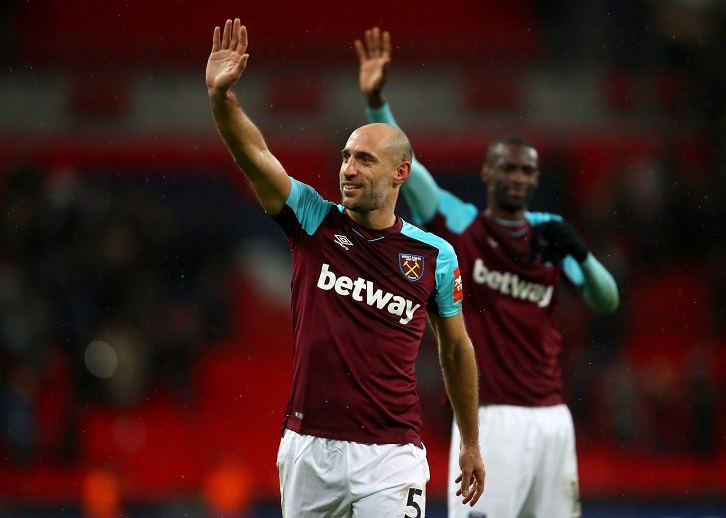 Pablo Zabaleta would love to be playing in the Emirates FA Cup fifth round, but the experienced full-back says West Ham United will use their free weekend to rest, recover and recharge for Premier League run-in.

The Hammers have lost just twice in their last 12 top-flight matches to climb from 19th on 3 December to their current position of 12th, but they remain just four points above the relegation zone with eleven games left to play.

Zabaleta, who has started all eleven of those matches and played all but 129 minutes of West Ham 27 Premier League games this season, says he and his teammates cannot afford to relax until their top-flight future is mathematically assured.

“We want to be safe as soon as possible,” he confirmed. “If you look at the season, we’ve had so many ups and downs and to be good enough to look up and fight for European qualification or something like that, you need more consistent to give yourselves that chance.

“The reality is we are only four points above the relegation zone, so we need four or five more wins to be safe. It’s not going to be easy.

“I’d rather be playing on Saturday as that would mean we’re still in the FA Cup, but we’ve got so many players coming back from injury and a free weekend will give the manager an extra week to recover them for the next game against Liverpool.

“We need the whole squad because everyone is important and we need to give our best to the team in the big games we have coming up.”

Two players who will be vital to West Ham’s chances of scoring just their second win at Anfield since 1964 will be Marko Arnautovic and Chicharito, both of whom scored in Saturday’s 2-0 win over Watford.

Zabaleta says the forward pair deserve praise for putting their respective difficult personal periods behind them to show their best form in Claret and Blue.

The Austrian has led the line with power and commitment, scoring seven goals and assisting three more in his last nine Premier League appearances, while the Mexican has netted three in his last four games since being recovering from a hamstring injury.

“We know Marko is an important player for our team, particularly with the way we play. He is powerful and makes those runs in behind. He’s a difficult player to play against.

“He gives us strength up front which you need when you’re playing with five at the back and three in midfield. You need someone who makes those runs and creates problems for defenders. Marko is this kind of player. He’s been really good without the ball as well.

“I have to say Chicharito is also important to us and both of them played a great game and I’m happy for them.

“There was a lot of speculation in January that he was looking to move clubs, but he has always been very professional, kept training well and was focused on what he was doing. At the end of the day, it was important for our team to keep him because he is important to us and we know what he can give the team. He proved again on Saturday that inside the box he is an important player.”