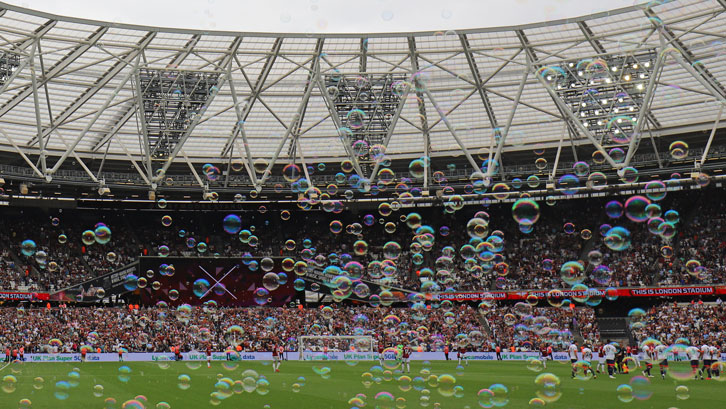 West Ham United is delighted to confirm that matchday capacity at London Stadium has now officially increased to 60,000, after the required safety certificate was granted and Half-Season Tickets have completely sold out.

Our opening Premier League fixture of 2019, against Brighton and Hove Albion on Wednesday 2 January, will see 3,000 more Hammers fans cheering on their team, which is set to mark a new record for the biggest home attendance and number of Season Ticket Holders in the Club’s history.

The increase in seats means that there are now additional tickets for our opening Premier League fixtures of 2019 against Brighton and Hove Albion, Arsenal and Liverpool, which are available to book now by clicking here.

Joint-Chairmen David Sullivan and David Gold said: “It is a wonderful feeling to know that more of our fans will be able to watch affordable Premier League football at London Stadium, and we look forward to the matchday atmosphere becoming even more magnificent in 2019. A big welcome to our new Season Ticket Holders and thank you to all of our loyal and patient supporters on the Season Ticket Waiting List.”

It took just a few days to work down the Club’s Waiting List which confirmed supporters appetite to secure their Season Ticket at such an exciting time for the Hammers, ensuring that Half Season Tickets were fully sold out upon confirmation of the safety certificate.

This means that London Stadium will now welcome a total of 54,000 Season Ticket Holders on a matchday, the highest in London, from the start of 2019.

Due to the demand, not all supporters on the Waiting List were offered the opportunity to secure a Half-Season Ticket, but being on the list remains the only way to have a chance of securing one for the 2019/20 campaign.

Our potential increase to a capacity of 66,000, with this first step at 60,000, means there has never been a better time to join the Season Ticket Waiting List! Click here to join the Waiting List for a deposit of only £10.

Tickets for the visit of Birmingham City in the Emirates FA Cup third round on Saturday 5 January, are also now on General Sale, available from just £10 for Adults and £1 for U16s. Click here to purchase.