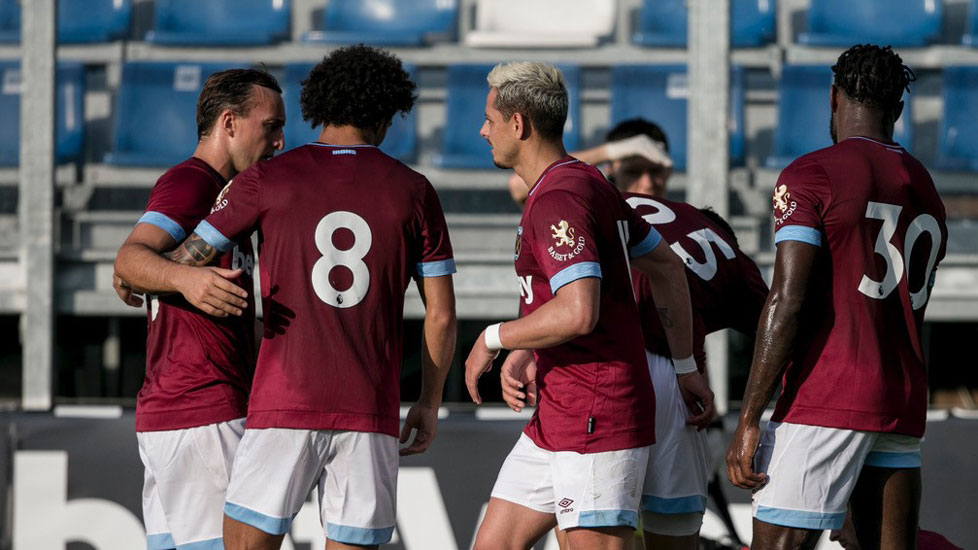 Chicharito marked his return to the West Ham United team with the winning goal in Friday’s 1-0 pre-season victory over Angers SCO in Austria.

The Hammers edged past their French Ligue 1 opponents with a goal from the Mexico star midway through the first half at the Das.Goldberg Stadion in Grodig.

Playing his first match since the FIFA World Cup Round of 16 defeat by Brazil, the striker showed his typical sharpness to get in front of his marker and divert Aaron Cresswell’s low cross into the top corner.

Manuel Pellegrini decided to use Friday’s match, which was played on a hot and humid evening with temperatures in excess of 80 degrees Fahrenheit, to experiment with a 4-4-2 formation, having used a 4-2-3-1 in West Ham’s five previous pre-season matches.

The new system nearly led to a goal within five minutes, with a neat build-up involving Marko Arnautovic and Chicharito ending with Felipe Anderson getting free inside the Angers penalty area, only for Mathieu Michel to smother his shot.

While Angers struggled to break down the West Ham defence, the Premier League side carried a great threat throughout.

On 20 minutes, Michail Antonio intercepted a pass and tested Michel with a low shot that the goalkeeper spilled and required captain Mateo Pavlovic to hack the ball clear of danger.

Three minutes later, West Ham were ahead courtesy of two players making their first appearances of the pre-season. Cresswell, back in action after recovering from a calf injury, crossed low and Chicharito nipped between two defenders to score.

Angers tried to hit back, but centre forward Wilfried Aka Kanga was twice flagged offside when well-placed. Then, with two minutes of the first half remaining, Lukasz Fabianski kept out Harrison Manzala’s rising shot at his near post.

Into the second half and Antonio should have doubled West Ham lead ten minutes after the break when he controlled Felipe Anderson’s free-kick before skying his shot over the crossbar from no more than ten yards out.

Arnautovic then tested Michel with a well-struck free-kick which the goalkeeper held safely at his near post, but it was Angers who finished the stronger of the two sides.

Algerian Farid El Melali was at the heart of the French side’s best moments, forcing Fabianski to tip his rasping shot over the crossbar before seeing another goal-bound shot bravely blocked by substitute Issa Diop.