Zabaleta full of praise for teammates Hart, Arnautovic and Chicharito

Pablo Zabaleta was full of praise for his old pal Joe Hart after the West Ham United goalkeeper produced a Man of the Match performance in Sunday’s 1-1 Premier League draw at Chelsea.

In recent years, Stamford Bridge has been a tough place for the Hammers to achieve a positive result and, going in 1-0 down at half-time, it seemed more of the same was to come, but a spirited second-half performance helped the visitors snatch a point.

While Chicharito grabbed West Ham’s goal, it was Hart whose series of fine saves set the foundation for his team to earn a share of the spoils – impressing the man who he has shared a dressing room with for much of the last decade.

“I feel Joe’s performance was fantastic,” said Zabaleta. “He made four great saves that helped us get a point.

“What we want is to have healthy competition between him and Adrian, as they have done great for the squad.

“I have known Joe for a very long time now and I think he’s a great lad. He deserves it as, even when he’s dropped, he still works hard and that shows why he’s a great professional.” 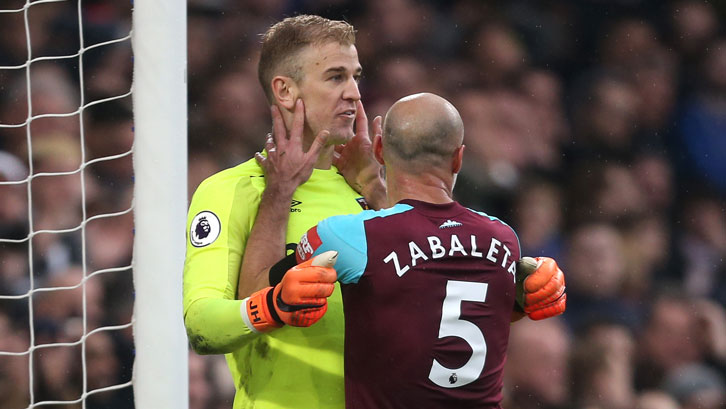 The experienced right-back, who was in solid form himself in west London, had warm words for those at the other end of the field as well, lauding the combination play of Marko Arnautovic and super sub Chicharito which for West Ham’s second-half equaliser.

“We knew at half-time that we were only 1-0 down and needed to keep working hard all together and to keep our discipline and when the chances came, we knew we had the players going forward who could score goals in Marko, Chicha and Joao Mario,” observed the No5. “They have huge quality to make the difference in the end and they have done it.”

“With them playing up front, they made it tough for the Chelsea defenders. It was a great goal with that cut-back from Marko and a great finish by Chicha.

“That was a great finish by Chicharito. He is a game-changer. He creates a chance and he scores. He’s always in the right position at the right time, we know that. It was a huge point of course, so now we just need to keep going as this is the best way to continue working.”