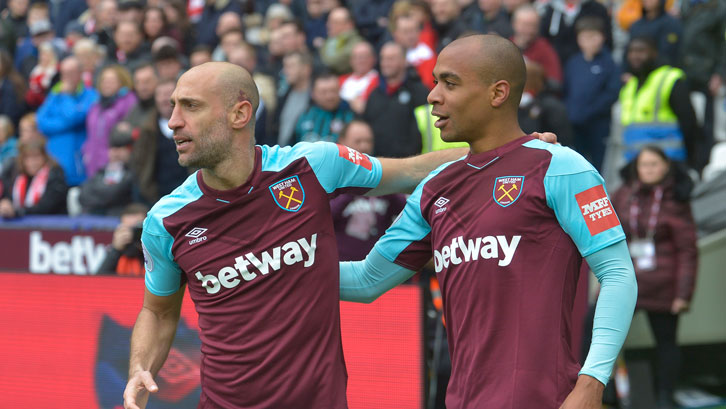 Pablo Zabaleta says Joao Mario can be an important figure for West Ham United during the Premier League run-in.

The Portuguese midfielder played an influential role in Saturday’s 3-0 win over Southampton at London Stadium, scoring a sensational opener before providing the cross which led to Marko Arnautovic to double the Hammers’ lead inside 20 minutes.

And Zabaleta says the UEFA Euro 2016 winner be vital to West Ham’s chances of ending the season strongly.

“Joao Mario showed his outstanding quality for us on Saturday,” said the Argentnian. “He has great technique and works hard for the team. On Saturday he played his best game for us so far and we were all happy for him.

“He took his goal really well and this his cross for Arnie was also fantastic. These moments are the difference in matches and Joao has the qualities to help us win more games, for sure.”

Joao Mario showed his outstanding quality for us on Saturday

Reflecting on Saturday’s victory in more depth, Zabaleta thanked the Claret and Blue Army for playing their part in defeating relegation rivals Southampton, and says the Hammers will strive to reach the same level in each of their remaining seven matches.

“I’m very pleased with our performance. I thought the whole team was outstanding on Saturday. It was a huge result for both teams because we were only two points above them and we needed those three points.

“I thought our first half performance was really good, then in the second half we were obviously trying to manage the game to keep the clean sheet. We also had a few more chances and could have scored from them. I’m very pleased with the victory as it was very important.

“When you score first, it gives you confidence for the rest of the game. I thought we were really good in the first half. We scored three great goals and we must say ‘Thank you’ to the fans because they were behind the team for the whole game.

“In football, at any level, you feel pressure. This is a great Club with a great tradition in English football and with great fans who are so demanding. This is something I really like from them and, let’s be honest, we’ve not been great and our performances have not been good in the last three games, so we needed that win for them and for everyone.

“It’s still so tight at the bottom of the table, so we need to keep picking up points to be safe as soon as possible. We want to take this Club forward and the only way to do that is to perform consistently and that’s what the fans expect from this team.

“It’s time to be all together now and we showed that unity on Saturday and I’m very pleased for that.”