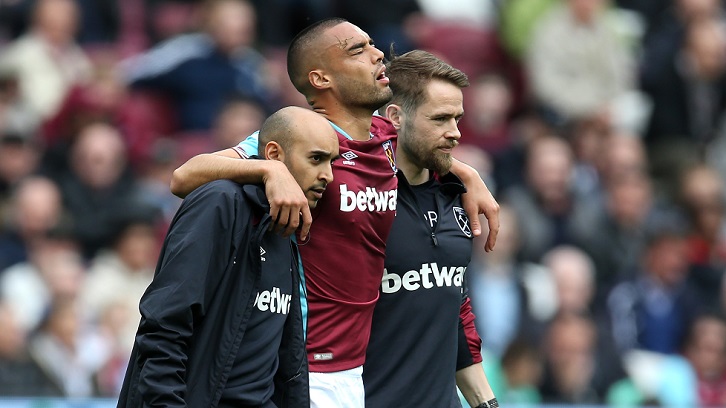 I would like to start by wishing all our international players the best as they represent their countries over the next few days.

Unfortunately, two of the players who had been called-up were unable to join as they suffered injuries in the Premier League game with Leicester City on Saturday.

Michail Antonio was withdrawn from the England squad because he suffered a muscle injury. He will be unavailable for the first team for three to four weeks.

Winston Reid was withdrawn from the New Zealand squad after he suffered a muscle injury early in the game. Winston will be out for five weeks.

Pedro Obiang suffered a nasty high ankle sprain injury while making a challenge during the second half. He underwent surgery in London on Tuesday evening and is now recovering at home.

Unfortunately, he will be unavailable for a significant period, and will be ready for next season’s preparation in July.

Domingos Quina has entered the second phase of his rehab and is now working on an individual basis in the gym.

Captain Mark Noble will resume training with the first team later this week and be available to face Hull City on 1 April.

Angelo Ogbonna is progressing well after his knee surgery in late January and, if his rehab remains on schedule, he will return to training with the first team in around four to five weeks.

Finally, we have Diafra Sakho, who returned to training with the Under-23s this week in controlled sessions, meaning that we tailor the sessions to manage his workload, gradually building him up. He has worked hard this week and will join the first team soon.

However, we must be mindful that Diaf is essentially at the start of his own personal pre-season training schedule.

When players return from their off-season, they will go through four to five weeks of pre-season work to build up their strength and fitness and, after undergoing back surgery and three months of rehab, a player needs time to reach sufficient fitness levels before we can contemplate making him available for selection in the Premier League.