Marko Arnautovic can’t wait to get started with West Ham

Marko Arnautovic cannot wait to get started with the Hammers as Slaven Bilic’s men get set for the second leg of their summer European Tour this week.

Arnautovic completed his Club-record move from Stoke City on Saturday and will link up with his new teammates when they depart for their training camp in Germany on Monday.

The 28-year-old forward played for Werder Bremen before heading to England with Stoke City four years ago, and in one of football’s little quirks, his Hammers debut could come up against Bremen with West Ham taking them on in a Betway Cup double header next weekend.

Looking in from the outside, Arnautovic has been impressed with the quality in West Ham’s squad and now he is itching to take his place in claret and blue.

He said: “The manager gives me a good feeling for the Club and for myself, that I can improve here. I didn’t have to think long to take this opportunity. 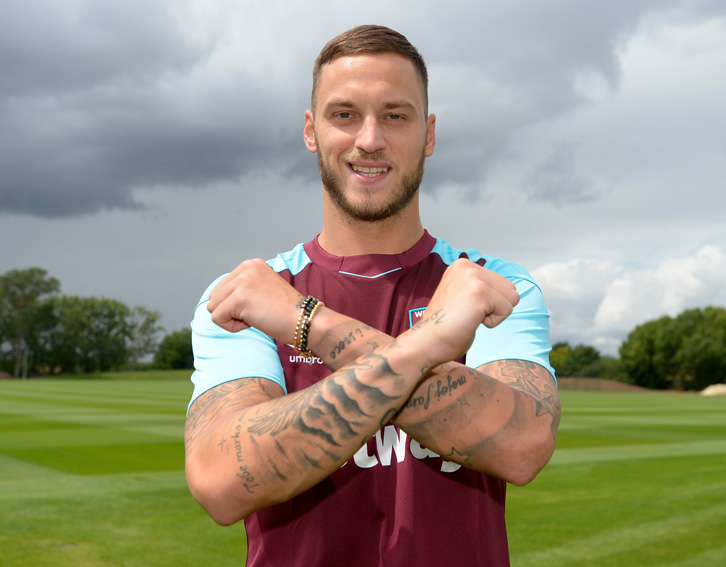 “I spoke also to my family and everyone – everyone was happy that the agreement was done with West Ham and now we can’t wait to get started at this Club.

“West Ham have a lot of quality players here. When you look at the squad, every player is one who is in that bracket. Now, Joe Hart and Zabaleta have come in as well. They have a lot of experience in the Premier League, they have played for Man City and are top players.

“I think we are going to make a good season, and I hope that everyone stays healthy, without injuries and we can show some good football.

“I will try to do my best here and I hope to celebrate some success [at West Ham].”

The manager gives me a good feeling for the Club and for myself, that I can improve here. I didn’t have to think long to take this opportunity

With three weeks to the start of the Premier League season, Arnautovic is already looking forward to walking out at London Stadium for the first time.

He added: “The first thing is that I’m happy to join the team on Monday and fly with them over to Germany. Then, it’s come like that that I’ll be playing against my former club first up, but the most important thing is to get to know the players better and the Club and try to settle as quickly as possible in the squad. Then everything will go from there.

“I’ve been in many stadiums, and many nice ones, but when I came to London Stadium to watch West Ham play Stoke, it was impressive. All the Bubbles, and all the fans cheering, it was a nice feeling. When you are a player at this Club and you play in front of 57,000 people every second weekend, it’s amazing.”