West Ham United Women had to work hard to book themselves in the fifth round draw of the Vitality Women’s FA Cup on Sunday afternoon – securing a 2-0 win over third tier side Wolverhampton Wanderers.

Dagný Brynjarsdóttir netted the first of the match on 70 minutes after they’d been made to work hard by a solid Wolves side.

Then Katie Johnson turned the ball into her own net six minutes later after Kate Longhurst had fired in a cross that she couldn’t clear away.

The home side, who were playing against WSL opposition for the first time and registered their biggest crowd in their history at New Bucks Head gave a good account of themselves, pushing the Hammers all the way.

It was almost a year to the day when Paul Konchesky managed the Hammers to victory over Sheffield United in last season’s FA Cup fourth round in the absence of Olli Harder, but this time this boss was doing it for the first time as the manager officially.

He elected to give starts to young midfielders Halle Houssein and Keira Flannery, whilst Lucy Parker also came into the starting XI for the first time since her injury back in October.

Longhurst, Izzy Atkinson and Lisa Evans were all back from the start after being on the bench in midweek for the 1-0 win over Liverpool – Abbey-Leigh Stringer, Honoka Hayashi, Brynjarsdottir, Risa Shimizu, Viviane Asseyi and Kirsty Smith all dropped to the bench for the clash in Shropshire.

The first fifteen minutes of the match were dominated by Konchesky’s side, with Flannery, Longhurst and Parker in particular combining well down the right-hand side as they looked for an opening.

The home side almost created the first opening of the contest when Beth Merrick capitalised on a mistake at the back and surged through on goal, but Hawa Cissoko, who was making her 50th appearance in Claret & Blue was able to come across and snuff out the danger.

The Hammers looked to respond, and when Emma Snerle found Atkinson with a great ball in behind, you could be forgiven for thinking that the net would bulge. However, Wolves ‘keeper Shan Turner made a solid save, and Lisa Evans couldn’t find the target with a follow-up.

But Wolves were up for this one, spurred on from the roar of the crowd behind them. Beth Merricks had been their main outlet for most of the first half, and with 21 minutes gone she delivered a wonderful ball into the box that was almost nodded home by Summer Holmes.

Flannery was running the show – the 17-year-old picked out a wonderful through ball for Evans, but the Scotland international was flagged offside.

But whilst the Hammers were dominating the play, they still couldn’t create a real, clear cut opportunity. Grace Fisk went close from the second phase of a corner kick, but again, it was easy for Turner to claim.

After the break, a corner from Snerle was attacked well by Lucy Parker, with her header being cleared off the line.

Atkinson was next to put in a good ball, this time into the path of Evans – but her flick towards goal was kept out by Turner.

The Wolves goalkeeper was definitely the busier of the two, denying Grace Fisk and Longhurst in a matter of minutes.

Konchesky would bring on Asseyi, Brynjarsdottir and Smith just after the hour mark, and it would be the Iceland international who would be the one to break the deadlock. A loose pass from the impressive Turner fell at the feet of Flannery. The youngster took her time and laid it on a plate for Brynjarsdottir, who made no mistake from close range to open the scoring.

And it would be two moments later when Johnson turned the ball into her own net after Longhurst had driven in a cross from the right.

That would be how it would finish in Shropshire, with Konchesky's side booking their place in Monday's (30 January) fifth round draw.

Want to come and watch the Hammers against Arsenal at Dagenham? Click on the graphic below to purchase your tickets! 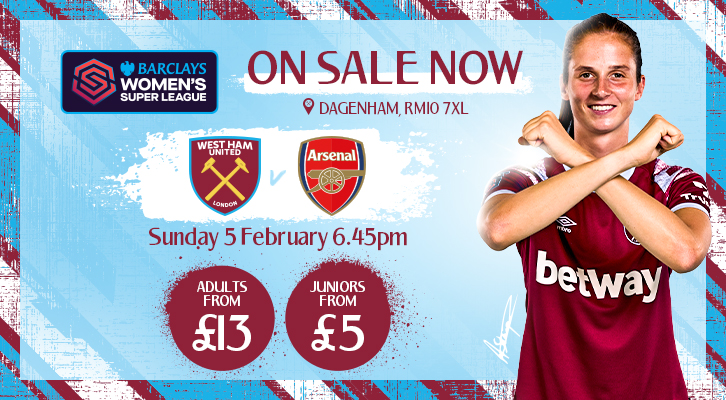