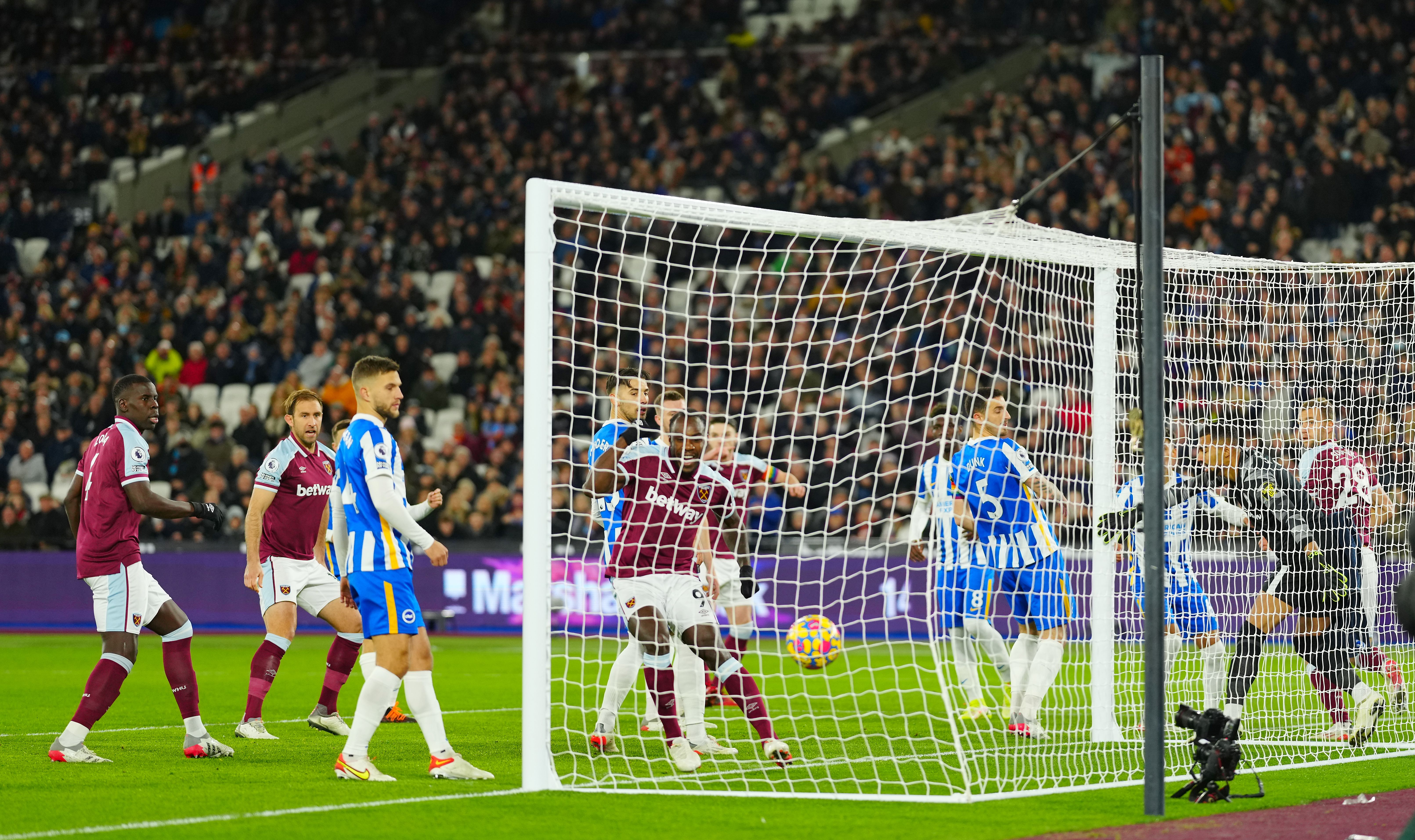 West Ham United drew 1-1 with Brighton at the London Stadium after Tomas Soucek’s early opener was cancelled out by a late overhead kick from Neal Maupay.

The ever-reliable Soucek, who scored an all-important equaliser when Brighton visited the London Stadium last season, headed the Irons ahead in the fifth minute.

But Maupay’s goal in the 89th minute sank Hammers’ hearts to deny them all three points and strengthen their hold on a place in the top four.

The Hammers extended their lead over fifth-place Arsenal, who now sit one point adrift ahead of their game against Manchester United on Thursday, but will rue the fact the gap is not now up to three.

As bogey teams go, no side has caused West Ham more headaches in the Premier League than Brighton: the Irons are still winless against the Seagulls since their promotion, losing three and drawing the last six after this 1-1 tie.

West Ham’s energy from the first whistle matched the Rainbow Laces light show, which preceded the game and re-emphasised the Irons’ support of inclusivity in football.

Soucek netted with a textbook header from a corner soon after, glancing in Pablo Fornals’ teasing corner to mark West Ham’s 1,200th goal in the Premier League.

Soucek's fellow countryman Vladimir Coufal returned to the side for his first Premier League start in over a month and almost doubled the lead in the tenth minute.

His shot from distance stunned the gloves of Brighton goalkeeper Robert Sanchez, who only just managed to get to the loose ball ahead of Jarrod Bowen and Michail Antonio.

Next up, Fornals was inches away from finding a second for West Ham 28 minutes in, rattling the underside of the crossbar with a well-timed volley after Antonio had headed Coufal's cross back to him.

It incited a spell of sustained pressure from the home team, who found no issue tearing through Brighton’s defence but a second goal elusive.

After losing Jeremy Sarmiento to a leg injury, another enforced substitution was imposed upon Seagulls manager Graham Potter in the 35th minute, when club record-signing Adam Webster was also replaced because of a lower-limb issue.

A superb save from Lukasz Fabianski four minutes later denied nis fellow countryman Jakub Moder, who had broken free of the home defence - only to have his effort hit the goalkeeper's body and bounce wide.

Two minutes after the interval, West Ham nearly struck again from a corner when Craig Dawson and Antonio worked in tandem to bundle the ball past a stranded Sanchez.

But, following a lengthy check from VAR official Jarred Gillett, the goal was ultimately disallowed for offside against Antonio, even though the ball appeared to hit a defender after bouncing off Dawson, which prompted a chorus of boos from the home supporters.

Bowen, who was one of West Ham’s livelier performers on the evening, then nearly added his third Premier League goal of the season in the 65th minute, but his right footed shot edged inches wide of the post.

Four minutes later, Brighton went just as close through Adam Lallana, but his effort curled away from Fabianski’s far post, much to the relief of the home fans.

David Moyes turned to Arthur Masuaku and Manuel Lanzini in the 76th minute as the Irons looked to seize back control of a game swinging in Brighton’s favour.

Sure enough, the pendulum swayed, and West Ham quickly mounted two probing attempts on Brighton’s goal, first an Antonio header and next a great long-range effort from skipper Rice, which forced a save from the Seagulls 'keeper.

The Hammers’ all-time record Premier League goal scorer looked hungry for more in the final stages, forcing yet another stop out of Sanchez in the 84th minute.

But – against the run of play – it was Brighton's No9, and not West Ham's, who found the net.

Maupay found enough room in the penalty area to direct an acrobatic volley beyond Fabianski, after substitute Tariq Lamptey had got down the right wing and swung over an inviting cross at head height.

West Ham were rocked but did not lose hope and harried once more to find a winner, but another good save from Sanchez to deny Bowen and a clearance off the line from Marc Cucurella to keep out Zouma's header gave Brighton enough to hang on for a share of the spoils.