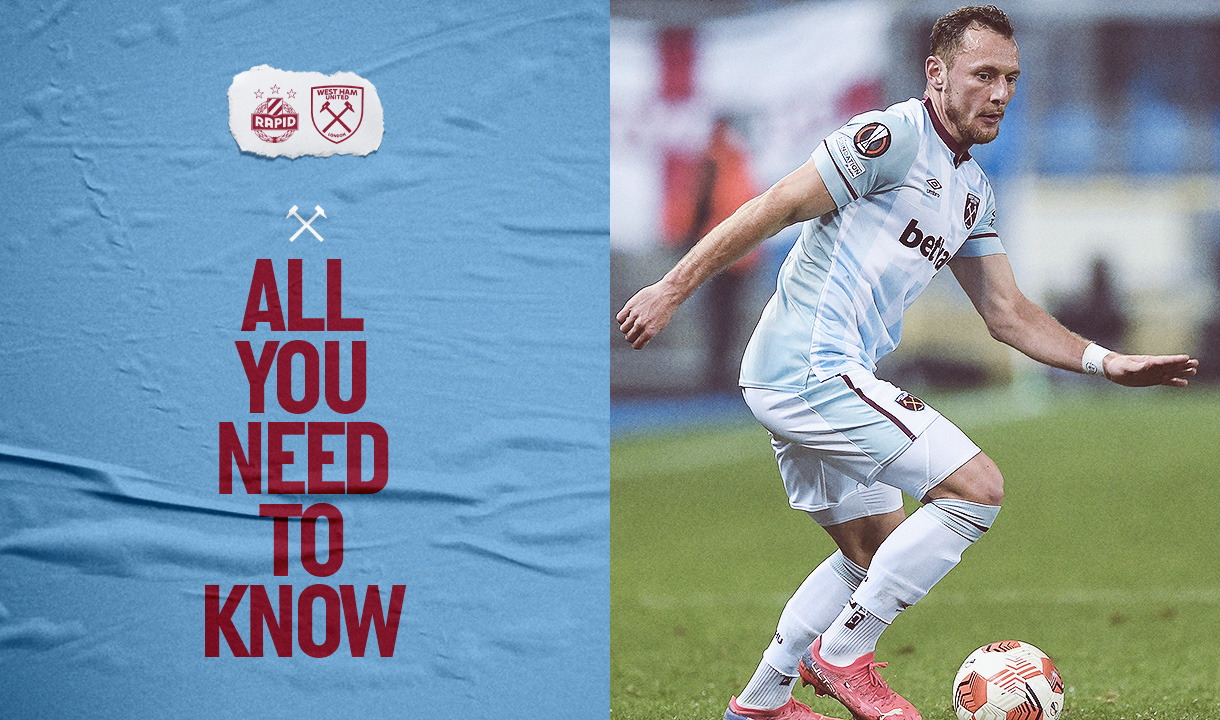 The tie will be played without supporters of either club present at the Allianz Stadion after Austria went into a national lockdown on Monday following a rise in COVID cases in the central European country.

While the circumstances will be out of the ordinary, the Hammers need a win to secure top spot and direct passage to the round of 16, having won three and drawn one of their opening four group-stage ties.

The Irons defeated Dinamo Zagreb (2-0), Rapid (2-0) and KRC Genk (3-0) in their opening three matches before drawing 2-2 at the latter to sit four points clear of the Croatians, six ahead of the Belgian Cup holders and seven ahead of their Austrian opponents, with two rounds remaining.

David Moyes’ side are guaranteed passage to the knockout rounds, but finishing first in Group H would avoid a play-off round tie with a team who had finished third in their UEFA Champions League group.

West Ham are seeking to kick-off a new unbeaten run after seeing their seven-match streak ended with a 1-0 Premier League defeat at Wolverhampton Wanderers on Saturday. That result also ended an eleven-match unbeaten run away from home in all competitions.

Meanwhile, it has been a difficult start to the season for Rapid, who replaced their manager Dietmar Kühbauer with former player and two-time Austrian Footballer of the Year Steffen Hofmann a fortnight ago after winning just four of their opening 14 Bundesliga fixtures and just one of four Europa League ties.

Rapid did win Hofmann’s first game in charge, 1-0 at home to SCR Altach in the Bundesliga, at the weekend.

Thursday’s kick-off is at 6.45pm CET, which is 5.45pm back in London. The game will be broadcast live in the UK on BT Sport. If you live overseas you might be able to watch the game live too, so please check local listings for coverage in your territory by clicking here.

David Moyes is again set to ring the changes to his starting XI in the UEFA Europa League, with Premier League matches at Manchester City and home to Brighton & Hove Albion and Chelsea to follow in the space of seven days from Sunday.

With those games in mind, the Scot could call upon the likes of Alphonse Areola, Vladimír Coufal, Issa Diop, Mark Noble, Manuel Lanzini, Nikola Vlašić and Andriy Yarmolenko.

Angelo Ogbonna is ruled out for the long-term after undergoing surgery to repair the injured cruciate ligaments in his right knee.

No club has won the country’s championship more times than Rapid’s 32, while the Green-Whites have won the Austrian Cup on 14 occasions.

Rapid have also reached two European finals and contested well over 200 matches in continental competition since thrashing PSV Eindhoven of the Netherlands in the European Cup first round back in 1955.

Rapid lived up to their name by winning Austria's first-ever national championship in 1911/12, then retained the title the following year.

The club continued to dominate during the inter-war period, winning a hat-trick of championships between 1919-21, including doubles courtesy of their first those 14 Austrian Cup triumphs in 1919 and 1920.

When Austria was annexed by Nazi Germany, Rapid responded by winning the German Cup in 1938 and Championship in 1941.

Into the post-war period and Rapid kept on winning, becoming Austria’s representatives in the first European Cup after winning their 19th League title in 1954/55.

Rapid’s early appearances in the new competition saw them achieve single-leg victories over AC Milan and the all-conquering Real Madrid, who needed a play-off to defeat the Austrians on their way to winning the trophy in 1956/57.

Rapid's best performance in the European Cup came in the 1960/61 season, when they reached the semi-final before being eliminated by eventual winners Benfica.

With both Austria Vienna and Wacker Innsbruck emerging as powers of their own in the 1960s and 1970s, the domestic trophies began to dry up, but Rapid returned to prominence in the 1980s, winning back-to-back titles in 1981/82 and 1987/88, either side of an appearance in the European Cup Winners’ Cup final in 1985, where they were beaten 3-1 by English club Everton.

Another appearance in the Cup Winners’ Cup final followed in 1996, but this time French side Paris Saint-Germain triumphed 1-0.

In the three-plus decades since that 1987/88 title win, Rapid have been crowned champions of Austria on three more occasions, with first Austria Vienna and latterly RB Salzburg enjoying periods of domestic dominance.

With Salzburg’s resources and outstanding recruitment making it difficult to see them being overhauled anytime soon, Rapid may have to make do with aiming for second place for the time being, but that is exactly where they finished last term, both in the regular season and the Championship round that followed.

That achievement secured European qualification for the 55th time in the club’s illustrious history.

However, they probably need to win their final two Group H fixtures to emulate their achievements of 2015/16 and 2018/19, when they successfully negotiated the group stage to reach the knockouts.

West Ham United will tackle Austrian opposition for just the second time in competitive football when they take on Rapid Vienna at the Allianz Stadion on Thursday evening.

The first, of course, was the 2-0 UEFA Europa League Group H win the Hammers secured over Rapid at London Stadium back on 16 September, when Declan Rice and Said Benrahma goals settled the tie in the Londoners’ favour.

However, the two clubs had met previously, when West Ham hosted Rapid at the Boleyn Ground in a ‘Floodlight Match’ on the evening of Tuesday 15 November 1955.

The Irons had installed floodlights at the Boleyn Ground in 1953, playing their first match ‘under the lights’ against Tottenham Hotspur in April of that year.

Two-and-a-half-years on and the Hammers had got into the habit of hosting regular evening fixtures against overseas opposition, with West Germans VfB Stuttgart, Austrians SC Wacker, Italians AC Milan and Holland Sports Club of Rotterdam all paying a visit during the 1954/55 season.

And when Rapid Vienna became the first mainland European visitors of 1955/56 (Distillery of Northern Ireland had been beaten 7-5 in mid-October) they were already well on their way to being crowned national champions for the 20th time in their history when they arrived in Upton Park.

The free-scoring Rapid made a superb start, winning seven of their opening ten games prior to flying to England, scoring 30 goals in the process. The goals had been shared around, with Rapid’s prolific strikers Robert Dienst and Alfred Körner netting 13 between them.

West Ham, meanwhile, were having a much tougher time of things, having slumped to 15th in the Second Division table following a 3-1 defeat at Hull City on 12 November.

Ted Fenton was in the process of rebuilding his squad, with his own forwards John Dick and Billy Dare scoring goals galore, but too many being conceded at the other end to produce consistent results.

And it was Dare who found the net against Rapid, scoring from close-range to secure a creditable 1-1 draw against the Austrian visitors.

The 37-year-old is an experienced referee who has taken charge of 13 UEFA Europa League ties in his career, including two group-stage ties this season.

Hailing from Rostov-on-Don, Ivanov has refereed since 2012 in the Russian Premier Liga, where he has taken charge of matches involving current West Ham United players Nikola Vlasic and Alex Kral, who were playing for CSKA and Spartak Moscow respectively, among others.

He also refereed two UEFA Euro 2020 qualifiers and was the man in the middle for three 2022 FIFA World Cup qualifiers this year involving the likes of Portugal, Finland and Slovenia.

Ivanov has yet to officiate a competitive match involving a senior English or Austrian club in European competition.