West Ham United face Manchester United for the second time in four days on Wednesday when they head to Old Trafford for a Carabao Cup third round tie.

Having suffered the heartbreak of a late defeat to the Red Devils at London Stadium on Sunday afternoon, David Moyes’ men will be keen to bounce back in the North West, when their EFL Cup campaign gets underway.

Both teams enter at this stage, as they are involved in European competition this term, and the Hammers will be aiming to better their run from last season, when they were eliminated in the fourth round by Everton.

Ole Gunnar Solskjær’s men reached the semi-finals last term, before losing to eventual winners Manchester City and they have lifted this trophy on five occasions, most recently in the 2016/17 season.

West Ham’s best performance in the EFL Cup came in the 1965/66  and 1980/81 seasons when they were beaten finalists, by West Bromwich Albion and Liverpool respectively.

Here’s everything you need to know about Wednesday’s cup tie.

West Ham were allocated up to 8,000 tickets for this fixture and Claret Members, Season Ticket Holders and Bondholders can still secure their seat for Old Trafford by clicking here.

Wednesday’s kick-off is at 7.45pm, with the tie being broadcast live on television by Sky Sports in the UK. Please check local listings for TV coverage in your territory if you live outside the UK.

With the fixtures coming thick and fast in September, David Moyes could rotate his squad for the Carabao Cup tie at Old Trafford.

Summer loan signing from Paris St Germain, Alphonse Areola, will be hoping for a chance in goal, while Alex Král, who arrived on deadline day from Spartak Moscow, could also debut in midfield.

The likes of Issa Diop, Ryan Fredericks and Manuel Lanzini all impressed when called into action at Dinamo Zagreb a week ago and could make the team again at Old Trafford.

Michail Antonio is also available again after serving a one-match suspension for last Sunday’s league meeting between the teams.

West Ham will know all about Manchester United, having only just faced them in league action last weekend.

On that occasion, David Moyes’ men will feel desperately unfortunate not to come away with a share of the spoils having led through Saïd Benrahma’s deflected strike, and then held the score at 1-1 until the final minute, when Jesse Lingard broke their hearts with a fine finish.

A rare penalty miss from Mark Noble in the last minute of stoppage time meant the Red Devils took the points and ended the Hammers’ unbeaten start to the campaign.

The three points for Solskjær’s side, meanwhile, meant they kept pace with league leaders Chelsea and Liverpool, with the trio all on 13 points.

It has been a promising start to the campaign for the Red Devils, who of course added Cristiano Ronaldo – the scorer of Sunday’s equalising goal – to their ranks on the transfer deadline day.

The No7 has wasted little time in settling back into the familiar surroundings of Old Trafford either, scoring on all three of his appearances so far to get Reds fans dreaming of a return to their heady days.

Manchester United’s last trophies came in the 2016/17 season, when they won the double of UEFA Europa League and Carabao Cup.

A run of four seasons without success is a rarity in the modern era for the most successful club in English football, and their Norwegian former player Solskjær will be going all out to end that this term.

He has come close in his time in charge at Old Trafford, only losing last season’s Europa League final to Villarreal on penalties, and, judging by their performances so far this season, the chances of adding to the twelve trophies he won during his playing days at Old Trafford are strong.

However, West Ham will be looking to take one opportunity away from him in Manchester on Wednesday.

The most recent meeting in this competition was in the 2016/17 season when the Red Devils – en route to lifting the trophy – defeated the Hammers 4-1 at Old Trafford in the fourth round. Ashley Fletcher notched the visitors’ goal.

West Ham will look more fondly on their November 2010 clash at the Boleyn Ground, when a brace apiece from Carlton Cole and Jonathan Spector carried them to a thumping 4-0 triumph.

The third game in the EFL Cup came back in October 1985 when the Red Devils won 1-0 at Old Trafford.

In all competitions the teams have met 147 times. West Ham have won 45 of those, Manchester United 70 and the remaining 32 have ended all square.

David Moyes has faced Manchester United 32 times during his managerial career, 24 of them with Everton, two with Sunderland and six with West Ham United, winning four, drawing seven and losing 21.

The 50-year-old has refereed West Ham United 30 times in total since a 2-1 Championship defeat at Derby County on New Year’s Eve 2011.

His most recent Hammers appointment was the 3-3 Premier League draw with Arsenal at London Stadium on 21 March this year. 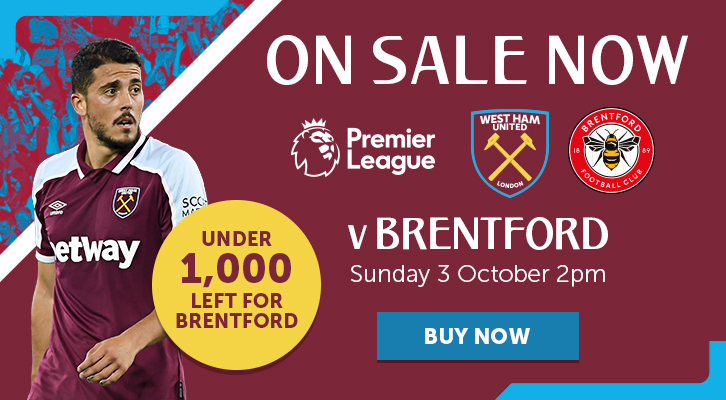