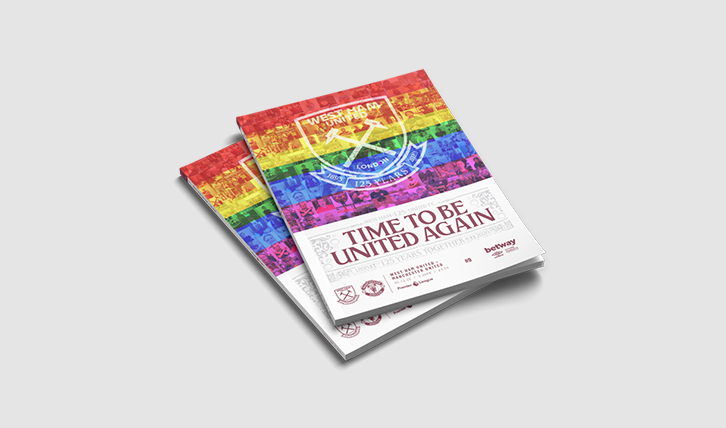 After nine months of football played behind-closed-doors due to the COVID-19 pandemic, 2,000 supporters will return to London Stadium to watch the Hammers in action against the Red Devils.

The Irons kick-off fifth in the table and are looking for a fourth straight Premier League win after victories over Fulham, Sheffield United and Aston Villa.

And, with the 5.30pm fixture also being screened live in the UK by Sky Sports and across the world by the Premier League's international broadcast partners, you can mark the occasion with our Official Programme, which is available to order here for just £3.50, plus £1.49 postage and packaging*.

Copies will also be on sale at London Stadium on Saturday, with sellers positioned either side of the turnstiles on Bridge 1.

In Saturday's issue, we celebrate the return of supporters to London Stadium and also express the Club's support for Stonewall's Rainbow Laces campaign, celebrating the impact that sport has on LGBT people, and the impact that LGBT people have on sport and considering how we can all play our part in making sport everyone's game.

Cover star Lukasz Fabianski reflects on a strong start to the season as he seeks to protect the best home defensive record in the Premier League.

Former West Ham and Manchester United striker Teddy Sheringham flicks through his West Ham Scrapbook, while Stuart Pearson, who won the FA Cup with both clubs, picks his Dream Teammates.

The Evening Standard's Ken Dyer speaks to Alan Curbishley about the famous Great Escape win at Old Trafford in 2007, columnist Mark Webster heads down the Added Time Tunnel, Irons legend Tony Cottee pens his regular column, Sid Lambert goes Back to the '90s to pay tribute to the late Les Sealey, and we continue to look back through the Club's 125th history.

There is an in-depth guide to Saturday's visitors, including the expert opinion of The Athletic's Carl Anka, plus author Tim Crane tells the story of his new book They Played with Billy Bonds – The West Ham Years.

For Esports fans, we take a trip down memory lane to marvel at West Ham's impact on historic video games!