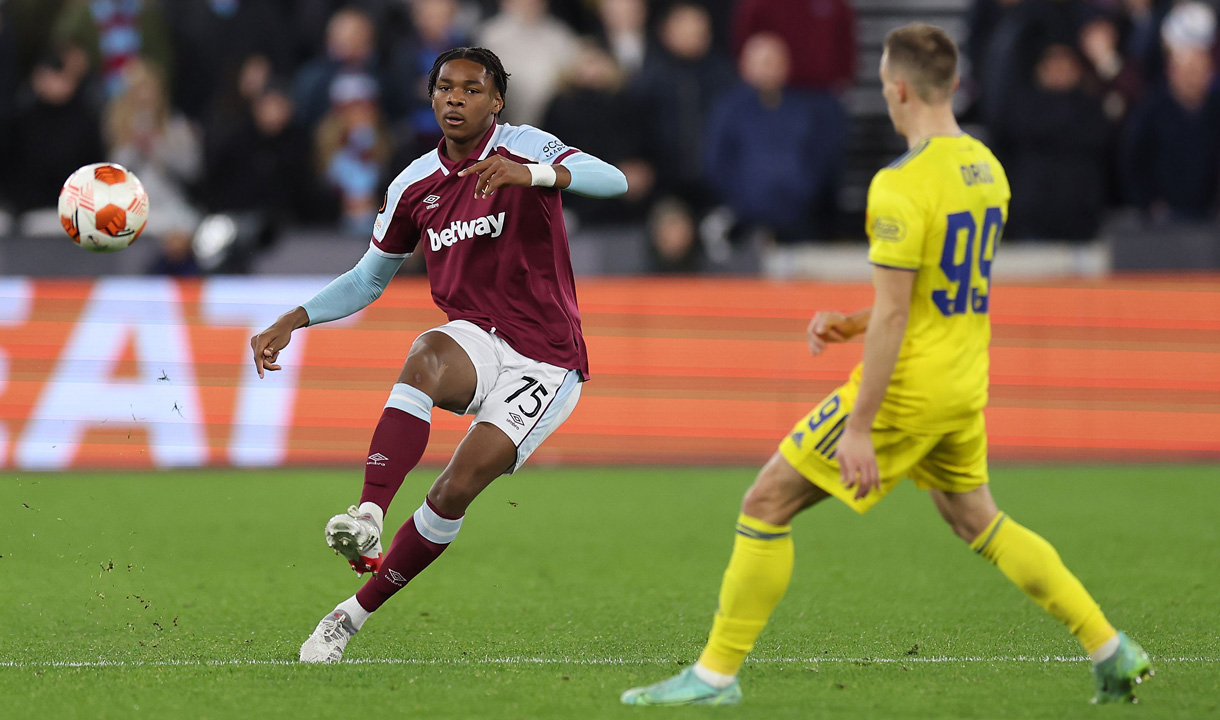 West Ham United’s Academy of Football prospects did the Club proud as no fewer than eight featured in a 1-0 UEFA Europa League Group H defeat by GNK Dinamo Zagreb.

Five youngsters started alongside captain Mark Noble and two more were introduced from the substitutes’ bench on a memorable Thursday evening in front of nearly 50,000 supporters at London Stadium.

The Hammers went into the game unbeaten in their opening five ties but, with progress direct to the round of 16 already assured, David Moyes opted to rest many of his regular starters against a Dinamo side who knew a point would take them through to the play-off round after Christmas.

And, after Croatia international forward Mislav Oršić’s spectacular third-minute opener, the visitors held on for the points they needed to go through.

In his final season, Noble led out the group of talented youngsters as captain; in fact, Perkins – West Ham’s youngest player – was only 196 days old when the 34-year-old made his Irons debut in 2004.

As the game kicked off, Dinamo Zagreb started on the front foot and were soon rewarded for their early intent. With only three minutes on the clock, Oršić found enough space on the left wing to cut inside and speculatively fire a wickedly dipping effort past Alphonse Areola and into the top right-hand corner.

After that setback, West Ham’s confidence grew as they began to find a foothold in the game, regularly testing the Zagreb back line with balls over the top for Perkins and Nikola Vlašić to chase.

The 17-year-old nearly headed West Ham back on level terms in the 19th minute, rising highest to meet Ashby’s cross from the right wing, only to watch his header sail over the crossbar.

The match quickly settled into a game of cat and mouse between the two teams: West Ham looked to squeeze the opposition up the pitch, probing for opportunities, but the visitors were more than happy to dig in with gritted teeth, aiming to hurt the Irons on the counterattack.

Dinamo captain Arijan Ademi had a golden opportunity to double their lead in the 32nd minute, but his free header failed to test Areola.

However, the Frenchman was called into action four minutes later as Luka Ivanušec’s effort from range needed tipping over the bar; the Croatian again came close from the subsequent corner, but his attempt curled wide.

At the other end, Ashby almost repeated Arthur Masuaku’s heroics against Chelsea at the weekend with an unexpected long-range effort from the wing, but the strike only managed to ripple the roof of the net.

Before coming off for Saïd Benrahma at half-time, Pablo Fornals came closest to an equaliser, but his left-footed, goal-bound shot was not able to find its way through the Croatian wall.

The sides shared spells of possession in what was a rather polite start to the second half, neither team willing to risk too much if it meant conceding the game’s all-important second goal.

In the 58th minute, Oršić almost hurt West Ham again from outside the penalty, stinging the gloves of Areola, who reliably parried his strike away to safety.

As the game ebbed and flowed into the final stages, Benrahma tested Croatia No1 Dominik Livaković from a free-kick, before Moyes ended the night by calling on midfielders Potts and Forson for their first-team debuts late on.

And, as full-time approached, U23s captain Alese had a half-chance to net a memorable equaliser, but a right-wing cross instead caught him unawares, the ball hitting him on the chest and bouncing through to Livaković.

Despite Thursday’s reverse, the Irons ended top of Group H on 13 points, with four wins, one draw and one defeat from their six Europa League matches – a return any of us would have taken back when our European tour began in September.