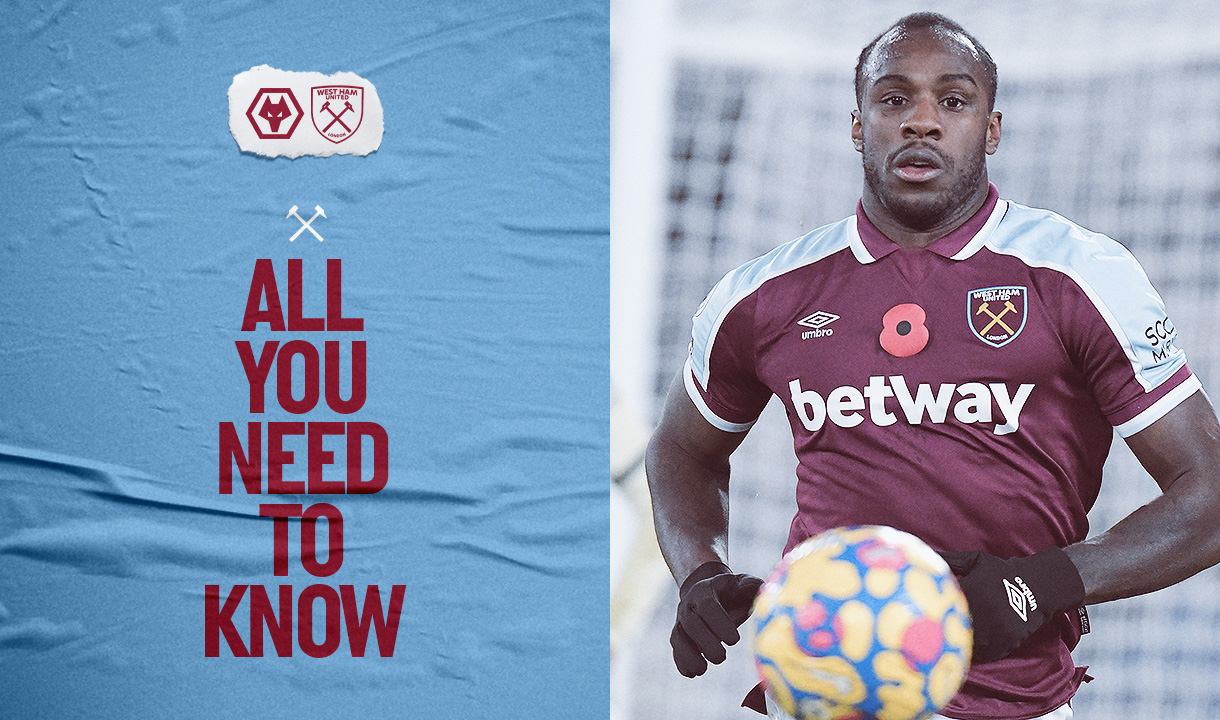 West Ham United take their unbeaten away record to Molineux on Saturday, when they face Wolverhampton Wanderers in a 3pm Premier League kick-off.

David Moyes' squad head to the West Midlands having not lost any of their previous eleven matches on the road in all competitions dating back to a 3-2 defeat at Newcastle United on 17 April.

Saturday's game will also see the Irons seek to extend their unbeaten run to eight matches in all competitions following Premier League victories over Everton, Tottenham Hotspur, Aston Villa and Liverpool, a UEFA Europa League home win and away draw with KRC Genk and a thrilling penalty shootout success against Manchester City in the Carabao Cup fourth round.

The Irons start the weekend with 23 points from eleven matches - the Club's best return from the opening eleven games since 1975/76 - and could finish the weekend level on points with leaders Chelsea if they lost at Leicester City in the Saturday lunchtime kick-off.

West Ham did the double over Wolves last season, winning 4-0 at London Stadium in September 2020 and 3-2 at Molineux in April.

However, if you want to watch David Moyes' high-flying Hammers in action, tickets are on General Sale for our upcoming home games with Brighton & Hove Albion and Dinamo Zagreb and will go on General Sale for the Premier League visits of Norwich City and Southampton at 11am on Friday 19 November.

Saturday's 3pm kick-off will not be broadcast live in the UK, but the game will be screened live in dozens of countries across the world. Overseas fans should click here to find out where to catch the match.

We will be covering the game live with a blog and audio commentary on whufc.com and our Official App and across our social media channels, with exclusive reaction to follow after the final whistle.

We will have goals and extended highlights for you on whufc.com at about 7pm and 12midnight on Saturday evening respectively.

David Moyes will be without Angelo Ogbonna after the Italian centre-back suffered a knee injury in the 3-2 home Premier League win over Liverpool a fortnight ago.

Andriy Yarmolenko and Nikola Vlašić both missed the Liverpool victory through injury but have since returned to action for Ukraine and Croatia respectively during the November international break.

Declan Rice withdrew from international duty with England through a non-COVID illness.

Wolves are without full-back Jonny Otto and winger Pedro Neto, who have long-term knee injuries, and Colombian defender Yerson Mosquera, who has undergone hamstring surgery.

Central midfielder Bruno Jordão has returned to training after his own knee injury, but is not expected to be available on Saturday.

Wolverhampton Wanderers were something of an unknown quantity at the start of the 2021/22 season, but so far things have gone well under new manager Bruno Lage.

The Portuguese replaced fellow countryman Nuno, who departed for a short spell at Tottenham Hotspur, and most Wolves fans were unsure of the 45-year-old's credentials.

Lage did not have a notable playing career, instead going into coaching in his early 20s and not holding a major managerial role until he was appointed by Benfica midway through the 2018/19 season and guiding the Portuguese club to the Primeira Liga title.

A former assistant of Carlos Carvalhal at Sheffield Wednesday and Swansea City, Lage departed Benfica in June 2020 and was out of work for a year before succeeding Nuno in June this year.

Three straight 1-0 defeats to kick-off the Premier League season raised further eyebrows, but Lage's Wolves have hit form since then, winning five out of eight in the top-flight to rise to eighth place ahead of the weekend.

The welcome return of Mexico centre-forward Raúl Jiménez following his recovery from a fractured skull has given Wolves a further boost, as has the form of summer signing Hwang Hee-chan, a South Korean forward on loan from RB Leipzig.

Wolves will hope their new manager and new-look strike force can combine to help them challenge for a top-seven finish for the third time in four seasons.

Tributes will be paid to former Wolverhampton Wanderers and England midfielder Ron Flowers at Saturday's game.

A FIFA World Cup winner and squad-mate of Bobby Moore, Martin Peters and Geoff Hurst in 1966, Flowers passed away on 12 November at the age of 87.

He spent 15 years with Wolves, helping the Molineux club win three League titles and an FA Cup, and made 515 appearances in Old Gold, scoring 37 goals.

The Doncaster-born star was also capped 49 times by England between 1955-66, scoring ten goals for his country.

Both teams will wear black armbands, wreaths will be laid and a minutes' applause will be held in Flowers' memory before kick-off.

Everyone at West Ham United would like to express sincere condolences to his loved ones at this sad time.

Jarrod Bowen scored twice in the 4-0 home win over Wolves in September 2020, then again in the 3-2 victory at Molineux in April, when Jesse Lingard and Pablo Fornals were also on target.

Overall, Wolves have won five of the ten Premier League meetings between the two clubs, with West Ham winning four and one draw.

West Ham’s first-ever meeting with Wolves ended in a thumping 5-1 FA Cup second-round win at Molineux on 5 February 1910. The Hammers were then a Southern League side, but they showed no fear of their Football League Second Division hosts, shocking the 17,000 crowd with West Ham’s first England international George Webb scoring a hat-trick and Danny Shea netting twice.

In all competitions, West Ham have scored 114 goals in their 67 competitive matches with Wolverhampton Wanderers. The Hammers have hit five on four separate occasions, with the biggest home wins being the 5-0 Division One successes achieved on 17 December 1960 and 7 September 1964.

Mike Dean was born in Wirral, just across the River Mersey from Liverpool, in June 1968, making him 53.

The first Premier League referee to show 100 red cards, Dean has refereed West Ham United on 61 occasions, including the 3-2 win over Manchester United in the final game at the Boleyn Ground in May 2016.