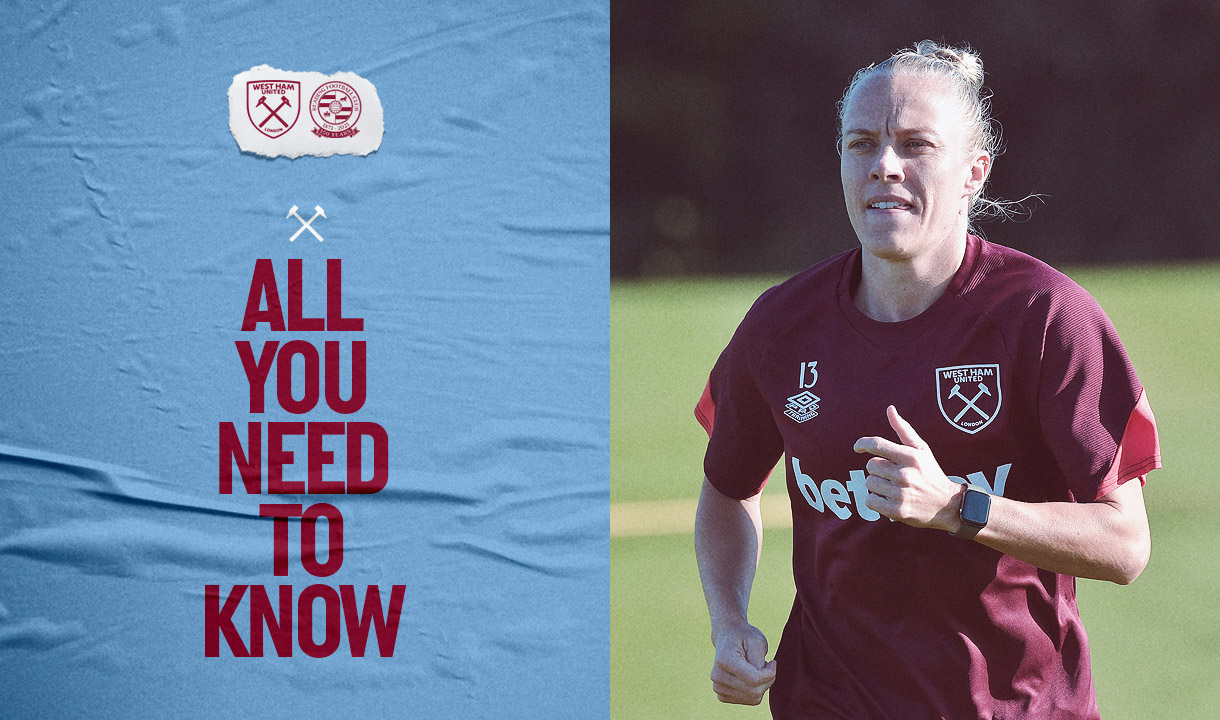 West Ham United host Reading on Women’s Football Weekend, and the Hammers will be hoping to celebrate by extending their unbeaten run at home this season.

Reading travel to east London having won their last two matches in the Barclays FA Women’s Super League, and will be hoping to make it three in a row.

Here’s everything you need to know about the contest at the Chigwell Construction Stadium.

Tickets are available on the day of the game for our match against the Royals, with the Ticket Office at the Chigwell Construction Stadium opening at 1pm on Sunday afternoon.

We would also like to ask supporters who are attending the match to be in their seats at least five minutes before the scheduled kick-off time. This is so that everyone can observe the 2 minutes silence on Remembrance Sunday.

The ticket office at the stadium will also close at 2:55pm, to allow our staff to observe the silence.

Maisy Barker is continuing to make good progress from the foot injury that she sustained in pre-season, but she will be unavailable for the clash against Reading.

Reading arrive at the Chigwell Construction Stadium having just started to find their form in the 2021/22 Barclays FA Women’s Super League season. The Royals have won their previous two matches against Aston Villa and Birmingham respectively and shouldn’t be underestimated.

Their manager, Kelly Chambers has had a long association with the club, having captained the club during her playing career, which spanned from 2007-2012. Her playing days were cut short though, after sustaining an anterior cruciate ligament injury.

After her retirement, Chambers was appointed Director of Women’s and Girls football, before moving on to become manager of the football club in 2015, with the side in the third tier of English football.

Chambers was briefly replaced by Jayne Ludlow for one season, but was re-appointed after Ludlow left to become Wales manager at the beginning of the 2015 season, where she would guide the Royals promotion and clinched the WSL2 title.

Since then, Reading have achieved eighth, fourth, fifth (x2) and seventh placed finishes during the past five seasons, as Reading have consistently been able to steer clear from the relegation places.

The Royals brought in Canadian gold medal winner, Deanne Rose who has made a flying start to the WSL campaign, grabbing two goals and one assist in her opening five games.

Natasha Dowie has also made her move back to the top division after spells abroad and will be another to watch out for.

"Reading provides us a new challenge as they approach the game in different and more direct and aggressive way.

"We know that they will be well organised in their approach and have some good players amongst their ranks who will look to show themselves if we allow them space and time to do so."

Tickets will be on sale at the Ticket Office at the Chigwell Construction Stadium on the day of the match, opening at 1pm.

We will also be bringing you live twitter updates as well as the usual array of reaction and highlights pieces on whufc.com.