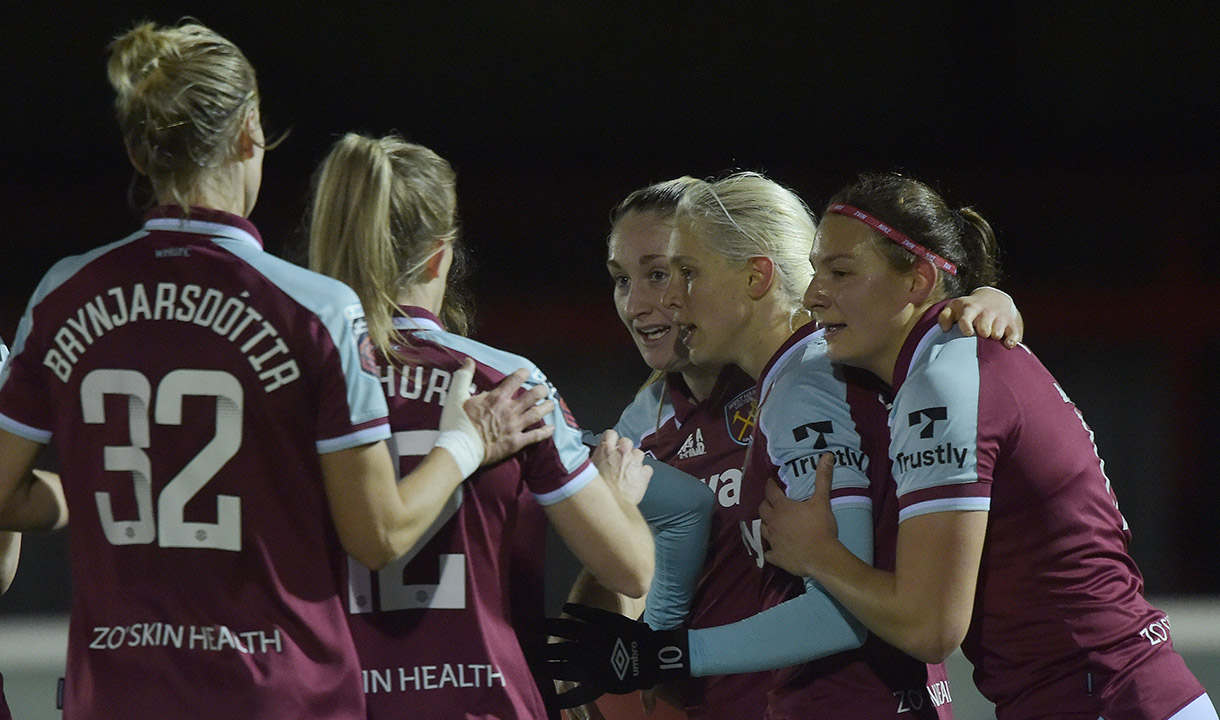 West Ham United Women take on Everton on Sunday at the Chigwell Construction Stadium in what will be their first home Barclays FA Women’s Super League match of the calendar year.

It promises to be an exciting contest in east London, with the Hammers looking to bounce back from a midweek defeat to Chelsea in the FA Women’s Continental Tyres League Cup quarter finals.

Victory on Sunday afternoon could move Olli Harder’s team up to as high as sixth place, whilst Everton currently sit one place below the Hammers in ninth, and will only leapfrog them if they win big due to goal difference.

Kick-off is at 3pm at the Chigwell Construction Stadium on Sunday 23 January 2022.

Tickets are available on the day of the game, with the Ticket Office at the Chigwell Construction Stadium opening at 1pm on Sunday afternoon.

The fixture will be shown live on the FA Player from shortly before 3pm.

West Ham United head coach Olli Harder will be without Canada international and Olympic Gold medalist Adriana Leon, who has undergone surgery on a fractured foot.

Maisy Barker is also still unavailable for selection due to the foot injury that she sustained in pre-season.

Harder will also be without Australia internationals Mackenzie Arnold and Tameka Yallop and Japan midfielder Yui Hasegawa, who are all away on international duty representing their countries at the AFC Women's Asia Cup in India, which began on Thursday.

Hawa Cissoko, who was sent off for two bookable offences in last weekend’s draw at Tottenham, will also be unavailable again on Sunday due to the sending off being her second red card of the season – meaning she is suspended for two games.

Nicoline Sorensen is the only known absentee for Everton, having suffered a nasty Anterior Cruciate Ligament injury in September 2021.

Everton are hoping that 2022 will be the year in which they begin to challenge at the top end of the Barclays FA Women’s Super League.

Having invested heavily in the summer, it looked likely that Everton would be the side that would be challenging the likes of Chelsea, Manchester City and Arsenal for a Champions League position come the end of the season.

However, after defeats against that exact trio during the first five games of the season, manager Willie Kirk left the club.

He was replaced by Champions League winning coach, Jean-Luc Vasseur, who had been sacked by Lyon Féminin in the spring having failed to retain the Division 1 Féminine title, losing out to Paris Saint-Germain.

It’s been slow going for the Toffee’s in the WSL this season, winning only one match with Vasseur at the helm, whilst finishing 3rd in an albeit strong Continental Tyres League Cup group, which contained both Manchester clubs, Leicester, and Durham.

Goals have been a problem for the Blues this term, scoring nine, which is the second lowest in the division – and they have only scored more than one goal in a game on one occasion.

And Vasseur said that he wanted to see his team score first in his latest press conference that looked ahead to the upcoming contest.

The previous meeting between the two sides ended with a 1-1 draw at Walton Hall Park. Zaneta Wyne had given Harder’s side the lead, but a lapse in concentration at the back allowed Toni Duggan to fire in an equaliser back in December.

Toni Duggan: A forward that needs very little introduction. Duggan returned to the club where it all began in the summer after four years in Spain with Atlético Madrid and Barcelona. The now 30-year-old striker is looking to help the Toffee’s reach the upper echelons of the table and has experience of doing so – winning the division with Manchester City in 2016. This season, Duggan has one solitary goal in the WSL, which came against the Hammers in December.

Izzy Christiansen: Christiansen has been with Everton since the middle of the 2019/20 season having joined the Toffees from Lyon Féminin, where she won the Champions League in the previous season – and were managed by Vasseur at the time of her departure. The 30-year-old likes to dictate the play and will need to be closely watched should she feature on Sunday.

Hanna Bennison: Everton broke their transfer record when they signed Bennison in the summer, in what was described as a “substantial six-figure sum”. The Swedish midfielder was the third member of the Sweden Olympic team to make the move to the Blues, alongside Nathalie Bjorn and Anna Anvegard.

Tickets for Sunday's game are available to purchase from the ticket office on the day of the match, which opens at 1pm.