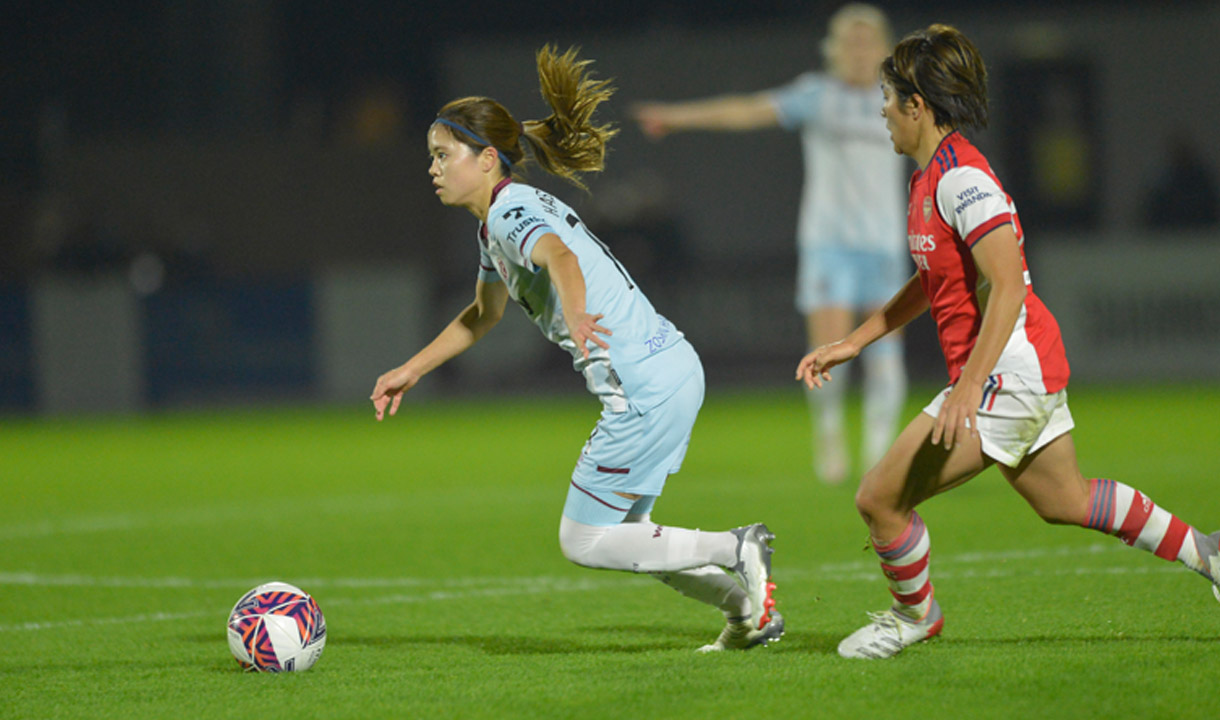 Two goals from Kim Little, a fierce strike from Beth Mead and an unfortunate own goal from Grace Fisk secured the victory for the home side, with the Hammers failing to come away with anything, despite their hard work on the night.

Olli Harder made one change from the Hammers’s last league outing, with the injured Adriana Leon replaced by Abbey-Leigh Stringer.

And it was Harder’s side who had the games first chance, with Walker stabing an effort wide of the goal with only five minutes into the contest.

Arsenal goalkeeper Manuela Zinsberger was almost caught out with a long-range effort, but the Austrian got back to scramble the ball off her line.

And the east Londoners continued to have the best of the possession in the opening exchanges – on what was a bitterly cold night in North London.

Nikita Parris had the home sides first chance of the night, as she sprinted in behind the Hammers rear-guard, before bending an effort wide of Mackenzie Arnolds far post.

The Gunners went close again moments later. Some good work down the left was almost rewarded, but a deflection took the ball onto Arnold’s post, before Kate Longhurst was able to hack the ball away.

The home side started to take control of the contest on their own patch, this time Leah Williamson fired an effort narrowly wide after the Irons had switched off from a sort corner.

Arnold then had to deny her fellow Australian, Caitlin Foord from close range, with what was a superb hand to deny the forwards header from finding the back of the net.

And Arsenal went even closer with 26 minutes gone, when somehow Mead’s shot wasn’t turned in at the back post by Mana Iwabuchi.

The pressure from the home side continued, with Arnold again denying Foord, who waltzed her way into a shooting position after some good work down the right.

Tameka Yallop fired over from range, as the Hammers managed to break Arsenal’s constant pressure, and continued to look dangerous on the counter attack when chances presented themselves.

But Arsenal looked determined to go in ahead at the break, and they got their goal with 5 minutes to play before the whistle sounded – Kim Little finding the back of the net despite suspicions of offside in the build-up.

After the break, Grace Fisk made her long-awaited return from injury, replacing Hawa Cissoko.

Dagny Brynjarsdottir had the first chance for either side in the opening stages of the second half, but her header nestled in the stand behind the goal.

But Arsenal were clinical in their attacking play, pouncing on a mistake at the back – with Little adding her second of the game with a venomous shot.

Arnold was once again called into action by Mead, as she superbly tipped the forwards strike onto the crossbar – a fantastic save by the Australian.

But the Gunners continued with the their dominace and added a third through Mead, who made no mistake from inside the area, smashing the ball beyond the outstretched hands of Arnold.

Yui Hasegawa went close for the Hammers with 10 minutes of the match remaining, but the effort was blocked by the Gunners.

And the home side added to their advantage, as Grace Fisk inadvertently sliced the ball beyond Arnold and into the back of the net.

The game ended without any further goals, with the Hammers now looking towards next weekend's clash with Reading at the Chigwell Construction Stadium as they look to bounce back.