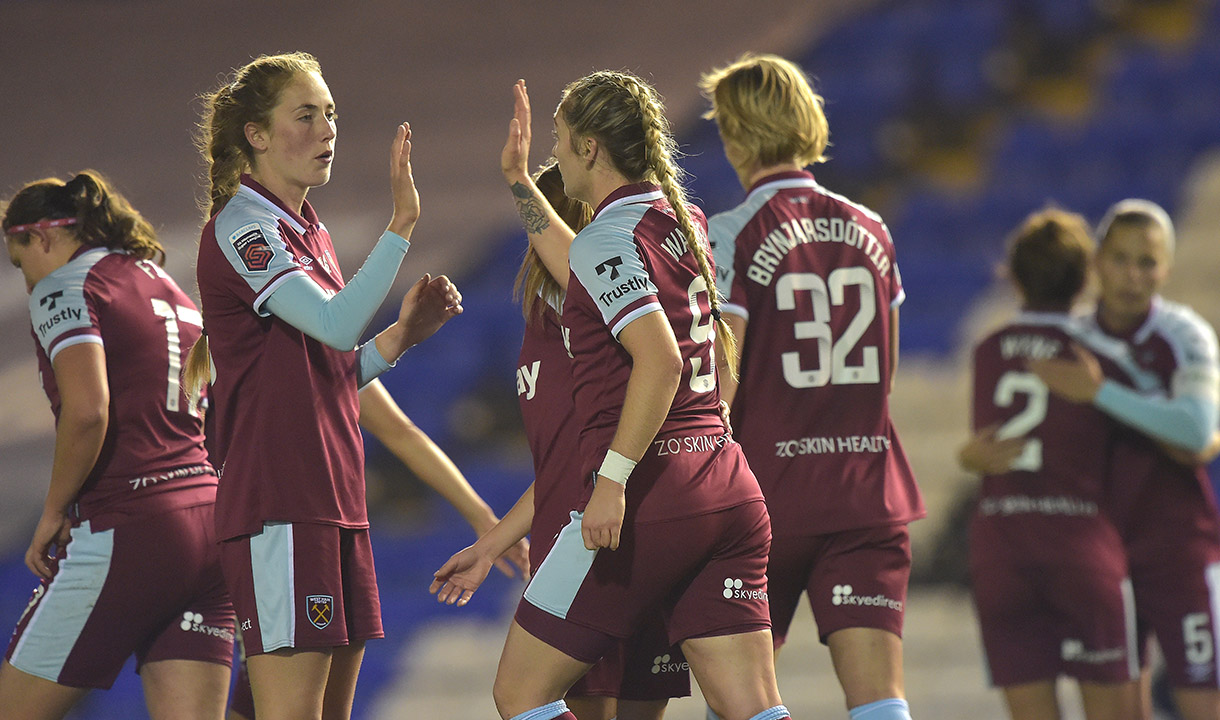 West Ham United all but confirmed their place in the knockout stages of the Continental Tyres League Cup with a convincing 4-0 victory over Birmingham City.

The Hammers controlled proceedings at St Andrew’s and were two goals ahead at the break thanks to a Louise Quinn own goal and a placed effort from Claudia Walker.

There was no let-up in the second half, as Lucy Parker and Katerina Svitkova added further goals to complete the rout.

Olli Harder elected to make six changes for the clash with the Blues. Anna Leat, Lucy Parker, Lois Joel, Zaneta Wyne, Mel Filis and Dagný Brynjarsdóttir all come into the starting XI for the trip to St Andrews.

The Hammers looked control the play in the opening five minutes, and Zaneta Wyne tested Marie Hourihan from an acute angle which the goalkeeper saved comfortable – the first chance of the match for either side.

The game settled into a familiar pattern, with Harder’s side controlling the play – whilst the home side looked to take advantage of any turnovers that came their way.

Claudia Walker had the games first clear-cut chance when she stabbed the ball towards goal, but Hourihan managed to tip the ball onto the post.

And Walker should have put the Hammers ahead 10 minutes later when Mel Filis found the forward in space inside the area – but she couldn’t keep the shot on target and it ended up behind the goal.

The forward had been lively throughout, and was involved in the opening goal of the game. Walker’s cross from the by-line was turned into her own net by Blues captain Louise Quinn.

And she had a goal of her own three minutes later. Zaneta Wyne rolled the ball into the forward, who turned and fired the ball beyond a stretching Hourihan to give the east Londoners a two goal lead at the break.

The home side knew they had to commit more bodies forward if they were going to get back into the game, and they started the second half in a more positive fashion. Lisa Robertson fired over from range with one of their first meaningful shots on goal.

As the game progressed, it looked likely that Harder’s side would add a third, as they continued to have the better of the play. They did so with 73 minutes gone – Lucy Parker firing in for her second Conti Cup goal in as many games.

And that wasn’t the end of it for the Hammers, as Katerina Svikova added her name to the list of goalscorers with a powerful drive – giving the away side a convincing victory in Birmingham.

Harder’s side will now face Brighton & Hove Albion on Wednesday 15 December in their final match of Group E.