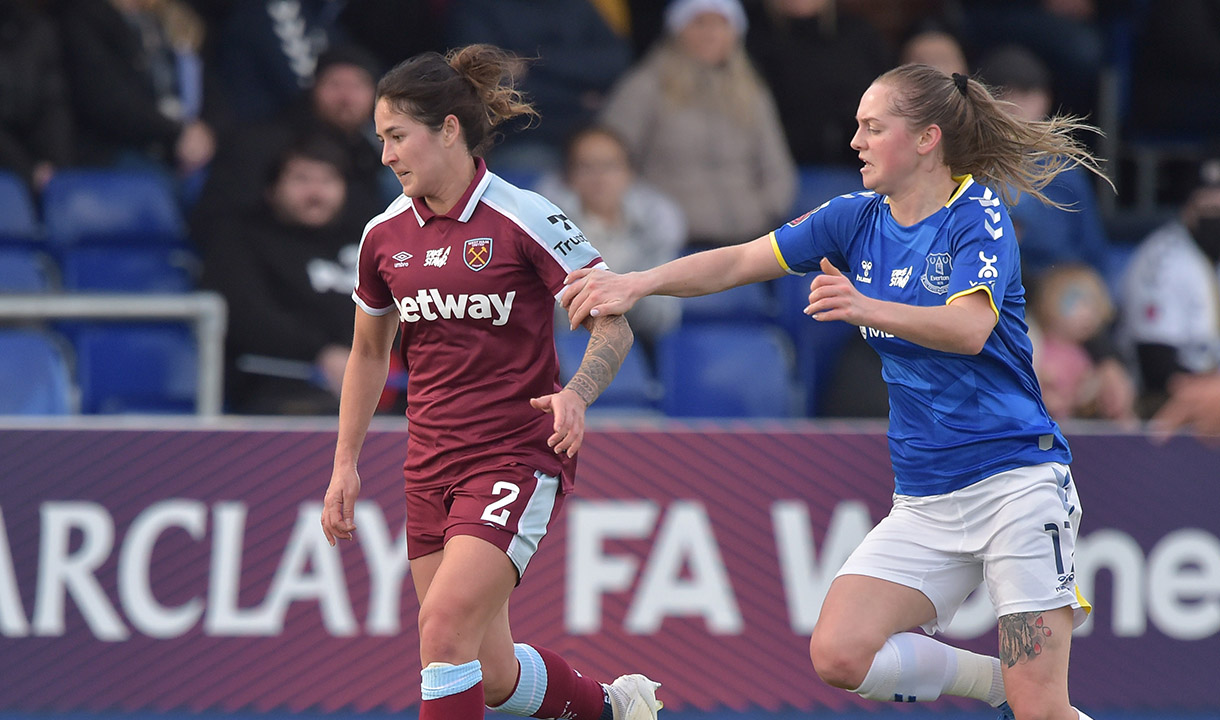 West Ham United Women were forced to settle for a point against Everton, as Toni Duggan equalised late on in a tightly contested contest at Walton Hall Park.

Zaneta Wyne put the Hammers in control shortly before the break, but Duggan ghosted into the box with 15 minutes to play and calmly converted beyond Mackenzie Arnold to share the spoils in the Barclays FA Women’s Super League contest.

Olli Harder made two changes to the side that beat Tottenham Hotspur before the international break, with Zaneta Wyne and Abbey-Leigh Stringer coming back into the Starting XI in place of Claudia Walker and Kate Longhurst, who dropped to the bench.

It was a quiet affair in the opening exchanges, but the Hammers did go closest after eight minutes. Katerina Svitkova’s cross was almost met at the back post by Dagny Brynjarsdottir, but the Icelandic midfielder couldn’t quite reach far enough.

And the midfielder had a golden opportunity to open the scoring moments later, her effort trickled narrowly wide of the post after the home side failed to clear the ball away.

The hosts settled into the game after the early chance for the Hammers and had a chance of their own with 15 minutes on the clock. Danielle Turner’s shot was well closed down on the edge of the area by several West Ham United bodies.

Tameka Yallop had a good chance to give the away side the lead, but her effort trickled narrowly wide of the post, as the Hammers continued to press for the opening goal.

It was very much to-and-fro in the remainder of the first half, but one moment of quality gave the Hammers the lead. Svitkova drove into the penalty area and squared the ball across for Zaneta Wyne to score her first goal in Claret & Blue!

In the second half, the Hammers looked the most likely to grab the second goal of the afternoon, with Lisa Evans stinging the palms of Sandy Maciver in the Everton goal just after the break.

And the home side almost got themselves back into it on the hour mark, but Lucy Graham’s header soared narrowly over the crossbar from Poppy Pattinson’s corner.

It was a largely uneventful second half at Walton Hall Park, that was until Toni Duggan sneaked into the penalty area and calmly converted beyond Mackenzie Arnold.

The hosts looked for another, but a combination of poor finishing and good defensive work from the Hammers meant that the score stayed the same, and Harder's side had to settle for just the one point.

That extends the teams unbeaten run to four matches, with a tough test against Brighton & Hove Albion to come on Wednesday evening.