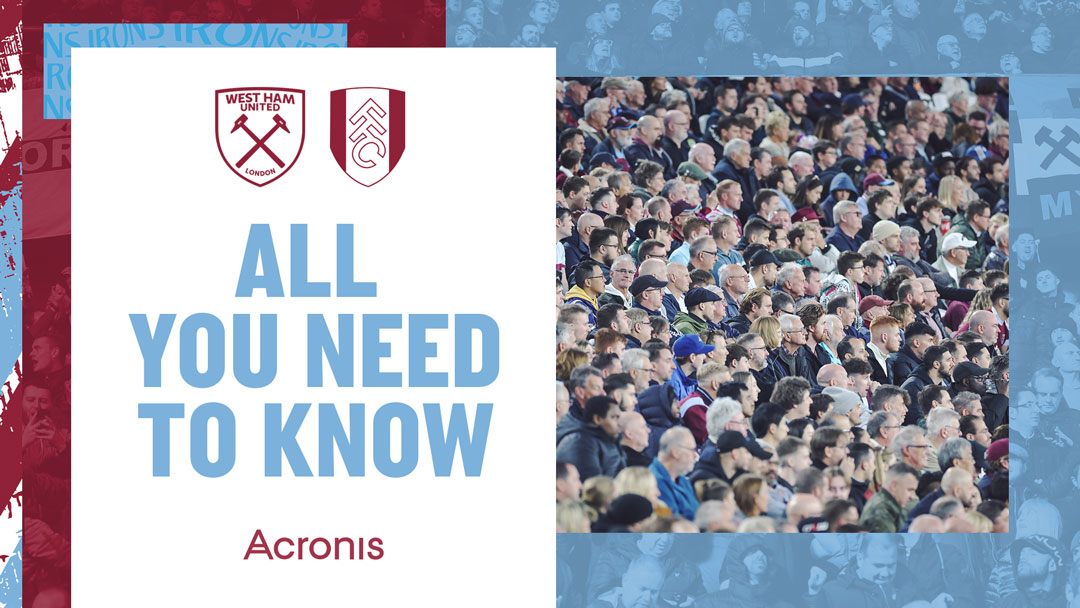 West Ham United v Fulham - All You Need To Know

The Hammers are seeking a third victory and clean sheet in the space of eight days after defeating Wolverhampton Wanderers 2-0 on home turf last weekend and RSC Anderlecht 1-0 in Brussels in the UEFA Europa Conference League on Thursday evening.

Those successes took David Moyes' side out of the bottom three in the Premier League and five points clear at the top of Group B in Europe respectively.

Fulham, meanwhile, have made a good start on their latest return to the top-flight, winning three and drawing two of their opening eight matches to go into the weekend in eighth place.

Make sure you don't miss out on a ticket for this sold-out fixture, as seats are available to buy or relist on the Ticket Exchange!

Supporters can purchase their seats on the Ticket Exchange, while Season Ticket holders who cannot make this match can also relist their seat, allowing fellow fans the chance to be at a London derby and fill London Stadium with the Claret and Blue Army.

Sunday's game will NOT be broadcast live in the UK, but it will be shown on TV across the world by the Premier League's international broadcast partners. You can listen to live radio commentary in the UK on BBC Radio 5 Live.

Thankfully, there is no rail strike on Sunday, so mainline and Elizabeth line train services will be running. However, there is a strike on Saturday, so early-morning services on Sunday may be affected, and there is a lot of engineering works going on...

There will be no London Overground service on Sunday between Surrey Quays and Clapham Junction, or between Stratford and Gospel Oak, with replacement busses in operation.

Supporters are advised to check their journeys before travel, with resources such as TfL's Journey Planner or the TfL Go app helping to plan your journey.

Greater Anglia services between Ingatestone and Colchester, including the Braintree branch, will be replaced by busses.

c2c services on the Basildon and Ockendon lines will both be disrupted by engineering works. Between Fenchurch Street and Barking, services will be diverted to Liverpool Street and will call additionally at Stratford but will not call at Limehouse or West Ham.

West Ham United Season Ticket Holders attending Sunday’s Premier League fixture at London Stadium are reminded that they will need to download their NFC (Near-Field Communication) Season Tickets to their mobile phone ahead of the game.

With London Stadium set to host another capacity 62,500 crowd, we have produced a bumper issue crammed full of exclusive interviews and exciting content for fans of all ages, complete with a double-sided A3 poster.

Cover star Alphonse Areola reflects on his journey from playing junior football in the shadow of the Eiffel Tower to parading the FIFA World Cup down the Champs-Élysées, the strong family values that give him strength and the prospect of facing his former club.

David Moyes has a near fully-fit squad to pick from for Sunday's game, with only two potential absentees.

Maxwel Cornet suffered a lower-leg injury in last Saturday's 2-0 home win over Wolves, while Morocco defender Nayef Aguerd has stepped up his fitness work as he recovers from an ankle injury, but he is not yet ready to return to action.

For Fulham, Serbia centre-forward Aleksandar Mitrović was taken off with an ankle injury in last weekend's home defeat by Newcastle United. Midfielder Nathaniel Chalobah was sent-off in the same game and will miss the trip to London Stadium through suspension.

Fulham will hope it is third time lucky after their last two Premier League campaigns ended with a swift return to the Championship.

Owner Shahid Khan’s NFL franchise, the Jacksonville Jaguars, have started the new season strongly, and the early signs are also good for his Association Football club.

Consecutive seasons in the top-flight will be the aim for American businessman Khan, who brought Fulham in 2013 and, in nine years since, has suffered three relegations and enjoyed three promotions.

This time around, Khan has adopted a more reserved approach when it comes to recruitment, appearing to go for quality rather than quantity.

After guiding Fulham to the EFL Championship title in his first season at Craven Cottage, Marco Silva spent the summer keeping hold of his best players, and adding proven Premier League quality to play alongside them.

Of course, holding onto Aleksandar Mitrović was task one this summer, after the Serbia striker plundered 43 Championship goals last term.

Silva’s side have scored in seven of their eight matches, netting 13 in total, with Mitrović notching six of them.

While there is a long way to go, and a 4-1 home defeat by Newcastle United last weekend was a reality check, there is enough quality and experience in the Fulham squad to have Cottagers supporters feeling optimistic that they could re-establish themselves as Premier League regulars.

Fulham remained in the top-flight for 13 years after being first promoted in 2001, thriving under the likes of Jean Tigana, Chris Coleman and Roy Hodgson, who also led the west Londoners to the UEFA Europa League final in 2010.

While a repeat of that achievement will likely be beyond Silva, he has certainly made an encouraging start.

West Ham United and Fulham meet in the Premier League for the 25th time on Sunday.

The Irons have had the best of things by far down the years, winning 14 of the 24 meetings, while the Whites have won just four, with six draws.

The most recent Premier League meeting at London Stadium ended 1-0 in the Hammers' favour back in November 2020, when Tomáš Souček scored in the 91st minute, then Ademola Lookman missed an even later penalty.

Fulham have not won on any of their last ten Premier League visits to east London dating back to a 2-0 victory on 3 November 2001, over 20 years ago. However, the Cottagers did win an FA Cup fifth-round replay at the Boleyn Ground in February 2004. 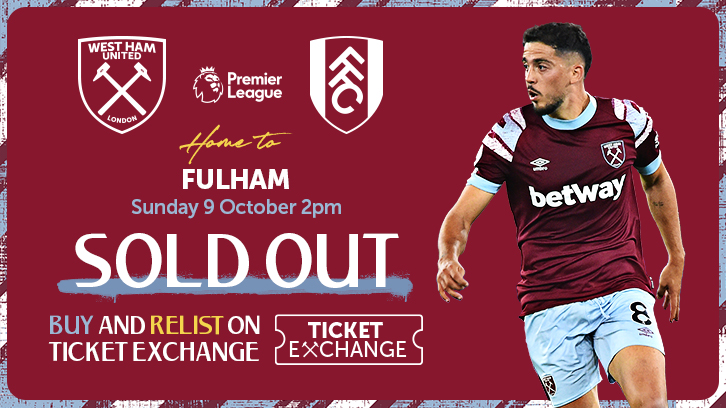