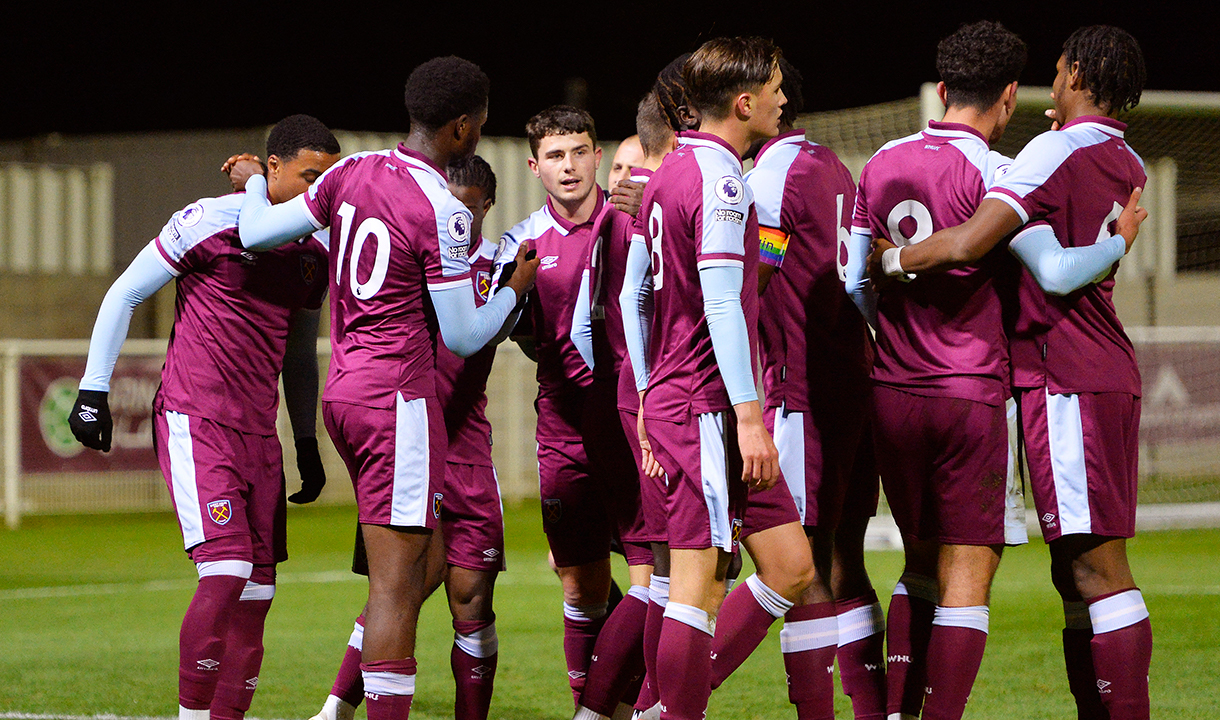 After many of them featured in a night to remember for the Academy of Football in the UEFA Europa League on Thursday evening, West Ham United U23s play their final Premier League Cup game prior to the festive break on Monday.

Having won two out of their three opening group-stage games, the Hammers will now begin tackling the reverse of those fixtures, aware that - sitting second currently - a win on Monday would all but seal their qualification from Group F.

As the U23s prepare to host Wolverhampton Wanderers, here’s all you need to know about the game, which kicks off at 2pm on Monday 13 December and will be played behind closed doors at Rush Green Stadium...

Following successive 4-2 away wins over Crystal Palace and Swansea City so far this month in Premier League 2 and the Premier League Cup respectively, Mark Robson's development squad have now won their last five games in all competitions - part of a run of eleven wins in their last 13 games.

Now, to cap a half-season which has seen them move four points clear at the top of Premier League 2, West Ham's development squad will hope to put clear daylight between themselves and the chasing pack in the Premier League Cup.

After three games, they currently sit second on six points, three behind Monday's opponents Wolves, who defeated them 1-0 back in September in a tight game.

Since then, however, they have staged a remarkable 3-2 turnaround against Exeter City in east London in October, scoring twice in the last five minutes to win; and a largely controlled 4-2 win over Swansea City U23s at Landore Training Centre a week-and-a-half ago.

Exeter and Swansea both have one point after three matches, so a win for West Ham on Monday would put them eight points clear of those two sides with three games remaining - and the top two teams in each group progress.

What's more, given that West Ham have scored one more goal in those three games than Wolves (seven to the visitors' six), any win would see them leapfrog their fellow Category One academy at the top of Group F.

After establishing such a commanding position in the league table, there is every possibility the Hammers could attain a similar status in the Cup prior to Christmas.

Taking a similar format to the UEFA Champions’ League, where 32 teams are divided into eight groups of four, each team plays their three opponents both home and away over the course of the first six months of the competition, before one-off knockout ties ensue between the last 16 from March time onwards.

Contested between Under-23 players, each side is allowed to field three over-age outfield players and a goalkeeper born before 1 January 1998 in the 2021/22 season.

West Ham have been drawn in Group F alongside Category One Academy Wolves, Category Two Swansea and Category Three Exeter, who beat out Plymouth Argyle in qualification.

This campaign marks the first time in five seasons in which West Ham have competed for the trophy, but it was not all that long ago that they won it: in 2015/16, after a two-legged final ended in 1-0 home wins for both sides, the U21s defeated Hull City U21s on penalty kicks at the KC Stadium.

Wolves U23s have a proud record of progressing their youth into the first-team ranks.

Managed by former Crewe Alexandra midfielder James Collins, who quit professional football early on to pursue coaching and is of no relation to the West Ham fans’ favourite, the likes of Oskar Buur, Morgan Gibbs-White and Max Kilman have all progressed under his tutelage in the last couple of seasons.

While a number of Wolves’ players who were on the precipice of the first team departed on loan at the onset of the new season, plenty of fledgling talent has remained in the East Midlands - albeit with their U23s teams this season having a particularly youthful look.

It was an energy which served Wolves well in the first group meeting between these two sides back in early September, when the hosts' greater intensity at Kidderminster Harriers’ Aggborough Stadium saw them record a narrow, but admittedly deserved, 1-0 win over West Ham, who struggled to create chances after falling behind early on.

Having finished fourth in Premier League 2 Division 2 last season - when they suffered a 3-2 defeat to now-promoted Crystal Palace in the play-off semi-finals - the visitors have endured mixed fortunes in their league campaign this time around.

Five wins from 14 games sees them sit eighth in the second tier just past the halfway mark, albeit only four points behind the play-off places, such is the congested nature of the competition.

Wolves have been on the wrong end of heavy losses in their last two games - a 5-0 home defeat to Norwich City followed by a 4-2 away loss at Fulham - but did record two wins and a draw from their three games prior to that.

Consistently finding the back of the net has been a key issue for Wolves so far, rendering them the division's bottom scorers with just 15 goals in those 14 games, but their decent defensive record has kept them in contention.

The only other player to score twice for Wolves U23s so far this season was 18-year-old forward Harry Birtwistle, who finished off an early counter-attack to settle a low-quality Group F opener back in September.

West Ham's development squad put in a flat performance that day, but have improved immeasurably since, and will be hoping to right the wrongs from that day this time around.

West Ham United U23s lead coach Mark Robson: “At the moment the boys are in a really, really good place, and I can see them really trying hard.

"They’re working hard together as a team, and their confidence is sky high at the moment, so we'll look to keep recent performances going – both in possession and out of possession, because it’s not just about attacking, it’s about defending too.

"I thought we won the game against Crystal Palace because of the quality of our defending, and we’ll go into the game with the same approach. Hopefully we can get another win.”

You can still follow proceedings, however, with our live blog on whufc.com from 1.30pm and Twitter updates, and there will be post-match reaction and highlights pieces available over Monday afternoon and Tuesday morning.