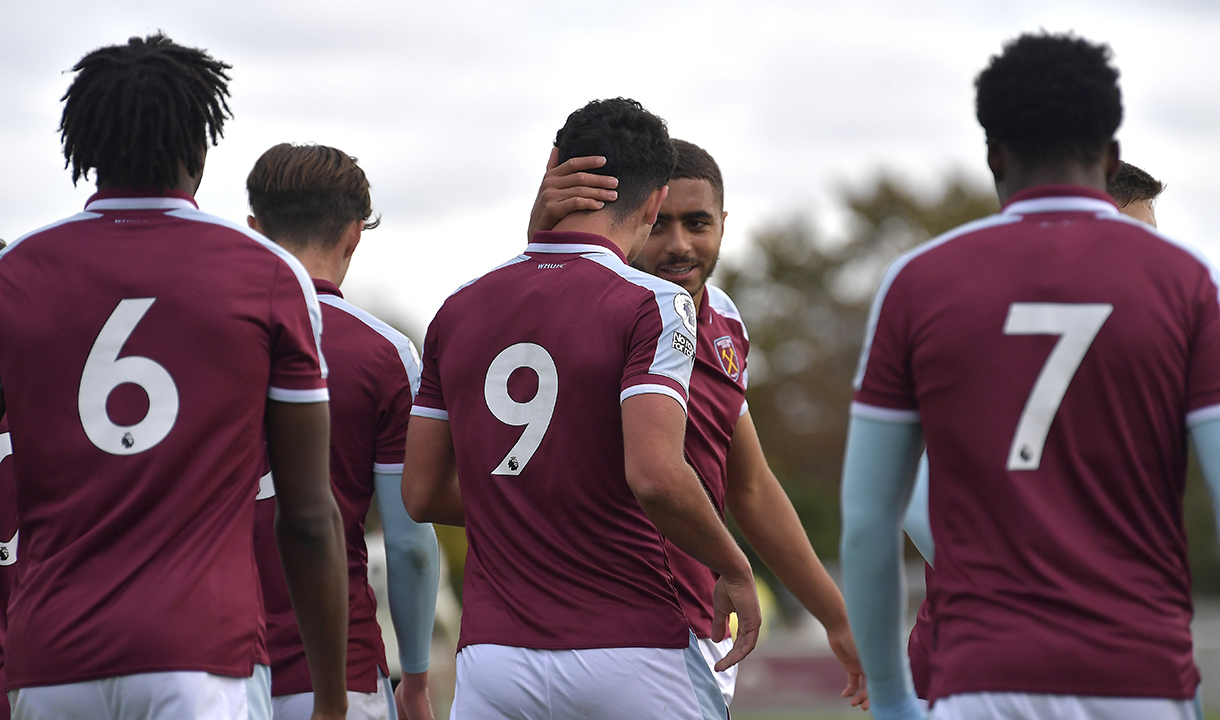 Mark Robson will experience his first game in charge of West Ham United U23s on Saturday afternoon, aware that a draw or victory would see his new side – albeit potentially temporarily – go top of Premier League 2 Division 1.

The Hammers’ new U23s lead coach has returned to the Club almost 30 years since he first signed as a player, taking charge with the junior Hammers sitting second in the table – just a point behind table-toppers Arsenal, and with a superior goal difference.

His first game, however, falls against third-placed Manchester City U23s, last season’s champions who suffered a blip in form prior to the November international break.

Here’s all you need to know about Saturday afternoon’s encounter, which kicks off behind closed doors at 1pm…

West Ham United U23s’ story so far this season – much like their first team’s – has been a supremely positive one.

Prior to Dmitri Halajko’s departure for a new challenge at the Premier League, the Hammers’ development squad had won seven of their eleven league games this year – and six of their last seven in all competitions – to establish themselves as title contenders.

Along the way, both individuals have shone, with the likes of summers signings Armstrong Okoflex and Thierry Nevers already on eight and five goals for the season respectively; full-back Harrison Ashby having contributed four goals and six assists in 16 Academy appearances; winger Dan Chesters having made his first-team debut; and centre-back Jamal Baptiste nominated for Premier League 2 Player of the Month for October.

But it is as a collective that West Ham U23s have truly impressed so far this season, picking up outstanding results against some of the country’s top academies, including a 6-1 opening-day win over current leaders Arsenal; a 6-0 hammering of Manchester United last month; and a controlled 3-0 victory over Liverpool in the days prior to the break.

A decent start has been made in the Premier League Cup, with three points after two group-stage games, and so Robson assumes control of a team performing well and deserving of their spot in the upper echelons of Premier League 2.

Aspirations of challenging for the title are likely to be tested to the maximum by Manchester City at Rush Green Stadium on Saturday afternoon, however, with the visitors proving runaway champions last season as they finished 14 points ahead of any other side.

It will be intriguing to see, therefore, how Robson sets out his side, with the lead coach telling West Ham TV: “I think it’s important that the boys understand about winning, and they’re doing that at the moment. They’re doing exceptionally well in Premier League 2 and hopefully we can continue that.”

Make no mistake about it – prior to their blip in form just before the international break, the signs were ominous that Manchester City U23s would enjoy another dominant season in Premier League 2.

Coached by a new U23s manager themselves in Brian Barry-Murphy, who arrived from Rochdale over the summer, the Citizens won six of their first eight games, scoring four or more goals on five occasions including against Manchester United, Chelsea and Leicester.

England U21s international Cole Palmer – who started against West Ham in the Carabao Cup fourth round – has been City’s U23s talisman, famously making an appearance in the Premier League against Burnley last month before going on to score a hat-trick in PL2 on the same evening.

The 19-year-old also bagged a treble against the young Hammers last season, who will be well aware of the dangerous winger’s undoubted talent.

City’s U23s also boast plenty of talent elsewhere, with 19-year-old playmaker James McAtee having scored a resounding ten goals in ten Premier League 2 games so far this season; 18-year-old left-back Josh Wilson-Esbrand, formerly at the West Ham Academy, having picked up an assist on his first-team debut in September; and summer arrival Kayky, a tricky Brazilian youth international, looking to make his mark upon his arrival in England.

But two defeats and a draw from their last three games, including a 3-1 home defeat to Tottenham and a 3-2 away loss at Everton, suggests that Barry-Murphy’s team might not prove so dominant in the division this season – with West Ham hoping to capitalise.

Manchester City U23s won both matches between these two sides in Premier League 2 Division 1 last season: a one-sided 5-0 victory in Manchester, followed by a hard-fought – and contentious – 1-0 win in east London in the Spring.

In ten games between West Ham U23s and City U23s since the formation of the Professional Development League, both teams have won four and drawn twice, with the Hammers’ last victory a 5-1 win in Manchester in May 2019 in which current Hammers Aji Alese, Ben Johnson and Amadou Diallo – the latter scoring – all played.

West Ham United U23s lead coach Mark Robson: "I’m really looking forward to it. Manchester City are a really good side. We’ve been looking at them and looked at a few of their recent games. They’ve got a real good bunch of players technically, tactically, who are very good. I think it’ll be a really entertaining game.

West Ham United U23s’ match against Manchester City U23s will be played behind-closed-doors at Rush Green Stadium on Saturday 20 November, kicking off at 1pm. Only key personnel and invited guests will be admitted.

You can still follow proceedings, however, with our live blog on whufc.com from 12.30pm and Twitter updates, and there will be post-match reaction and highlights pieces available over Saturday afternoon and Sunday morning.