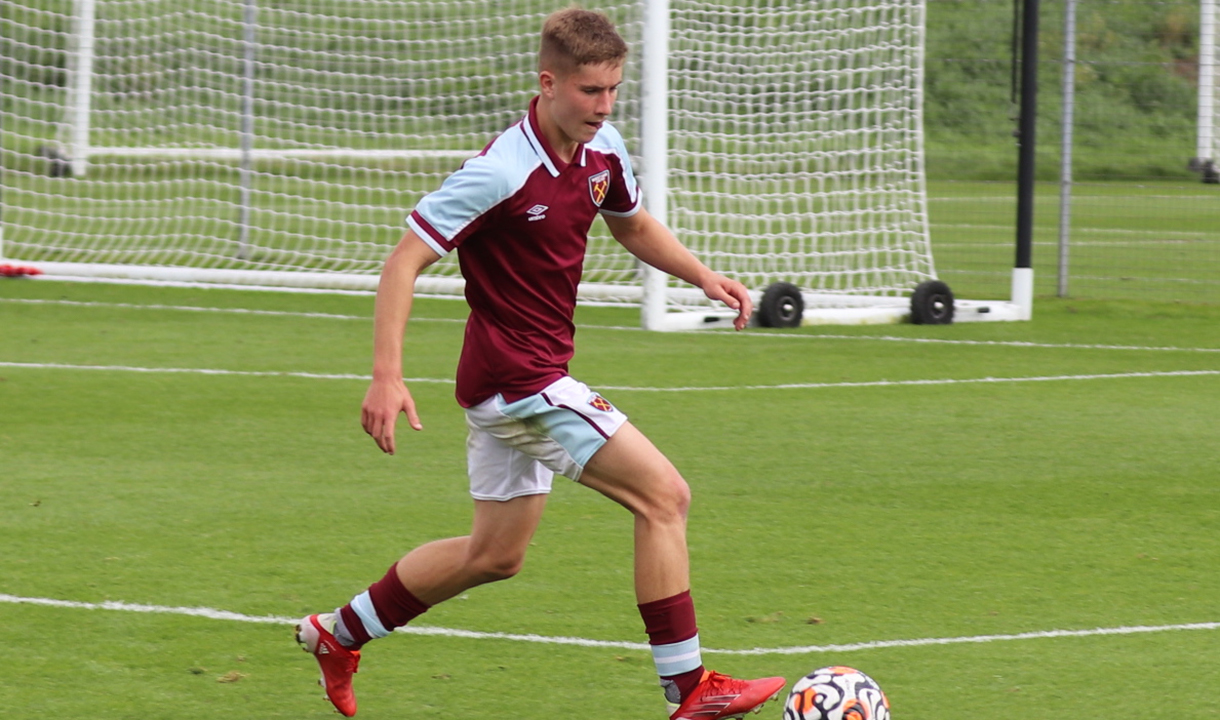 West Ham United U18s made it seven games unbeaten in U18 Premier League South – and a run incorporating five victories – with a fantastic 3-0 win over Arsenal on Saturday morning.

Despite a cagey opening 45 minutes, the Hammers showed tremendous quality in the final third throughout the second half, scoring three well-worked goals courtesy of Regan Clayton, Callum Marshall and Gideon Kodua.

And at the opposite end of the pitch West Ham defended brilliantly again, led by U18s captain Michael Forbes, to keep a fifth clean sheet in their last eigh matches.

In a day full of positives, Marshall found himself on the scoresheet for the second week in a row; the young striker has scored in both his appearances since joining the Academy on a Scholarship deal earlier this month.

Keen made just one change to the side which beat West Bromwich Albion 5-2 in the Midlands last week, with Forbes replacing Oliver Scarles in the starting XI.

Arsenal dominated possession in the early proceedings at Little Heath, but it was the home side who created the opening chance just two minutes in as Divin Mubama got his head to Lewis Orford’s free-kick. The Arsenal goalkeeper, Remy Mitchell, was able to gather in the effort.

Arsenal continued to see a lot of the ball in an opening ten minutes which saw several fouls breaking up play. It was Keen’s side, however, which was able to apply the first sustained period of pressure just before the quarter-of-an-hour mark.

Clayton found space on the edge of the box and his right-footed shot was deflected wide, leading to a flurry of home corners. West Ham continued to press as Clayton enjoyed space on the left flank, switching the play to Lewis Orford who saw his effort on goal blocked.

Orford took the subsequent corner and after a scramble in the box, the ball fell to centre-back Kaelen Casey - his goal-bound strike was deflected behind.

Just short of the 30-minute mark, Arsenal’s Amani Richards drove towards goal but the combination of Junior Robinson and Sean Tarima defended superbly, forcing the winger wide, narrowing his angle at goal. As a result, Richards was only able to find the side netting.

West Ham came closest to opening the scoring in the first half through attacking full-back Clayton once more in the 39th minute, the youngster’s clever effort with the outside of his left foot curling just wide of the post.

Just moments later though, the Hammers were relieved to see Richards misjudge his effort from 10 yards out as he was found in space by Amario Cozier-Duberry after some tricky play by the Arsenal No7 down the left flank.

West Ham came out all guns blazing in the second half and could hae taken the lead inside the first five minutes of the period.

George Earthy found himself one on one with the Arsenal goalkeeper as a result of a great pass by Marshall, but Mitchell made a good save and the ball fell for Robinson, who saw his follow-up blocked.

Just a few minutes later, West Ham took a deserved lead. The Hammers built the attack well down the right-hand side and the cross into the box was cleared out as far as Clayton on the edge of the 18-yard box. The wing-back this time, took a touch and whipped the ball into the top right corner from distance, an outstanding finish which left the goalkeeper with little chance.

Arsenal tried to respond straight from kick off as Cozier-Duberry was able to fire a shot on target, but West Ham ‘keeper Jacob Knightbridge got down sharply and kept hold of the ball.

Arsenal continued to press for the equaliser, but West Ham defended sternly and doubled their lead in the 74th minute. Robinson did fantastically well to get to the byline, but he was unable to find anyone in Claret and Blue with his cross.

The visitors were unable to clear, however, and Marshall got the decisive touch from Earthy’s shot to send the ball into the net and give Keen’s side breathing room.

And it was job well done just ten minutes later as substitute Scarles was released down the left wing. He slid the ball across to Gideon Kodua and the striker lashed the ball into the top corner, capping off a great move, performance and result for his side.

The victory sees West Ham move up to fourth in the U18 Premier League South Division, leapfrogging Arsenal and Crystal Palace and now sitting just five points behind Leicester City in top spot.

“I thought they were slightly the better team in the first half, but in the second half we made a few little adjustments and it came to fruition, which was good.”

Phillips was pleased to see Marshall grab another goal, with the Northern Irish youngster having made a real impact since joining the Club.

“Callum has done really well,” Phillips noted. “He works really hard. He’s not only a goal scorer, he’s really important for the team as well.

“He works really hard for the team and brings others into play. He stuck his toe out for the goal, but they all count!

“He’s had two goals in two games, so that’s not a bad ratio for a striker, and he has a lot more than that to his game as well."

Phillips was also delighted to secure a clean sheet as well as the three points, noting how important it is to credit the defenders and the goalkeeper when they perform well.

He evaluated: “I’m really pleased for the boys, the defence and the goalkeeper. They work really hard but sometimes it can be that only the strikers get the recognition.

“Arsenal are a good side and to keep a clean sheet against them is really good. It’s the whole team, but I’m especially pleased for the defenders.”

Since their defeat to Newcastle United in the FA Youth Cup third round, the U18s have won three games out of three, and Phillips is delighted with the response of his side.

“It’s been a fantastic response,” he reflected. “That could’ve caused huge disappointment which could have led to our season leading to nothing.

“If you look at our league season, we haven’t lost a game since September and we’ve done everything right in the league.

“It’s been really good, Arsenal are a good team… as are Fulham, who we face next week. We’re not in a bad place at all.”